The negotiations between Andorra and Cyprus on double taxation avoidance entered the final stage before the ratification • All PYRENEES · France, Spain, Andorra 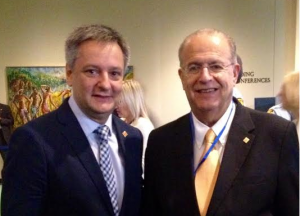 Following the meeting, Gilbert Saboya said that “negotiations on an agreement on avoidance of double taxation entered the final stage.”

The ministers also expressed their willingness to cooperate on the coordination of work in the area of economic diversification.