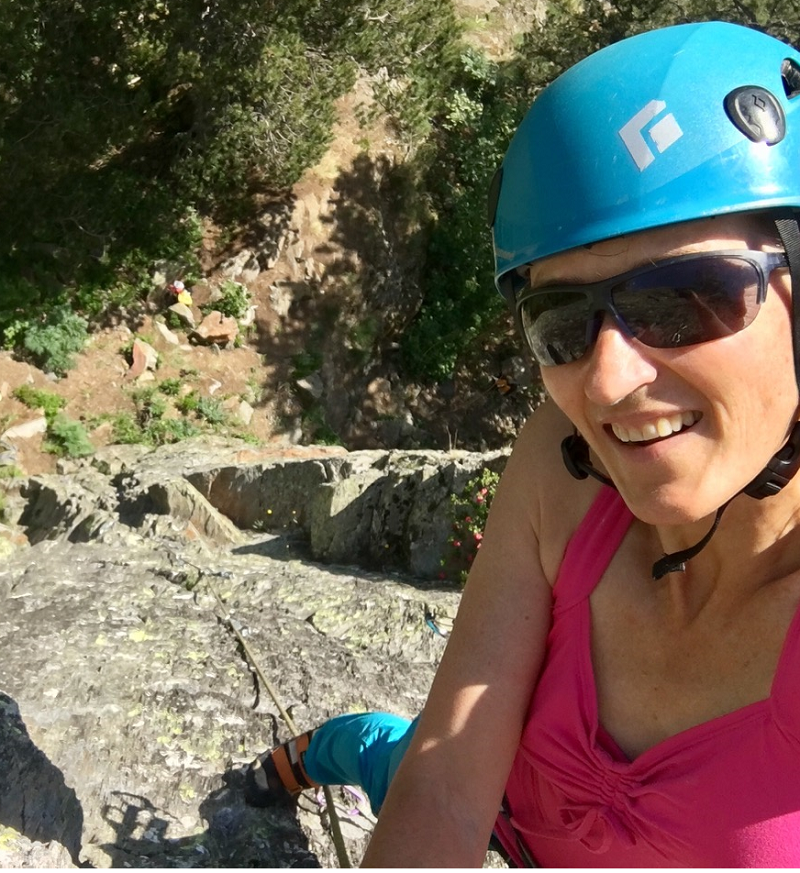 Cathy O’Dowd is the first woman in the world to climb Mount Everest from both sides and the author of the book “Just for the love of it” – the story of her four Everest expeditions. The South African mountaineer has been resident in Andorra for many years. She told all-andorra.com about the many possibilities for climbing in Andorra:

“Andorra has both in-door and out-door climbing areas, and while they are not world-class, there are some lovely places that are well worth visiting.

I live in La Massana and I love the fact there are several places which are just a 10 minute drive and a 5 minute walk away. I can do a few pitches of climbing and still get a day’s work done.

If you have never climbed before and want to start climbing in Andorra you could join Club Pirinenc Andorrà (CPA) or Bloc Cafe sport club – both offer rock climbing courses, but they will take place in Catalan. One mountain guide in Andorra who takes people climbing and who speaks English is Marco Mijares Boeckh-Behrens (he works at Esquí Club Pas de la Casa-Grau Roig).

If you know something about climbing or have done your beginner course there are some interesting possibilities. There are both indoor and outdoor artificial climbing walls (rocòdrom) – some of them you have to pay, some of them are free.

Indoors you can climb at: BlocCafe, Rocodromo de Caldea, and at the Pas de la Casa Centro Deportivo.

There are outdoor artificial walls near Caldea, in Ordino, in Encamp and in Canillo. The Ordino wall is particularly popular, you will find climbers there every afternoon.

Then there are various sport climbing crags – natural rock walls of up to 30 metres high that have been equipped with permanent safety bolts and chains at the top for lowering off. Details of the crags and routes can be found in the climbing & via ferrata guidebook for Andorra “RocAndorra”, written by Patrick Périssé and Aram Ripoll.

There is also one new climbing sector that isn’t in this guidebook: Encodina (the name of little parking place between El Serrat and Arcalis).

A pitch is the length of a rope – climbing ropes are normally 70 or 80 metres long. Climbing is done in pairs and in sport climbing one partner stays on the ground controlling the safety rope, while the other climbs, using tiny cracks and edges in the rockface to gain a purchase with hands and feet. The rope is only used to catch the climber if they fall, and to lower off from the top of the climb.

Equipment for this kind of climbing consists of: Specialised tight-fitting shoes with sticky rubber soles (pies de gato – ‘feet of the cat’, in Spanish.) Chalk powder (magnesio) to dry the sweat off the hands, carried in a small bag tied around the waist – a chalkbag. A safety harness, the same kind that is used for climbing via ferratas. A climbing rope – this must be the right kind of specialised rope, which will stretch when the climber falls, to help absorb the shock. A set of quick-draws – small slings with attached carabiners – which are used to connect the rope to the safety bolts. A belay device (a Grigri is the one most commonly used) that is used to control the safety rope. A helmet is also recommended. Andorra’s specialised outdoor stores sell a wide range of climbing equipment at good prices.

Then there are climbing routes that are more than one pitch (rope-length) long. Some of these are also equipped with safety bolts. The longest of these multi-pitch sports routes (via llarga esportiva) in Andorra are 9 pitches and are found on the granite walls at the border between Santa Coloma and Andorra la Vella, in an area called Roc de Solà.

And finally in Andorra there are climbing routes that are not pre-equipped with safety bolts. You carry your own safety equipment with you, metal wedges and camming devices that are placed in cracks. The first climber (the leader) puts them in and the second climber takes them out again, so no trace is left behind. This is called traditional (trad) climbing (via llarga traditional). There are a few of these kinds of climbs, of which the best is Espolón Norte on Pic de Ribus, in the Circ dels Pessons above Grau Roig. This kind of climbing requires that you own a lot more specialised equipment and called for a higher level experience.

Another possibility in the spectrum of climbing styles is ridge scrambling – it’s more difficult than hiking and requires a good head for heights, but it’s not as technical or as demanding as rock climbing. Andorra has a few interesting rock ridges (crestas / aristas) of which the best is Arista integral Ruf-Rulhe – the ridge from Pic Ruf to Pic Rulhe on the Andorra/France border above Estanys de Juclà.

Andorra also hosts a Circuit d’Andorra d’Escalada Esportiva  each year (competition climbing on the artificial walls). There are four events this summer and autumn. The first one is this Saturday at 5pm at the Ordino Climbing Center. There are categories for children of various ages, and for adults.

Although the climbing in Andorra is good, the climbing venues are small – they are not very high, and are limited in number and difficulty of the climbs. However, within a few hours of Andorra on both the Spanish and French sides is a wealth of world-class climbing areas.

On the French side, the Ariege valley between Ax-les-Thermes and Tarascon-sur-Ariege has a number of excellent crags. However, my favorites places are across the border in Spain. Cataluyna is acknowledged as one of the best places for rock climbing in the world. The closest of the internationally renowned areas to Andorra  is Tresponts – in the Tresponts gorge between La Seu and Organya. You can park on the old road on the south side of the Tresponts tunnel and watch the climbers on the overhanging cliffs on the other side of the river.

Another famous climbing area near to Andorra is Oliana, a cliff about the town of the same name. It is home to one of the two hardest climbing routes in the world. The route is called La Dura Dura, it was first climbed by Czech climber Adam Ondra. It has only been repeated once, by Chris Sharma, an American who lives in Barcelona. It is graded 9b+, currently the hardest grade in the world. Ondra and Sharma are only two climbers who have ever managed to climb something that hard.

Rock climbs are graded according to technical difficulty. The grading system in Europe starts with 1 being walking, 3 meaning you are probably scrambling – using your hands as well as your feet. 4 is easiest grade that would be considered a climb. Then the numbers begin to be broken down by letter a, b and c, and by +/-.

Climbers like Sharma and Ondra are bringing Olympic-level training and athleticism to extreme sport. However, at the easy end climbing is accessible to most people who have the right safety training and equipment. The best training for climbing is to do it, many good climbers train on the artificial walls to be able to do harder climbs on natural rock. It’s not about brute upper-body strength or how many pull-ups you can do.

To be a climber you need core strength, flexibility and technique. For this reason women are often good at it, and yoga, pilates, gymnastics and dance can be more useful as a background to climbing than being able to lift weights in a gym. At its heart climbing is about puzzle-solving – matching the weakness in the rock with your mental and physical abilities to make upward progress.

Children can start climbing as soon as they can walk – it is an excellent sport for increasing co-ordination and teaching skills for challenging fear and managing risk. But children must never be put in an adult harness, they need specific child-sized full-body harnesses and they must wear helmets. Neither age nor extra weight is an impediment to starting. It is a sport for anyone who has a reasonable head for heights.

Done properly, sport climbing is very safe. Almost all injuries are due to human error. But it is a skilled sport, which requires a serious level of safety management. It can be difficult to get started. You need to build experience and confidence over time and it can be hard to find partners at a similar level to you. Joining a club is often the best way to gain experience and meet new friends.

But once you get start, it’s a great sport! There are climbing areas all over the world, many in wild and beautiful locations. It’s free to do, interesting and challenging! And once you have the basic equipment, it’s free – find a friend and go wherever you want”.