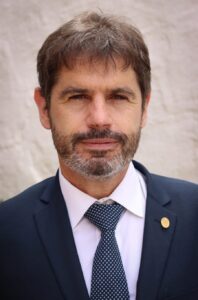 Tossa de Mar (Spain, Catalonia) is a small resort town on the Costa Brava and is 90 kilometers north of Barcelona. This Spanish resort attracts many tourists not only for its beaches but also for its ancient center. In addition, Tossa de Mar has a small castle, which was built to protect the town against pirate raids.

Now the city thrives on tourism activities, and back in the 18th and 19th centuries, Tossa de Mar was known as the main producer of cork, which was used to clog expensive wines.

Mayor Tossa de Mar, Ramon Gascons Tarrés, told us about the plans for the development of the city, its gastronomic traditions and ways to counter the global economic crisis:

“The global crisis affects us all and the entire business world must deal with unforeseen expenses. It must be remembered that it is only the first “normal” season, as the 2020 season was very tough and the 2021 season was also still far from normal.

With this scenario, we must be careful. Inflation and the high cost of services have broken many schemes of what was expected to be a good season.

So, it will be necessary to find the formula to conduct energy saving improvements, renewable energies or building thermal insulation. In this sense, we have changed labor regulations with bonuses of up to 75% for such actions.

Another particularly important point is proper water management. In Tossa, in almost all of our cleaning and irrigation services, we work exclusively with reclaimed water from municipal wastewater treatment plants. We should now be able to gradually transfer this service to companies and individuals to reduce costs.

Our local economy is 95% focused on tourism, although we have some alternative successful business models as seen in a fruit juice producing company and a clothes manufacturing company. Let’s keep in mind that 2020 and 2021 were not very “normal” years for the accumulation of reliable data. These were the years when permitted mobility prevailed over the desire to travel. We hope to analyse this year and accumulate reliable information to be able to conduct selective and effective campaigns.

We also have online project companies, such as a food service platform or advertising company.

The construction and service sectors have grown and consolidated significantly. They worked intensively, mainly in winter, because all proposals for tourism infrastructure must be ready by the start of the high season.

Tossa has a unique characteristic compared to the other towns on the Catalan coast. It is the only fishing town that the Generalitat has listed as a mountain town because the Massís de Ses Cadiretes, the largest forest mass in all of Catalonia that goes from the mountains to the sea, surrounds us.

It is this special trait that has always made Tossa so “beautiful.” It is the duty of all of us, the inhabitants of Tossa and the higher authorities, to keep this special and unique place in the tourist offer of Catalonia.

In this sense, the Generalitat de Catalunya, in the implementation of the Master Plan for Sustainable Soils, helped us declassify many areas that had forever damaged our natural heritage.

The POUM of Tossa, despite these reductions applied to the outer areas of the town, still has many possibilities for growth, allowing us to reach from the current six thousand inhabitants up to seven thousand five hundred.

This is a great example of protecting and fighting for territory. We as people can grow and develop, but our landscape, our environment, which distinguishes us from any tourist offer on the Catalan coast, this landscape we cannot afford to sell to anyone.

The most important thing for me would be to be able to implement social projects that can make Tossa a good place to live and visit. Among these projects, I can mention the improvement of the promenade, the rehabilitation of the municipal museum (Tossa inaugurated the first contemporary art museum in Spain), as well as the improvement of a school, a kindergarten and a municipal summer camp.

As for a kindergarten, we had to adapt this project to the new regulation of the Generalitat of Catalonia, according to which two-year-old and one-year-old children will attend the nursery free of charge.

Among other projects we have presented to a European fund and have been awarded are the following: repairing the patrol road on the Garbí side that was hardest hit by Hurricane Glòria, improving car parks via a digital App, improving the signage of places of interest, adapting a new city park to increase the comfort of residents to cope with the new heat…

However, our municipality still has many needs that we are identifying and which we will implement as long as possible.

We keep statistics and have all the data about the origin of our tourists, as well as information about whether they come alone or with family, whether they visit beaches, cultural or gastronomic events.

The decrease in mobility during COVID prompted us to conduct selective advertising in different places or sectors, such as inland Catalonia or Automóbil Club Hollandes, and despite the difficulties (because it was not easy at all), we managed to become one of the best destinations who worked the most in 2000 and 2021.

In terms of culture, we have the Petit Paradís festival, which is consolidating itself as a benchmark among summer festivals on the Costa Brava.

The MiC European football championship, the half marathon, the Iron Man, the MMdT exhibition “NO EXIT,” the cinema on the beach, the sardanes, and the classical concert at the top of Vila Vella among other events have also occurred.

Almost every weekend, from Easter to Christmas, you will find some type of activity or event.

Our traditional cuisine is one of our best attractions! We don’t have competitors!

We come from the culture of baking food, the xup xup. We use local products and, most importantly, we use traditional recipes that have been passed down from grandmothers to daughters and from grandfathers or old fishermen to sons.

So, one of our star dishes, the cim i tomba, is born from the kitchen “a bordo.”

Success lies in preserving local traditions and knowing how to use them. I invite you to come and try it and you will enjoy it! See for yourself, the second most popular request on our website is gastronomic offers.

Tossa has a road in very good condition that connects us with the great central corridor of Catalonia, allowing us to travel to the airports of Barcelona, Girona, Perpignan or high-speed train stations, in the case of airports without crossing any cities.

We also have maritime transport with cruises that connect the neighboring towns with Tossa during the summer, as well as a discretionary coach service with Barcelona and Girona.

Tossa Castle is the only remaining example of a fortified medieval town on the Catalan coast. There had been a castle at the top of the old town which disappeared more than a century ago, with the construction of the lighthouse.

Now, what we see are “Ses Muralles,” which have their origin in the fortification of the town.

In the past, Tossa was a continuation of the abbey of Ripoll, overlooking the sea. To protect its interests, the abbey contributed to the fortification of the old city and the surroundings of the old church of Sant Vicenç, and it was here that the whole story was born.

When serious problems arose, as in all fishing villages, the inhabitants fled Vila Vella and took refuge in places like Torre dels Moros and other places that were very far from the coast.

VIlademont Vilademont one of the most mysterious places in Tossa.This place is our origin. In the past, the population was very small and spread over the Pla de Sant Benet and the Massís de Ses Cadiretes and the activity involved much more agriculture and forestry than fishing or cabotage. The urban core was hidden in the mountains and the population was not close to the coast as they were fearful of ships from foreign lands attacking them.

In this environment, as you can imagine, there are legends and stories of all kinds.

The Pilgrim or “Vot of the people” is a popular tradition of the city of Tossa, which is celebrated on January 20. Traditionally, the Pilgrim Father must make a pilgrimage of more than 40 kilometres from Tossa de Mar to the city of Santa Coloma de Farners. The history is following. Tossa, like many other cities, was attacked by the plague. The population prayed for deliverance from this terrible pandemic and one day decided to send a pilgrim to the nearby chapel of Sant Sebastià to continue his prayers there. Having fulfilled this vow, the envoy freed the population from the plague.

And it so happened that since that year the pilgrimage has never stopped. Neither war nor pandemics stopped this tradition, which is so rooted in the city.

The Pilgrim Father, chosen from a list that only the priest and Sindic know about, goes to Santa Coloma on a pilgrimage on foot. In front are those who make the pilgrimage with bare feet, and behind those who are in shoes.

They spend the night in Santa Coloma and return to Tossa the next day. When they arrive in the evening, there is an emotional procession in absolute silence, with kettles full of hot tea. During the procession, when the Pilgrim Father arrives at Es Socors Chapel, it is announced that “the oath has been fulfilled.”

This is a very deeply felt tradition, and at this moment of renewal of the vow, there is a general feeling of the beginning of a new stage, a new year and, of course, the expectation of the next pilgrimage.

The tradition falls on January 20 and 21, so the expression “instead of counting the years, let’s count the pilgrims” is very typical of Tossa”.