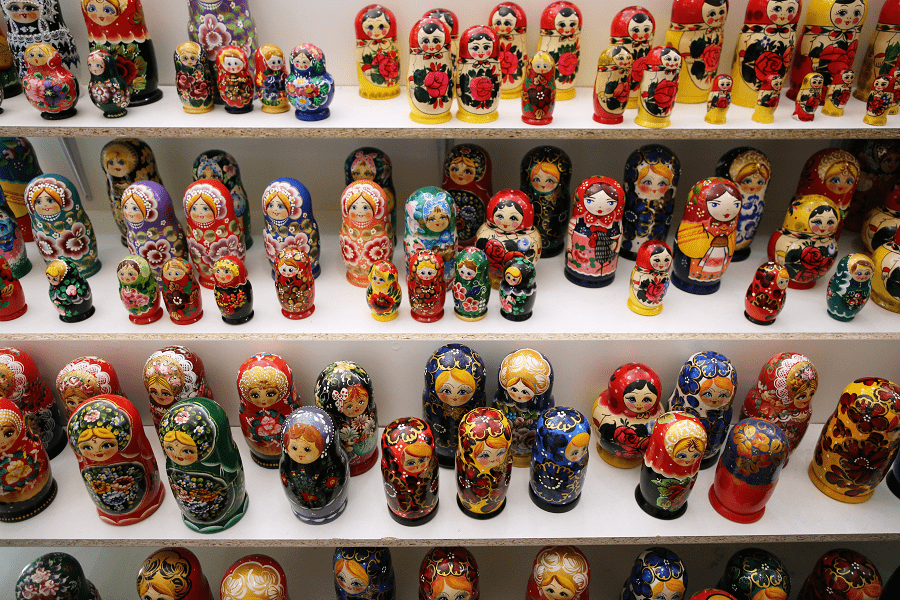 Matryoshka dolls (Russian: матрёшка), also known as stacking dolls, nesting dolls, Russian tea dolls, or Russian dolls, are a set of wooden dolls of decreasing size placed one inside another.

The number of nested dolls is usually three or more. Traditionally they are egg-shaped with a flat bottom and consist of two detachable parts, upper and lower. Traditional nesting dolls depict a woman in a red sundress and a scarf. In our time, the themes for painting are diverse: fairy-tale characters, girls, as well as families. Matryoshka dolls of a parodic nature with the image of political figures have also become common. Relatively recently, the nesting doll with the image of a portrait began to gain popularity – a portrait nesting doll.

The technology for making a painted wooden toy from several items nested in each other has been known in Russia for a long time (Easter eggs can be cited as an example).

It is believed that the Russian wooden painted doll appeared in the 1890s, when the rapid economic and cultural development of the country was accompanied by a rise in national identity and interest in Russian culture. During this period, an artistic movement known as the “Russian style” arose in the Russian Empire. His followers, in particular, were engaged in the revival and development of the traditions of folk peasant toys. In Moscow, the workshop “Children’s Education” worked in this direction, where the artists first created dolls, the outfits of which repeated the festive women’s clothing of the inhabitants of the region. 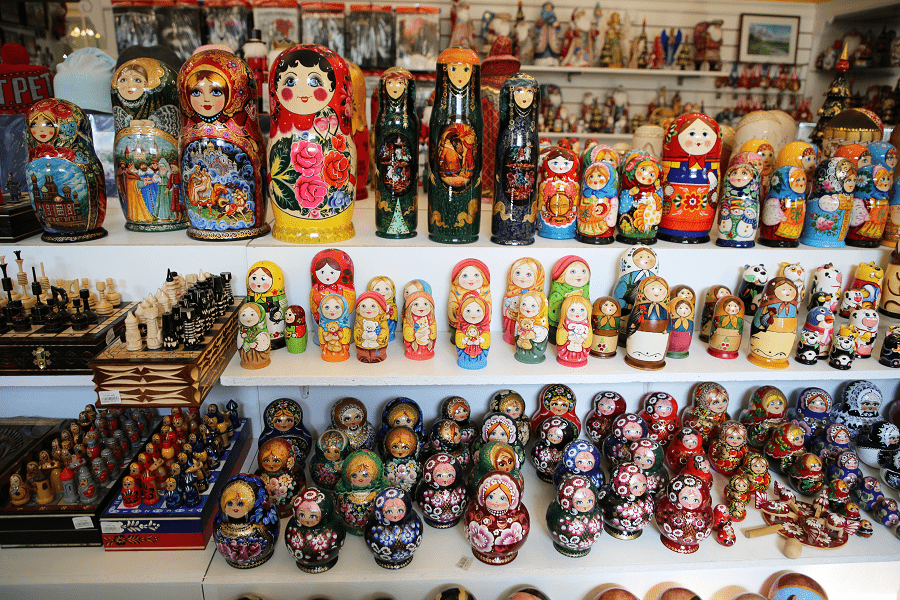 The first eight-set doll made in 1890 by V. Zvezdochkin and S. Malyutin (called “Matryona”) was a chubby peasant girl in an embroidered shirt, sundress and apron, covered with a colorful scarf, in whose hands was a black rooster. A boy followed a girl with a black rooster, then another girl. All figures differed from each other, and the last, eighth, depicted a swaddled baby.

In 1890, their mass production began as toys and souvenirs.

Ordinarily, matryoshka dolls are crafted from linden wood. There is a popular misconception that they are carved from one piece of wood. Rather, they are produced using: a lathe equipped with a balance bar; four heavy 2 foot (0.61 m) long distinct types of chisels (hook, knife, pipe, and spoon); and a “set of handmade wooden calipers particular to a size of the doll”. The tools are hand forged by a village blacksmith from car axles or other salvage. A wood carver uniquely crafts each set of wooden calipers. Multiple pieces of wood are meticulously carved into the nesting set.