A painting named "Mata Mua" by Paul Gauguin is one of the gems of Baroness Thyssen’s collection today, it's one of the most expensive paintings in the world, 400 mln US dollars, thinks Guillermo Cervera, Art director of the new Thyssen museum in Andorra • All PYRENEES · France, Spain, Andorra 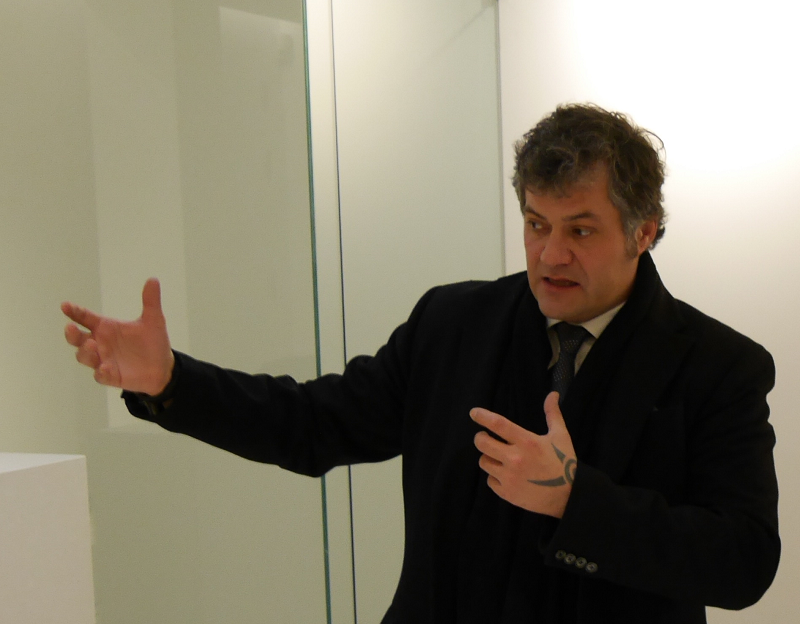 On 16th March a new museum of arts by Baroness Thyssen opens in Andorra, Escaldes. All-Andorra.com is talking to the Art Director of the museum, Guillermo Cervera about the first exhibition’s content and his vision of the modern art market today:

Which artists’ work will be presented in the museum’s first exhibition? From which periods of creativity will they be?

Other paintings include: works of art by the expressionists Karl Schmidt-Rottluff and Max Pechstein. Walt Kuhn presents an American realism piece, the Russian artist Varvara Stepanova presents some work from the cubism era, Henri Matisse some fauvism concepts, and Joaquín Torres García will include an abstract constructivism.

What are the policies regarding the content of the first exhibition? Why did you choose these artists and these art trends?

The exhibition’s title – “Escenaris: de Monet à Estes; de Trouville à Nova York” (“Scenarios: from Monet to Estes; from Trouville to New York”) is a metaphor: there is a connection between all of these paintings. Chronology shows that all these artists were in search of something new, the selected paintings contain something new in the creation of each of them. It is the search, psychological and social, which is reflected in all the paintings exhibited.

I thought to start with a long term first exhibition. The duration of this exhibition will be 10 months (from 16th March 2017 to 14th January 2018). It was prepared in such a way as to interest the maximum number of tourists coming to Andorra. The tourists who come in the winter are different from those who come here in the summer.

How long did it take to agree on the issues and conditions necessary for the successful opening of the exhibition?

We have been working for about 2 years on the creation of this exhibition. But on a technical level it has been only one year. The work was very intensive, we worked 7 days a week, to get where we are today.

Whose idea was it to open a museum in the old building of the hotel Valira?

We’ve been looking for a building in the centre of Andorra’s tourist district for a long time. It was difficult to find the right place where we could make a museum of such high quality. I do not remember exactly who suggested the first floor of the Hotel Valira, but this idea seemed very promising. The building is well located, it has an interesting and beautiful history, which is also important for the aura of the museum.

Who is the owner of the building?

It is a private property, the building belongs to the Andorran Ribas family.

Who is responsible for the technical issues, such as security?

I am, as director of the museum, responsible for all these types of issues, including security signaling, maintaining the desired temperature in the building, the ventilation air system, and for constant cooperation with the police and fire department. But we are certainly working closely with the Andorran government on all these issues directly as well.

Why did you decide to open a museum in Andorra?

The idea came a long time ago. I’ve been living in Andorra for several years. My father – the brother of Baroness Carmen Thyssen – and the baroness herself, live here. And we found the idea to open a museum here very attractive.

Which artists will have their work presented in the next exhibition?

How many works of art are in Baroness Thyssen’s collection?

In total there are about 1,300 works which include some sculptures, but the majority are paintings.

What is the estimated value of the collection?

I can’t say exactly. We are talking about billions of euros.

What are the most expensive paintings in the collection?

I can name one of the paintings, which is a gem that will be shown in the exhibition.  This is the painting “Mata Mua” by Paul Gauguin. It belongs to his Polynesian period. According to international experts, this painting is probably the most expensive in the world today, about 400 mln US dollars.

How many museums exhibit paintings from the Baroness’ collection?

Alongside these, about 800-900 works of art from Baron Thyssen’s collection are owned by the Government of Spain.

All of these exhibitions are an excellent opportunity to promote art at an international level.

How much will a ticket cost?

In your opinion, how many visitors do you think will visit the museum during the first year of the exhibition?

I think at least 60,000. We are opening a museum – it is a fact. But we need to be patient because this fact needs to be promoted at an international level. The opening of this museum is a great complement, an additional offer, to the so-called travel package for many tourists who come to Andorra.

Can anyone buy the works of art in your museum?

No. My aunt is a good collector. She buys, but doesn’t sell. The museum in Andorra is not a private gallery. This is what we call a national heritage collection, like the Prado Museum or the Hermitage, but much smaller.

Art trading is not our family’s interest. We are interested in the organization of exhibitions. Our goal is not to trade in the art market, but to promote art worldwide.

The Andorran Government adopted amendments to the Customs Code in order to exempt the payment of tax duties on art works imported into the territory of the Principality in order to organize public exhibitions. Was this decision lobbied by you?

No, it was the Andorran Government’s idea. It was done in order to promote the arts at a state level, to ensure the free movement of works of art to educate. It is an absolutely brilliant idea in my opinion.

What are the main trends in the contemporary art market? Which artists are the most expensive today?

Avant-garde is very popular today. Frankly, it is difficult for me to understand, but it’s the reality.

Impressionists still have a very strong position and are very expensive in the market. Lately a piece by Claude Monet was sold at Sotheby’s for 85 million dollars. As for the paintings of the Impressionists on the market right now there are little offers, there is no movement. All paintings are purchased and are in private collections or national collections. Prices will not fall. Perhaps, on the contrary, they will grow.

Contemporary art is also trendy today. On the other hand, artists from the XVII-XVIII century are not so fashionable. But the situation in the art market is cyclical. In 10-15 years, the situation may change.

All 26 paintings of the exhibition: