Marc Almond: And Now the Underground is Overground • All PYRENEES · France, Spain, Andorra 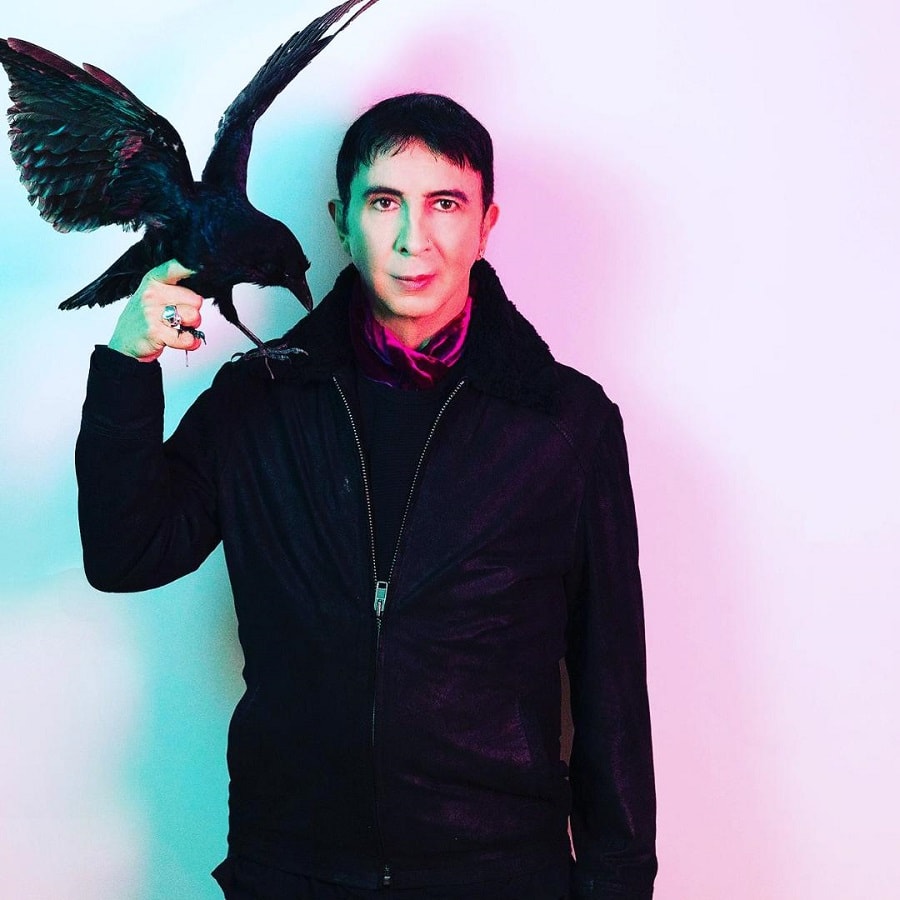 Marc Almond talks about his last album “Chaos and the Dancing Star”, the massive 40 years anniversary Soft Cell show, surreal experience of being honoured by Order of British Empire, his way of life during pandemic days in London and much more as well

Marc Almond is an artist with a wide heritage that can cover preferences and tastes of different audiences. Some of the people admire him as an electronic music pioneer for his synth-pop duo Soft Cell where he took part with his musical partner Dave Ball in the beginning of the 80s.

Others love him for the impressive amount of catchy and understandable pop-hits that he released throughout his career in the ‘90s and 2000s.

Some of the fans appreciate most of all Marc’s expressive covers of other people’s songs, which includes the creative legacy of Russian Romance and Soviet songs, Charles Azanavour, Jacques Brel and much more.

Being in the musical business already for 40 years Marc Almond knew big ups and downs, but he always carried his unique artistic charisma based on a dramatic pitch heavily influenced by his passion for torch songs. His contributions to the British culture with 25 solo albums and 30 million records sold worldwide, recently were highly acclaimed as a part of the national cultural DNA when Marc was honoured Order of British Empire (OBE).

We had a lucky chance to have an interesting chat with Marc about his new album “Chaos and the Dancing Star”, working with the legendary Ian Andersen from Jethro Tull, the pick moment of Soft Cell last anniversary show, his emotions about receiving OBE, way of life during pandemic and other interesting things.

Hi Marc! Thank you very much for finding time for this interview. A few months ago, you released a new album “Chaos and the Dancing Star”. Looks like the songs have very personal themes, and the lyrical mood is quite different to your previous work “Shadows and Reflections”—which was mostly an album with covers of other people’s songs?

I started the album “Chaos and a Dancing Star” several years ago after I finished “The Velvet Trail” with the same co-writer and producer Chris Braide, but then I signed a deal with BMG Music in the UK and the contract said they wanted me to do a covers record first then an album of original songs. So “Chaos and the Dancing Star” was put on the side-line, and I recorded “Shadows and Reflections” with a different producer Mike Stevens, an album mostly of covers of 1960s and 1970s songs with two original songs on it.

It’s different musically to “Chaos and the Dancing Star” also took time to record an album with Jools Holland called “A Lovely Life to Live”. So you can say “Chaos and the Dancing Star” was recorded slowly over five years. It is a follow-on album from “The Velvet Trail” in many ways for its apocalyptic, death and rebirth themes on some songs. Chris and I originally wanted to do a prog rock album, but it developed into more of a song collection. It features Ian Anderson from the legendary Jethro Tull on flute on the track “Lord of Misrule”.

How was working with such a legendary artist like Ian Anderson in terms of competence and personal relationship?

I’ve known Ian for a little while now and I’ve sung with him at some of his cathedral shows that usually happen around Christmas. I’ve also taken part in a performance of his classic album “Thick as a Brick” at the Albert Hall London which was a great pleasure.

A lot of people wouldn’t expect it, but I’ve been a Jethro Tull fan since I was 13 years old, and the first single I bought was “The Witches Promise” by Jethro Tull. It was surreal to sing this song on stage with him a couple of months back. It closed a circle of life for me. Ian’s a fantastic, interesting and creative person as well as a bona fide rock legend.

You actually known for a lot of collaborations with different big and talented artists besides Ian Anderson. there artists you really admire and would love to have a chance to work with?

I don’t have any plans to work with any particular musician at present, I prefer for things to just happen out of the blue. They’re the things that work best. I have plans for collaborations now as it’s always a problem behind it.

You had a few atmospheric and stylish videos for the songs from the last album, like “Slow Burn Love” and “Hollywood Forever”.

Do you have some favourite director with whom you prefer to work, or do you experiment each time with different directors? And maybe you can name some favourite videos that you have ever done?

I loved to work with the director Tim Pope who did a lot of my early videos, he did a great video for the song “A Kind of Love” a couple of years back.

Usually, I prefer to work with new young directors and filmmakers who have fresh creative ideas. The days of big glossy expensive video clips are over; they are mostly seen on social media forums now so are a little more lo-fi which I like

The last few years were intense and successful for your career. Certainly, one of the biggest things that happened is the last anniversary Soft Cell show at O2 Arena. The band was on hold around for 20 years—last album and reunion tour was in 2001. Can you please tell me a bit about this affair—how did the idea come to you and what are your feelings about this show?

It just happened unexpectedly after a meeting with Dave Ball, the first time we’d spoken in 17 years, to discuss the Soft Cell box set that Universal Music was putting out. Dave curated it and put it together, and it’s a lovely collection in a beautiful package.

We talked about the possibility of doing a live show even though I’d said no for years—it suddenly seemed exciting. We chose the biggest venue in London, the O2 Arena, with a capacity of 18+ thousand people. We thought we would struggle to fill it, but It sold out on a weekend. It was a long show to please all the fans, the pop fans, dance fans, goth fans and those who like the darker left field side of Soft Cell. It was also shown in cinemas at the same time live across the world to a huge audience. It’s available on DVD now. It was a difficult show technically to put together but wonderfully visual. When we played “Say Hello Wave Goodbye” at the end and the phone lights went on it was very emotional. We won’t do another live show, that was it. How can you top it?

Do you think it is the last ever achievement with Soft Cell or something can happen in the future?

We plan to do an album and I’ve been writing songs for it but let’s see.

The other big thing that happened was, of course, receiving an OBE. What kind of moment for you was it like for an artist with a kind of rebel roots—a surreal and grotesque one or it was a vitally important thing for you?

I thought it was a great moment of recognition not just for music but for charity support I’ve done. Yes, it was surreal, but I didn’t want to miss this experience. It made my mum happy and she went to the palace to the ceremony with me. I have to accept at the age I am I have become part of the DNA of the UK and accepted by a larger public. I still like to be a bit of a punk and anti-establishment when I can, but I can’t get away with being transgressive and subversive anymore. Well, only occasionally. People accept you for being that and now the underground is overground.

And the other big thing that will be hard not to mention is your receiving of an honorary doctorate at Edge Hill University—how did all this happen and was philosophy always a life interest for you as a discipline and what philosophers do you follow?

I have no idea why they made me a doctor of philosophy. Maybe because I’ve followed my own philosophies of life and others have followed mine. I’ve tried to read Friedrich Nietzsche; I even called my last “Chaos and the Dancing Star” after a quote from “Thus Spoke Zarathustra”. He is just too damn complicated. Interesting, though. A younger me can relate to his nihilism.

Are you in London now and how do you fulfill your days during the pandemic and what are your general feelings about this coronavirus situation?

No one took it seriously at first, but now they are. Who’d ever thought there would be mass graves in New York. I’m sure things are bad there too. Here there is a bigger death toll every day and we’re confined to our houses for most of the time. I have up and down days and sometimes I feel demoralised, but I am lucky in my life. I think of others who are not. It’s heart-breaking, but I’m coping well and using my time well. I needed to take a break; I just would have liked it to be my choice when. I’m resetting the clock. I’m writing, catching up with my favourite old movies and posting low fi torch songs from home on my Instagram. No microphone, makeshift settings, I love that everything has gone so low fi now.

It’s going to change us all for better or worse, and I hope we will be a better society. I’m re-evaluating life, but I can’t wait to get back to performing on stage again

What will be the first things you will get finished after everything will get back to normal after a pandemic?

I am working on a new one-man operetta based on Joris-Karl Huysmans decadent novel “A Rebours”. We may do another Soft Cell album, as I mentioned, but everything has been put back due to the current situation. I hope I come back to Russia as it’s always in my heart and thoughts and my fans there. I hope everyone is keeping safe and getting through this ordeal

Marc, we wish you to fulfil all these exciting plans as soon as possible and thank you very much for this interesting talk.