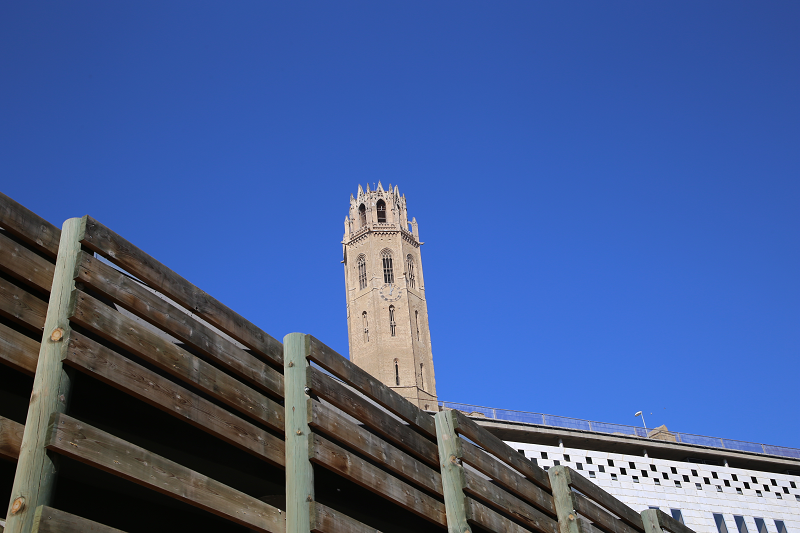 The history of Lleida (sp. Lérida) has evolved around the hill of la Seu, since it has always been the place where the representative infrastructures of the social control power have been located: the Andalusian fortress (La Suda) and the mosque, and later the cathedral (La Seu Vella). The hill was, moreover, a good defense place from possible attacks, and soon it was surrounded by walls. These were no longer useful with the arrival of the industrial and demographic revolution of the 19th century. Once demolished, Lleida was able to expand along the plain, though, having to overcome the obstacles presented by the River Segre and the railway, which was built without forecasting that the city would grow as it did.

In fact, its situation as an important center in the communications network goes back more than twenty centuries, to the conversion of the village of llergetes to the new way of doing things of the Romans, who, at the time, were expanding into the interior of the Peninsula. In this way Iltirta (Lleida) became a settlement that was a place of passage on the way between the interior (Huesca and the northwest of the peninsula) and the sea (Tarraco, Barcino, and from there to the Itálica peninsula).

Lleida became the new capital of the Iberian tribe that the Roman authors called Ilergetes, after they abandoned their old capital, the city of Atanagrum (Tornabous). Iltirta was located on the hill of la Seu Vella, on the banks of the Sicoris river (Segre), where Iberian remains of little entity have been found, which corresponded to the 1st century BC, in the middle of Roman rule. Strabo mentions the cities of Ilerda and Ileosca (Huesca) in the country of the ilergets.

The coins of ilergets that were found, which would be dated to the Roman Republican period, had an Iberian inscription that read ilt (ze) rd (from il = height and tzerda or tzurda, referring to the people that had it), Pliny calls them ilergetes surdaonum. Some coins were related to the towns of Massília, Cose (Tarraco) and Salauris (Salou), which showed that Iltirta was an important place involved in commerce. People of Iltirta also showed their love of independence, through the resistance that they stood first to the Carthaginians, directed by Istolaci and Indortes, and later to the Romans under Indíbil and Mandoni.

Lleida took the name of Ilerda during the Roman period. The city was elected by the legates of Pompey, Afranius and Petreius as the defense base of Hispania in 49 BC. The legates had five legions in Ilerda; Ilerda was besieged by Caesar and the city surrendered; Lucius Afranius and Marcus Petreius were freed thanks to the generosity of César but did not honour their word.

Under the empire, at the time of Augustus, it was first a city and then a municipality, according to the coins that are preserved. Furthermore, the foundations of a Roman bridge over the river Segre are still preserved.

In 449 the Vasconic bagaudaes led by Basili had allied themselves with the Suevic king Rechiar and attacked the town of Turiaso, where the foederaties were with Bishop Leon, who died in the attack. With Rechiar they raided Lleida and then Saragossa.

Lleida was dominated by the Visigoths at an uncertain date in the fifth century, it was bishopric throughout this period.

Its Arabic name was Làrida (Lārida) on the bank of Nahr al-Seghire old Secoris. The exact date in which it was conquered is unknown, but it was after Zaragoza and Tarragona, which had been taken without a fight. According to al-Razí, the region of Làrida was looted and devastated by the Franks in the 8th century and by Hispanics who emigrated to France.

It was the capital of a district (amal) of the Upper March (al-Thaghr al-Ala) from which other towns and a large number of castles and fortresses depended. It was located on a fertile plain surrounded by gardens and orchards and one of its main sources of wealth were the high-quality linen plantations that were sold throughout the March. Gold was found in the river. The district included the plains that went to Cinca (Nahr Zaytun) with olive groves and vineyards. Many farms (diya) had land for cereals and pastures. All rural entities (daya) had a fortified watchtower (al-burdj) with underground galleries where the people could shelter in case of attack. It was an obligatory point of departure on the military route towards the Upper March and an important element in the defensive system. It was governed by walis with military attributions, and due to its distance from Córdoba, the authority of the emir was often nominal. The Banu Qasi on one side, the Banu Tawil on the other, and then the Tugibites, all occupy the history of the region during the 9th and 10th centuries.

In the year 942 a Hungarian raid crossed and plundered the plains of the Carolingian counties, especially the counties of Besalú and Girona. They arrived at the gates of Barcelona and then headed to the walls of the Andalusian city of Làrida, where they were defeated by the Muslim army. Later in their flight to cross the Pyrenees they were defeated at the battle of Baltarga by a union Catalan and Provencal hosts.

The walis of Làrida faced the Counts of Pallars and Barcelona several times, alone or with the help of troops from Córdoba. At the beginning of the 10th century, Lubb ibn Muhàmmad ibn Qasi built the great mosque on the upper part of the fortress. In the last third of the 10th century, Rashid al-Barghawati appeared as cadi, who received an order to hand over to Hashim ibn Muhammad ibn Hashim al-Tugibí, the son of Muhammad ibn Hashim al-Tugibí, the district of Làrida, which remained at the hands of the Tugibites until 1018 and nominally until 1037 when Sulayman ibn Muhàmmad al-Mustaín, a Tugibits officer in Laida, was proclaimed Emir and founder of the Banu Hud dynasty.

In 1039 Sulayman conquered Zaragoza. At the death of Sulayman in 1046 his son Yusuf ibn Sulayman al-Mudhàffar received Làrida, which he already governed while his father was still alive as his delegate. In 1064 he lost Barbastre and his brother Abu-Jafir Àhmad ibn Sulayman al-Múqtadir who had received Saragossa, blamed him for the defeat, their relations became tense and Abu-Jáfar Àhmad ibn Sulayman al-Múqtadir de Saraqusta occupied Làrida in 1079. When Àhmad died he left the Emirate of Làrida, and those of Turtuixa and Dàniyya, to his son al-Múndhir Imad-ad-Dawla (1082-1090), who made an alliance with Berenguer Ramon II, the count of Barcelona, against El Cid. On his death (1090), the kingdom of Làrida passed to his young heir Sulayman Sayyid-ad-Dawla (1090-1102), the last of Banu Hud.

Subsequently in 1102 it fell into the hands of the Almoravids, and remained in the hands of Saharan governors, of which the best known was Abu-Hilal, also known as Avin-Hilet or Avifelel, who made an agreement with Ramon Berenguer III in 1120 to avoid the fall of Larida to Aragonese hands and block their progress towards the Mediterranean. They advanced to Aragon and conquered Saraqusta in 1118. Alfons el Bataller, who aspired to conquer the Emirate, became angry and sieged the city in May 1122. In March 1123 a castle was built in front of Larida, where Ramon Berenguer III and Guillem IX of Poitiers faced against Alfons el Bataller but were unable to lift the siege, which the Bataller did in June 1123. After the conquests of the fortresses by Ermengol VI of Urgell and Ramon Berenguer IV of Barcelona, the wali al-Muzaffar ibn Sulayman had to surrender to the Catalan counts on October 24, 1149. The wali was able to leave to Mallorca with 200 horsemen.

When Lleida joined the County of Barcelona, it integrated into a new North-South network, structured around the rivers, while continuing in the east-west network that was going from Barcelona to Sant Jaume de Galicia. It is during this medieval period that the Tribunal de Coltellades was created. Within the feudal legal system in 1150 a settlement card with broad rights and freedoms is granted to Lleida. In 1197 Pere I gave it the title of a municipality and in 1264 James I granted it the Privilege of Concession of the Paeria (city hall of Lleida). In the 13th century, the Estudi General de Lleida (an institution of higher education) was created, it was one of the main cultural centres of the Middle Ages. In the city, in 1336, King Peter IV of Aragon was sworn in as the count of Barcelona.

In 1364 Na Eleonor presided over the Catalan courts. In 1410 it passed to Ferdinand I of Aragon on the death of Martin of Aragon and held the courts presided over by Queen Maria. James II of Urgell attacked the city and besieged it in 1413 (see siege of Lleida of 1413) but was recovered. Under the King John II the prince of Viana was taken prisoner in Lleida, it happened during a celebration at the courts, despite his position as an ambassador. The people of Lleida rose up against this injustice by declaring him the prince and the king had to flee from the city to Fraga. In revenge John II besieged Lleida in 1464, the city resisted for some time until it surrendered honorably by swearing the king’s fueros and privileges of the city.

In 1519, Emperor Charles V (Charles I of Catalonia) visited the city; Philip II visited it in 1585. At that time the area was infected with bandits. In 1589 a plague decimated the population. In 1610 the Moriscos were expelled. During the Reapers War the city was one of the main scenes of the conflict. It resisted the Castilian attack in 1642 but fell into Spanish hands after the siege of 1644 when it surrendered to General Felipe de Silva on August 2, 1644. In 1645 the French and Catalan troops approached to Balaguer and Camarasa, to be able to besiege the city in 1646 and 1647, but without success. In 1677 the Lleida crop fields were devastated by a terrible flood.

During the War of the Spanish Succession shortly after the capture of Barcelona, the allied offensive occupation of the Catalan countries continues. Lleida falls into the hands of Manuel Desvalls and Vergós on 23 September 1705, but in 1707, it underwent a new siege that supposed its fall into Bourbon hands and the destruction of many of its buildings. After the abolition of privileges the university was transferred to Cervera.

During the French war Lleida was occupied by Marshal Suchet after a siege; Suchet, after having raided Valencia, returned to Catalonia and on April 13, 1823, he showed up at the walls of Lleida with 13,000 men; the city was defended by 8,000 men sent by General García Conde; a relief army commanded by O’Donnell was defeated by the French who then stormed the city by a hole in the Carme wall; Lleida was under siege for three days. Baron de Eroles tried to recover it, taking advantage of the confusion caused by the explosion of the gunpowder, but he was repealed.

In 1833, it was declared a provincial capital. The first newspaper published in the city was El Alba Leridana, active throughout the decade of 1860, expressing the ideology of the Catalan Renaissance, although the newspaper was published in Spanish.

During the Carlist wars there were no significant events in the city. On April 3, 1938, during the Spanish Civil War the rebel national troops of Francisco Franco conquered Lleida