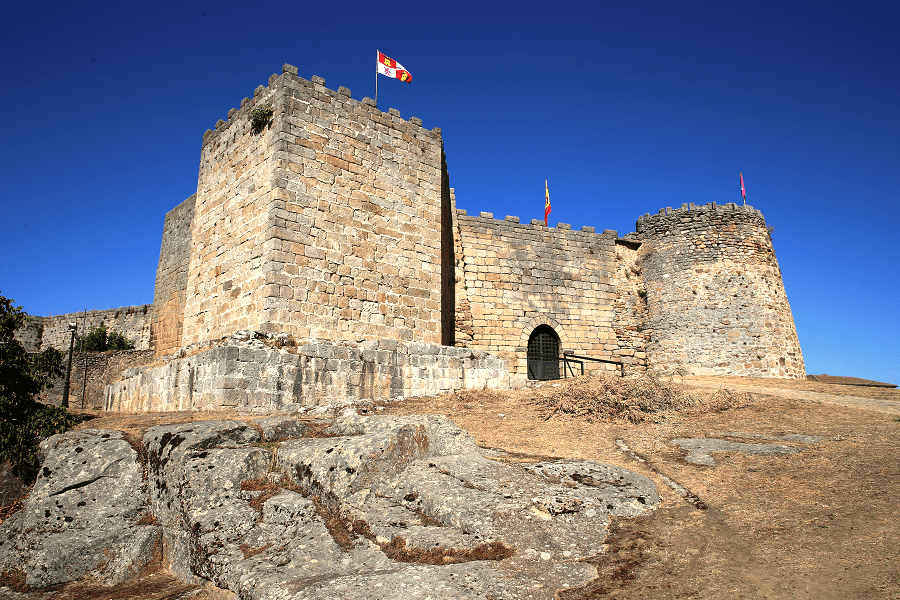 Ledesma is a city and a municipality in the province of Salamanca, Castile and León, Spain.

The town has a rich architectural and ethnographic heritage, a direct consequence of its long history. For this reason, the town was declared a historical-artistic complex in 1975, in addition to having other assets of cultural interest such as the Puente Mocho, the church of Santa Elena, the church of Santa María la Mayor and the fortress. 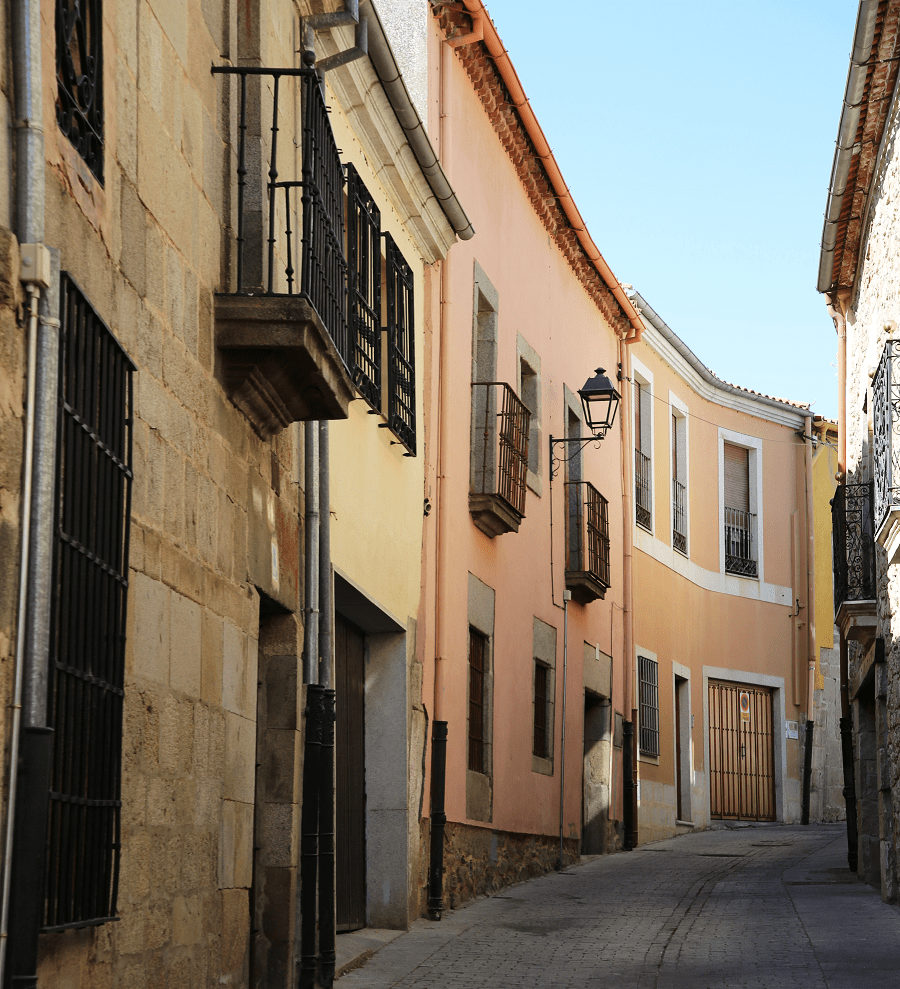 In addition, there are notable cultural samples, their own or adapted, whose main exponent is perhaps the Corpus, the Calendas, the Águedas, the Carnival, the Quintos, the Holy Week, the Monday of Water, the Carmen or the Festivals of Summer. 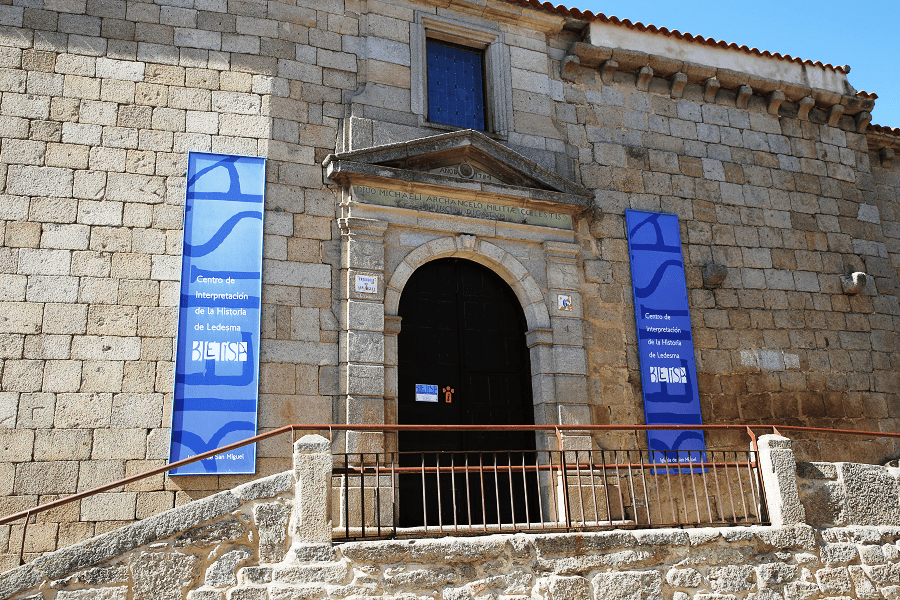 The castle: its trapezoidal construction started in the last third of the 12th century by order of Fernando II of León, it was profoundly reformed by Beltrán and Francisco de la Cueva, Counts of Ledesma, in the last third of the 15th century. Made of ashlar stone, it has two towers on the south portal, one frustoconical and the other polygonal, and the base of the keep to the north. The original coat of arms of the Villa, from the disappeared Puerta del Puente, stands on its eastern gate. 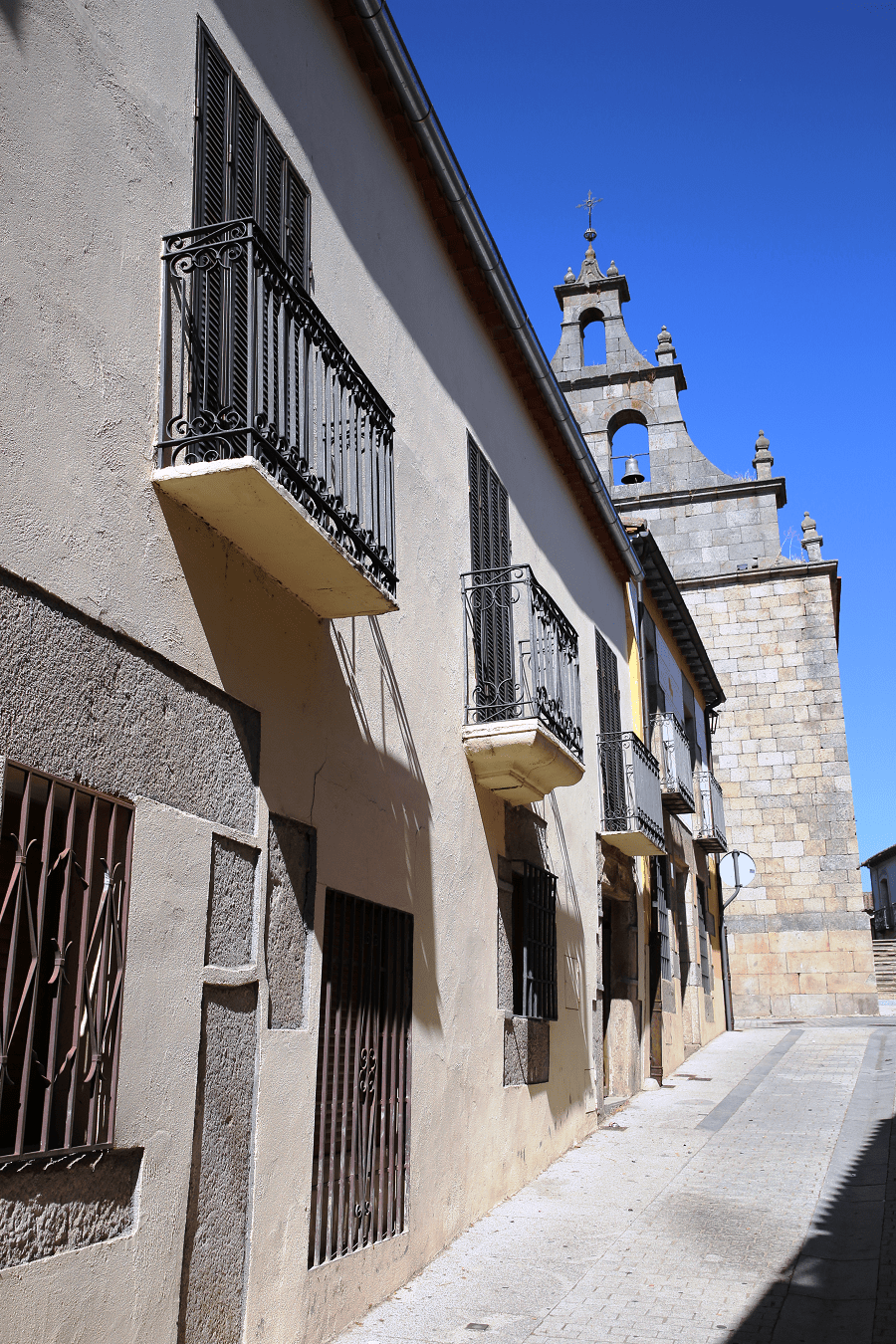 Inside there are two rooms from the Gothic period, one at ground level and the other above the previous one under the old keep. Archaeological excavations in the 80s and 90s uncovered a complex water channel system, as well as old buildings such as stables, forts, wells.

Santa María la Mayor Church: begun to build in the last third of the 12th century in the final Romanesque style, from that time today only the arch through which Calle de los Curas runs in the lower part of the tower remains. 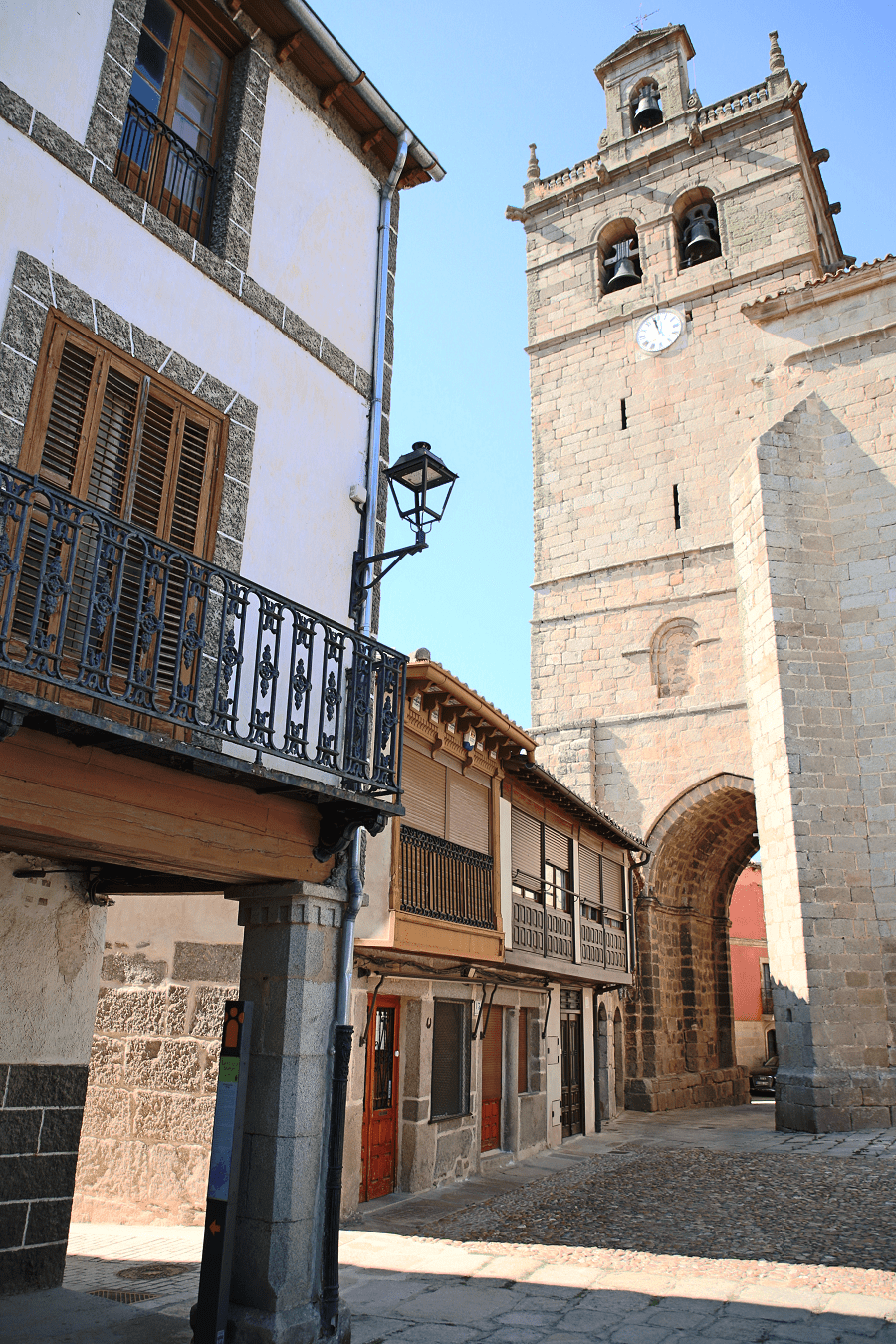 The great extension that is made between 1492 and 1500 is commissioned to Juan Gil de Hontañón el Viejo and consists of the construction of the entire nave of the church up to the triumphal arch that separates it from the Main Chapel and the middle body of the tower , decorated with the typical Elizabethan balls. 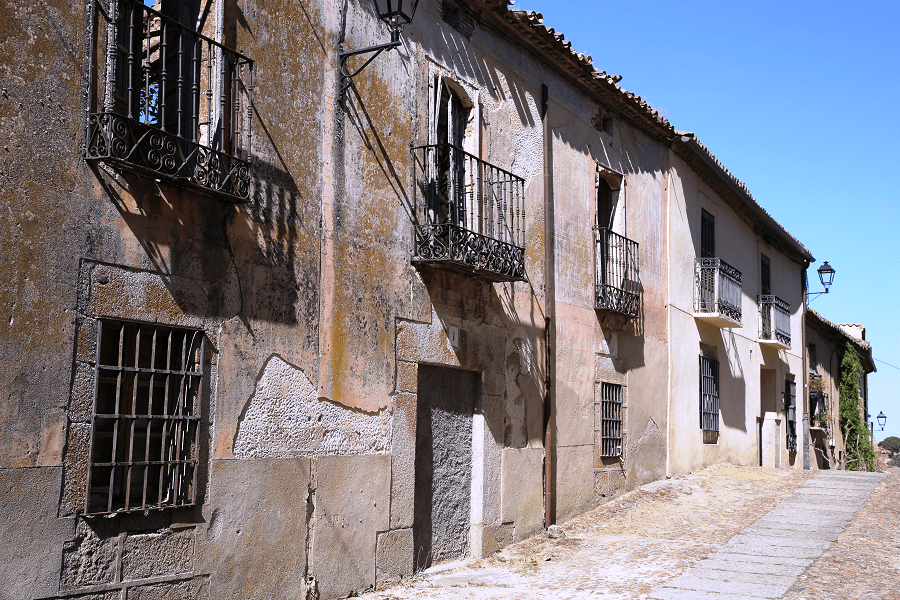 Walls: more than three kilometers of wall surround the entire perimeter of the city, but not all of it is from the same period. Its beginnings start in the Cerro de San Martín, the first populated nucleus of Ledesma (7th century BC), where there are already some strata of the pre-Roman wall. There are also some small parts that are believed to be Roman, especially on the Cuesta del Puente and around the old Puerta del Caracol and the Pozo de Nieve. 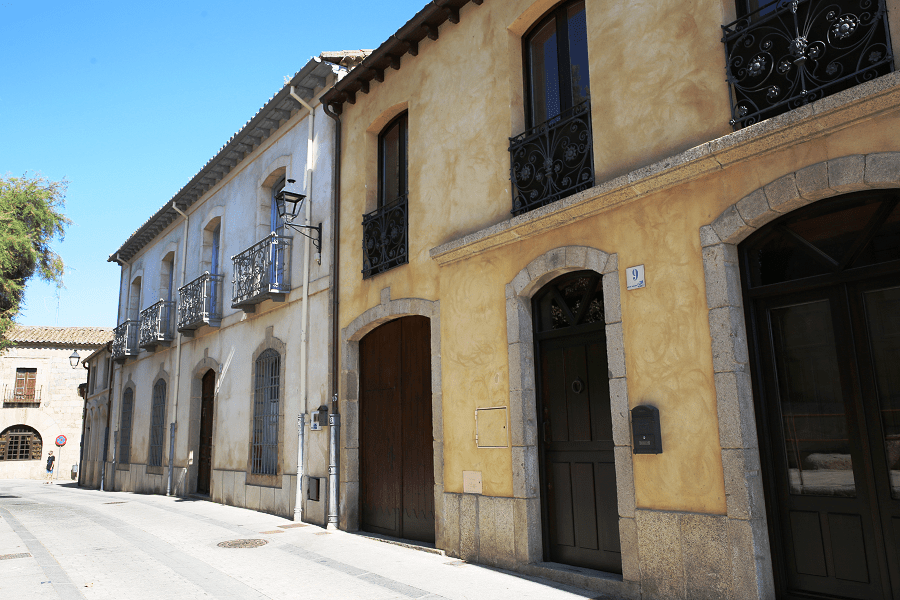 Gate of San Nicolás (BIC 1949): it is the only one of the eight gates of the wall that has been preserved. Built in the last third of the 12th century, of a construction made of ashlar, it is a set formed by two cylindrical cubes that surround the access door with two barrel arches on imposts. The legend says that, in 745, during the Muslim domination of Ledesma, the son of Galofre, the walí or chief of the city, ordered his son Ali (baptized as Nicolás) to be slaughtered and later stoned and burned together with the clergy Leonardo and Nicolás, for having converted to the Christian faith and thus betrayed Islamic law. And it was from the old door that stood in this very place that his father saw his son burn in the flames. 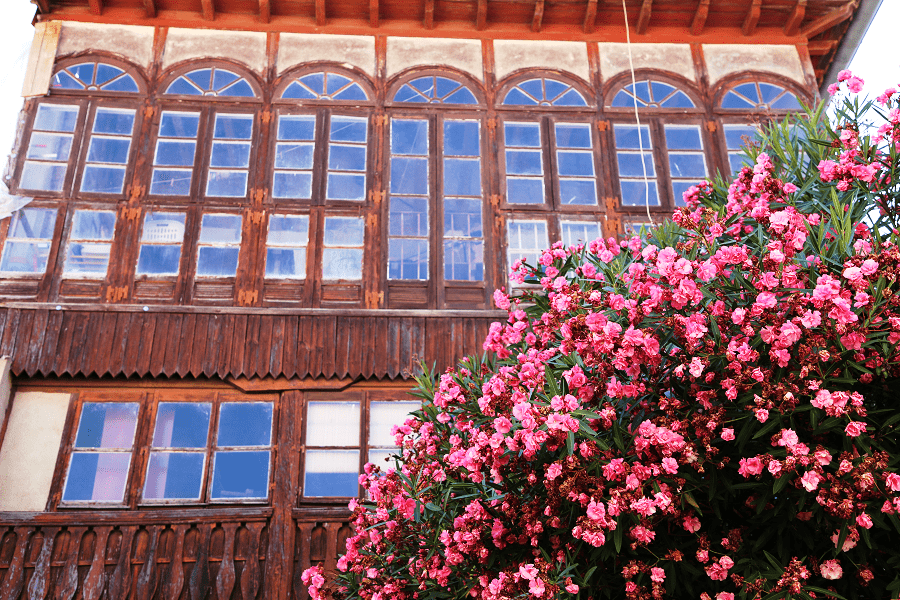 The Plaza de la Fortaleza: one of the hidden treasures of Ledesma lies in the intramural square that borders the castle: the so-called Plaza de la Fortaleza. It is a large landscaped esplanade that shelters under our feet a series of subways, vaulted chambers, conduits, powder magazines … that would constitute the cellars and the water pipes of the hypothetical palace that began to be built annex to the palace at the end of the 15th century.

City hall: the current Ledesma City Hall building was once built as the headquarters of the Casa del Corregidor, the Audience Room and the Royal Prison. It is a building begun in 1484, with a rectangular plan and constituted as a large solid building with an almost fortified appearance.

The plan of the building is preserved from that time, the lower entrances to it formed by two semicircular arches, what remains of the old prison and the beautiful interior patio formed by ten stylized columns with Gothic bases. 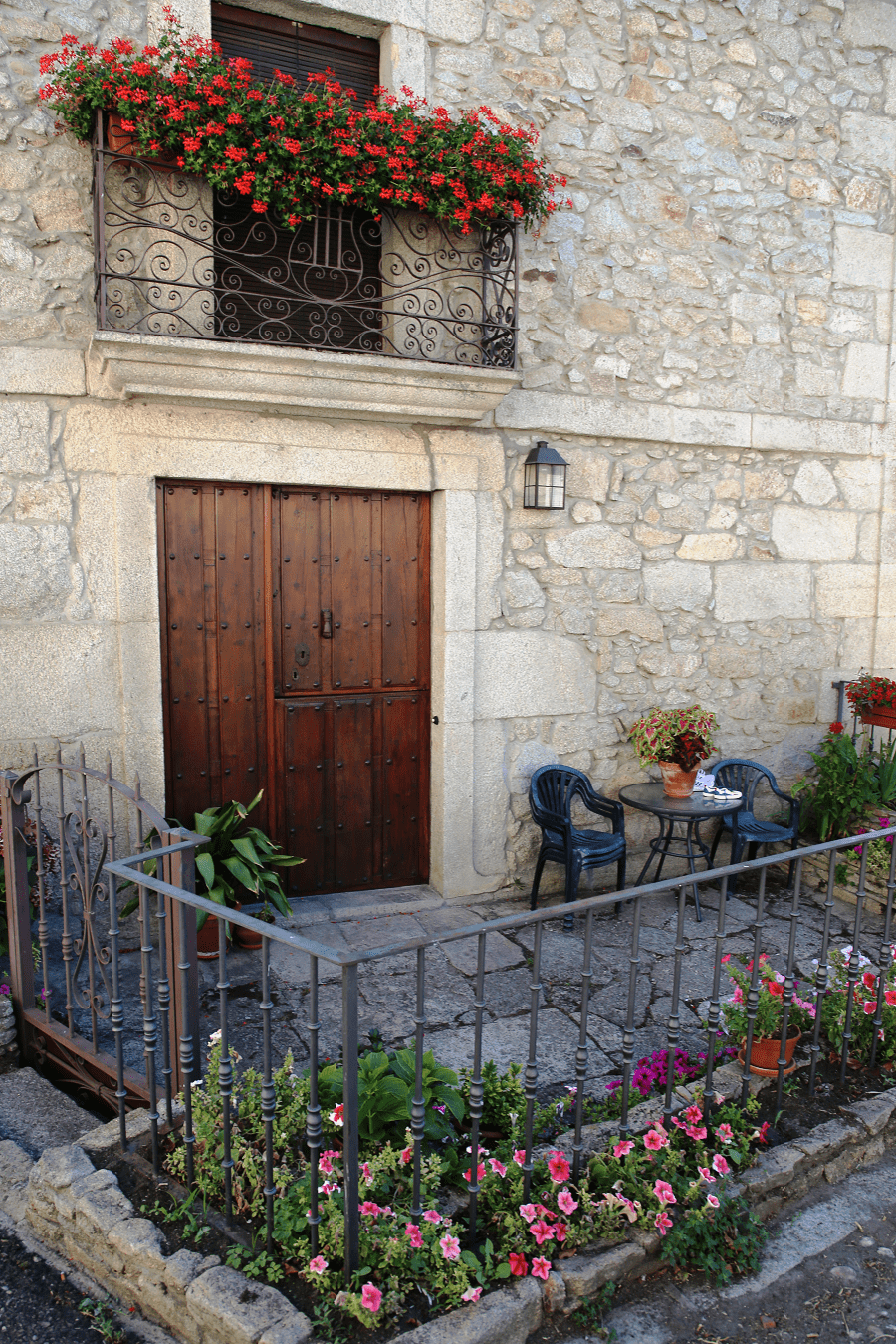 Old Bridge: its Romanesque base from the last years of the 12th century are the oldest remains that can be seen with the naked eye. It would be necessary to verify Father Morán’s data on the remains of Roman inscriptions at the base that testify to its disputed Roman origin. Until the 19th century it was the “highest bridge that crossed the Tormes”. 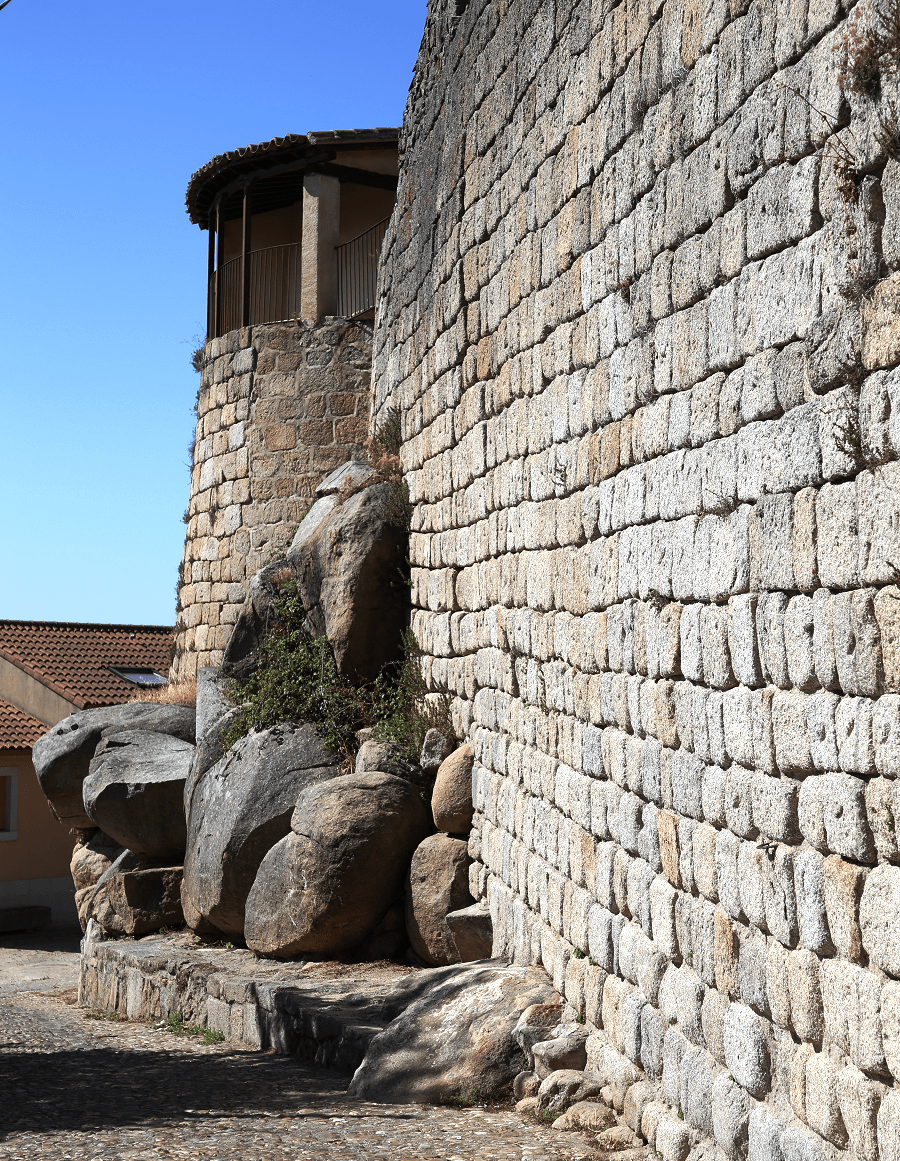 It is therefore a high-rise bridge whose current construction dates from the middle of the third third of the 15th century, possibly from the time of Beltrán de la Cueva. From that time only two pointed arches are preserved of the five that the construction has, since the two of the ends are the product of the reform of Martín de Sarasola at the end of the 16th century and the second arch leaving the city is the work of 1816, because in 1812 it was dynamited by Napoleonic troops.

The Mocho bridge: located three km north of Ledesma, on the Roman road that linked Ledesma with Zamora to save the Cañedo riverbank. It has five semicircular arches, the central one being larger, with four upstream cutwaters, staggered and triangular in shape. The bridge is made of granite masonry, except for the parapets, of masonry bonded with mortar. 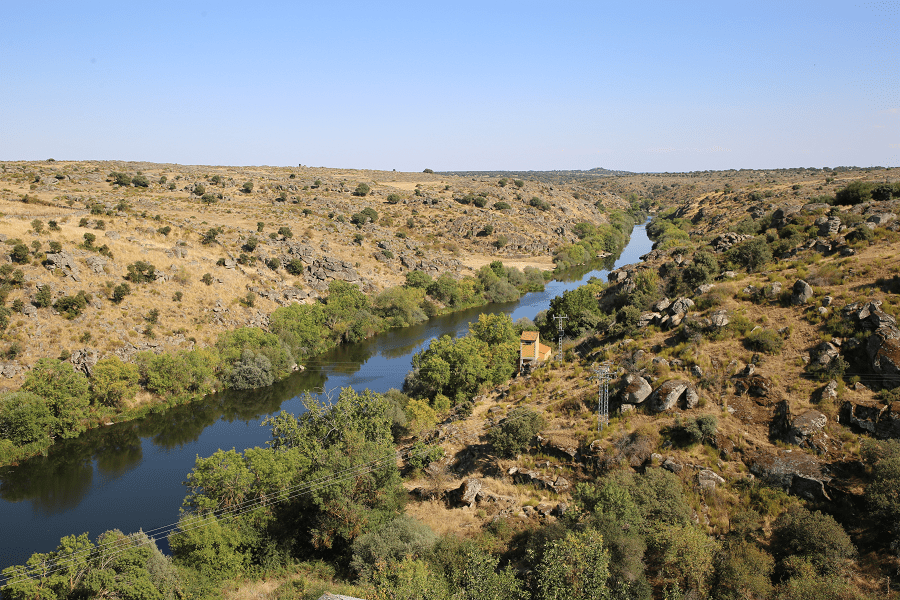 Beltrán de la Cueva Palace: historically, what is known as the Palace of D. Beltrán de la Cueva stands out, in the eastern part of the Plaza, only its façade formed by an entrance arch with large voussoirs and four upper balconies, over the door, is preserved. Under alfiz, there are the pitted shields in the First Republic of Francisco de la Cueva, II Duke of Alburquerque and Count of Ledesma, and of Francisca Álvarez de Toledo, daughter of the first Dukes of Alba. 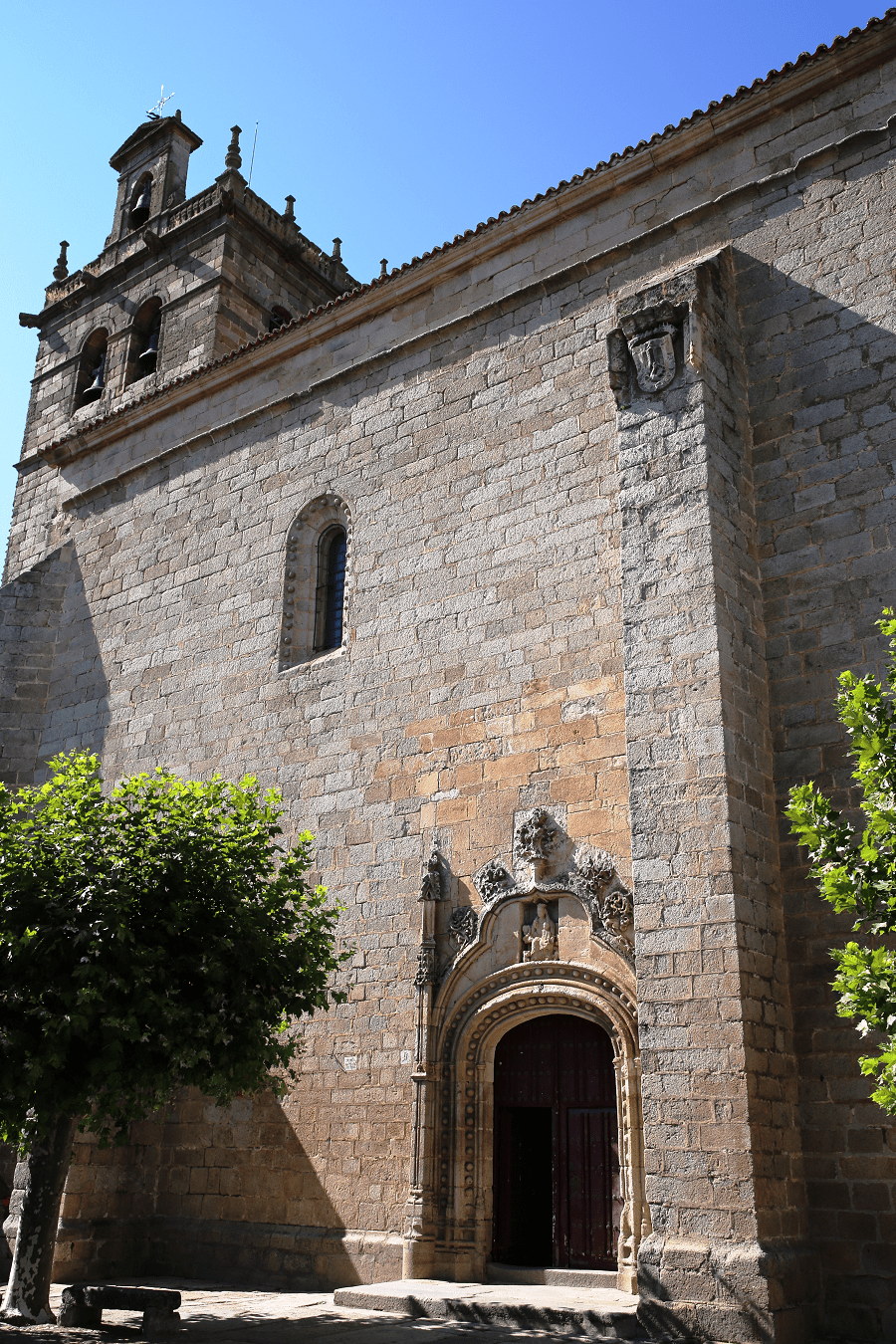 Alhóndiga: it is a large building founded by the Bishop of Útica, Pedro del Campo, a native of Ledesma, to help the poor in 1580. The current building, as the inscription on the lintel says, dates from 1605: “Being Duque de Alburquerque and Count of her Don Beltrán de la Cueba is in the mayor of this city Diego de Moreta Maldonado. 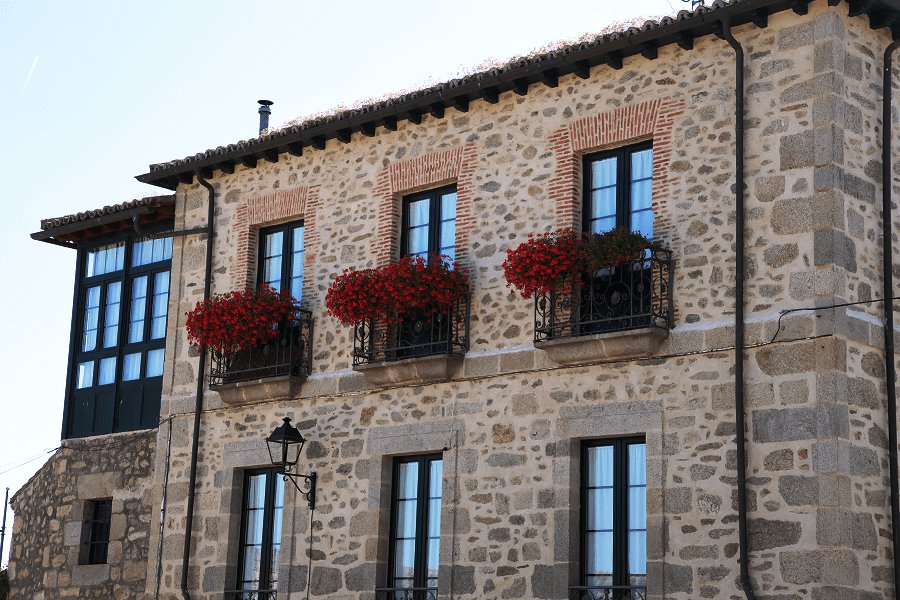 The local donuts are the star product of the gastronomy of Ledesma, whose fame has exceeded provincial and even regional limits.

Among the starters of its gastronomy, the stirred potatoes, the hornazo, the empanadas, the sausage and the maruja salads stand out.

As a main dish, the various meats stand out, coming from hunting or from the various livestock farms of the municipality, such as lamb, pork, partridge and rabbit. River products such as tasty tench also stand out. 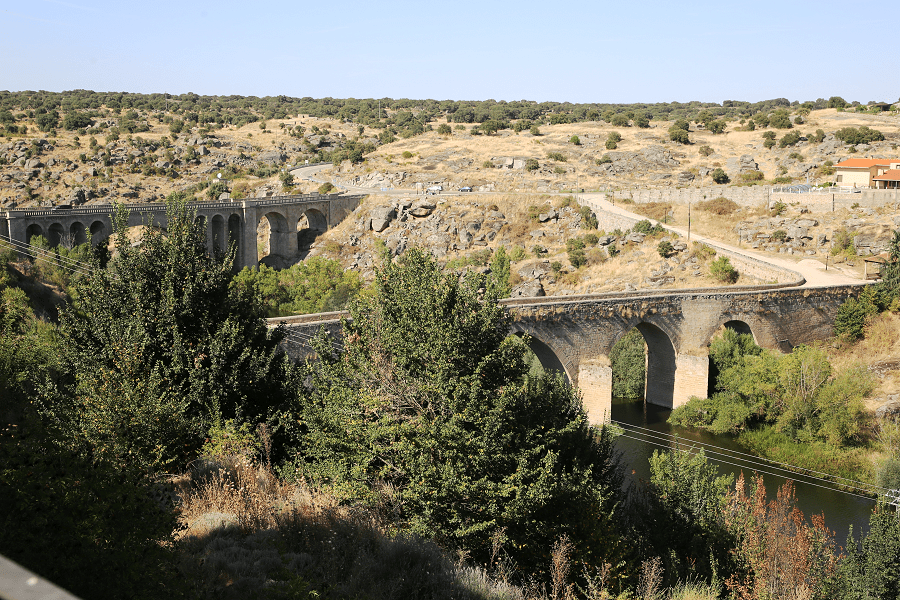