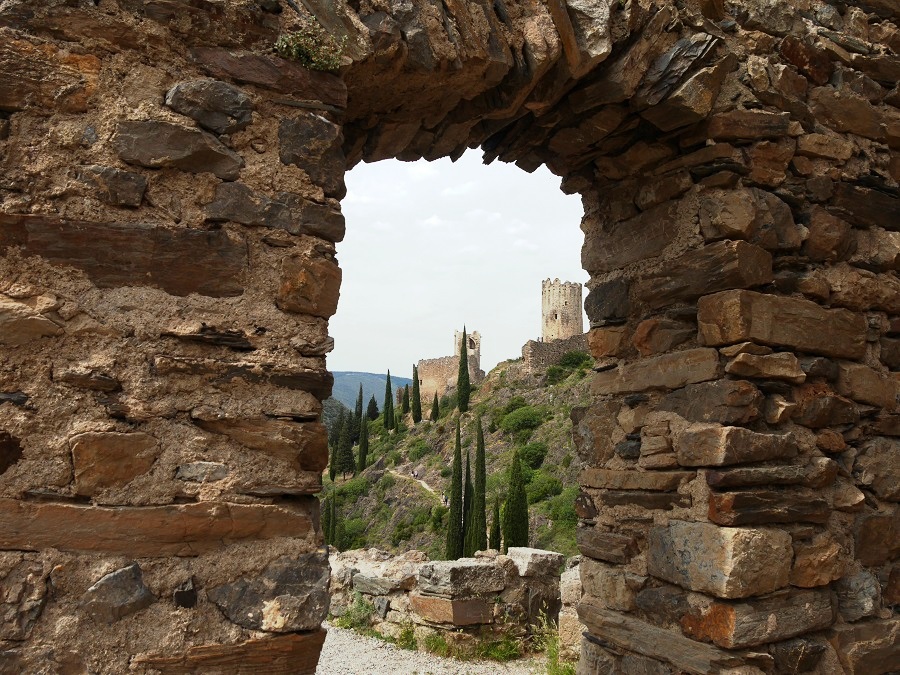 The castles are located in the French commune of Lastours in the Aude department, just a 20-minute drive from Carcassonne.

Each castle has its own name: Cabaret, Surdespine, and Regina Tower or Queen Tower (Tour Régine), all of which are close to each other, whilst Quertinheux is on a separate hilltop nearby.

There are ruins of the small, one-nave, St. Peter’s church made in the Romanesque style, presumably dating back to the 11th century, below Quertinheux.

All four castles constitute a single entity, although they are not a single structure. Their main architectural feature is that they are “embedded” in the rocks.

Cabaret Castle is located to the north of the complex and is the largest of the four castles. It consists of three parts: a polygonal dungeon (an architectural term meaning “the main tower of the castle”), a main block, and a curtain (an architectural term meaning “wall connecting two towers”, the main and secondary). A narrow spiral staircase leads to the main tower, from the top of which you can come across one of the most beautiful views of the other three castles.

Regina Tower is round with a spiral staircase leading to the top.

Quertinheux Castle is a complex structure, an “architectural synthesis” of Cabaret Castle and Regina Tower.

Surdespine is a castle with a dominant square tower, the stone of which has a pinkish color.

There is the medieval village of Cabaret at the foot of the castles where archaeologists discovered the remains of a town and houses with stables, forges, workshops, and cobbled streets. The main period of archaeological excavations was from 1992-1998. The archaeologist Maria Elise Gardel guided the work. This is a special place, which appeared literally from nowhere, where it is pleasant to wander around, plunging into the world of the past. 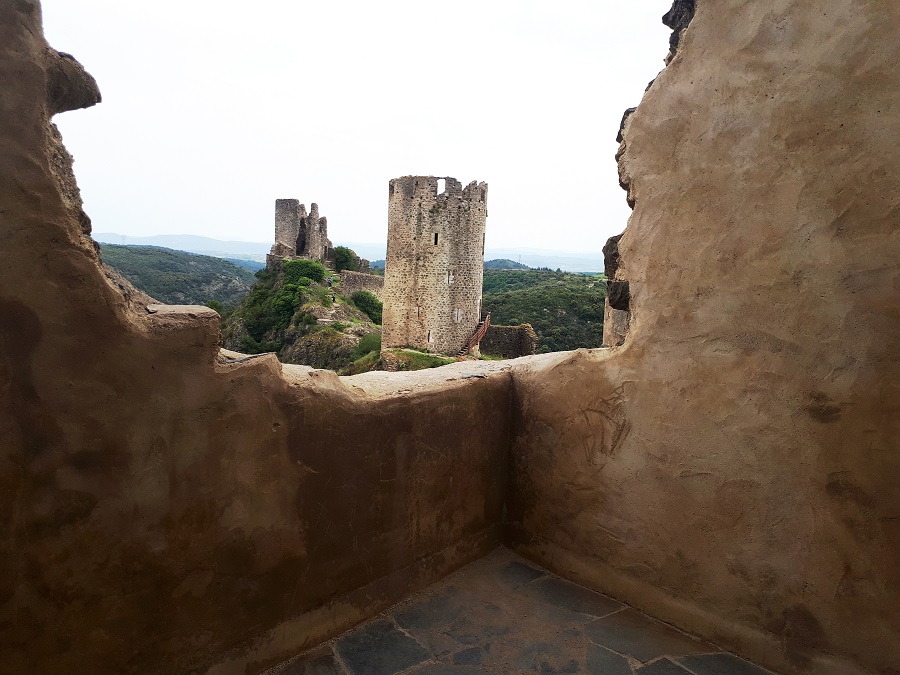 One can access the castles through the main entrance, where there is an exhibition about the archaeological sites as well as a souvenir shop. A Michelin-starred restaurant and free parking are near the entrance.

Belvedere is an ideal place for those who do not have time or the desire to “storm” the castles. It has an observation deck with panoramic views of the entire complex (the place is also wheelchair accessible).

The first mention of the present “Lastours Castles” dates back to 585 when its name was “Caput Arietis Castra”. The land was in the possession of a Cabaret Lord’s family in 1063 whose wealth came mainly from the development of iron mines.

Lastours was a hotbed of Catharism, there is evidence that the Cabaret Lords were zealous followers of this religion.

The fortress belonged to Pierre-Roger during the Albigensian Crusade. The castles resisted the attacks of Simon de Monfort, the fifth Earl of Leicester, in 1209, and Humbert de Beaujeu’s attacks in 1227. The fortress surrendered in 1229 and they destroyed it along with the medieval village.

The King of France, Saint-Louis (Saint-Louis) confirmed his power and potency: as a result, four stone fortresses appeared on a rocky ridge. He built the Queen’s Tower by the order of the king separately to confirm his superiority.

These royal castles have been fully adapted to new means of attack. A small royal garrison occupied each tower.

The “Lastours” name appeared after the revolution when the castles were abandoned.

The French Ministry of Culture declared the location to be a cultural heritage site in 1905.

Children up to 6 years old – free of charge