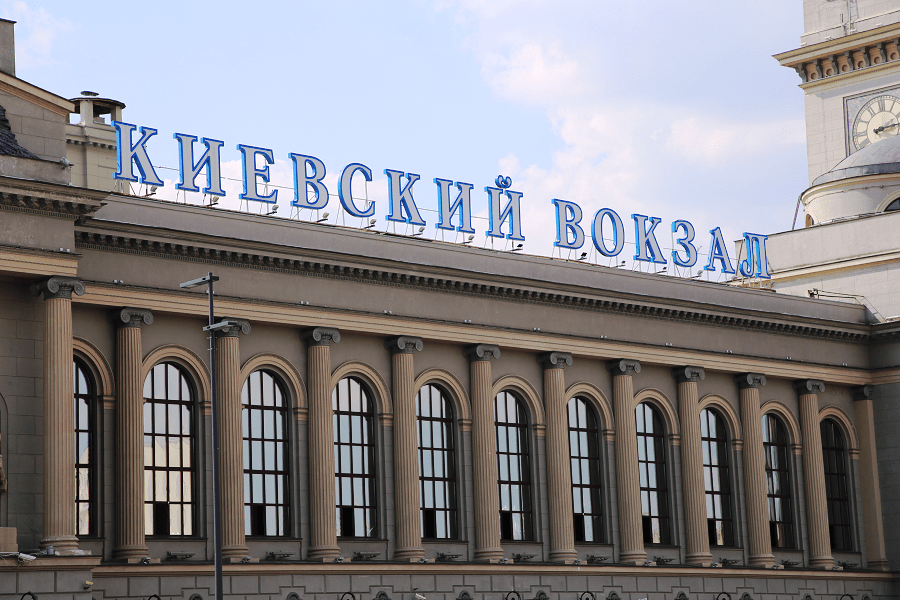 Kievsky railway station (in 1899-1934 – Bryansky) – the passenger terminal of the Moscow-Passenger-Kyiv station, one of the ten railway stations in Moscow. Located on the area of ​​the Kyiv Metro Station. Monument of architecture and engineering. An object of cultural heritage of the peoples of Russia of federal significance. 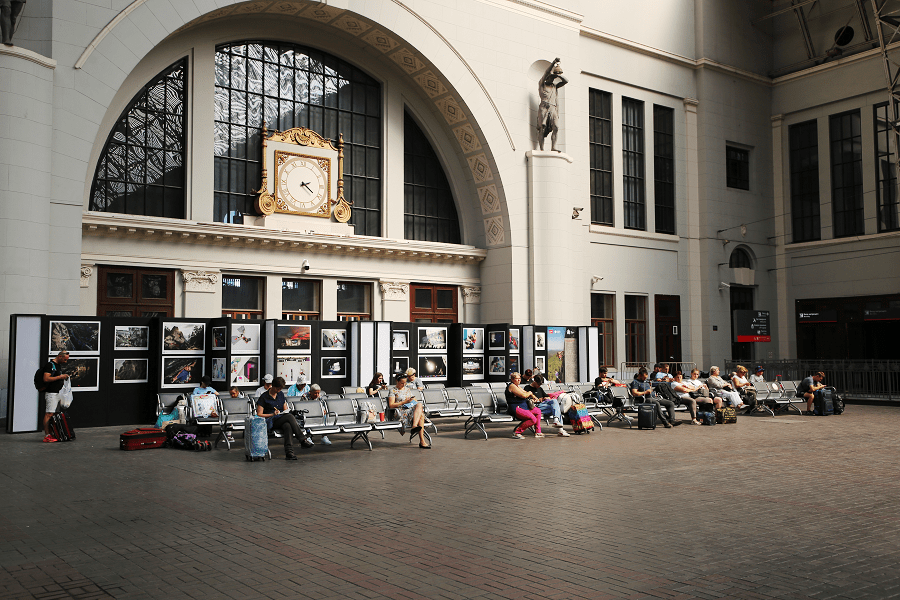 According to the main application, it is passenger, in terms of the amount of work, it is extracurricular. It is a dead-end station and the starting point of the Kyiv direction of the Moscow Railway, as part of the Moscow-Kyiv highway. 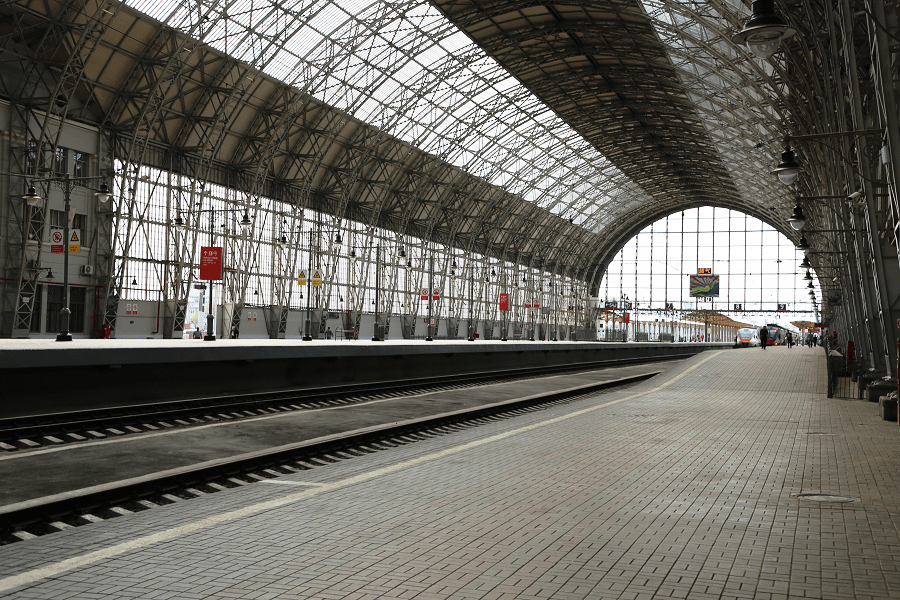 The decision to build a modern building of the Kyiv station was made in 1912, in the year of the centenary of the Battle of Borodino. Given the location of the station at the beginning of the road from Moscow to Borodino, and to unload traffic at the request of the city authorities, the Borodinsky Bridge was first built with the money of the station’s investors (architect Roman Klein). 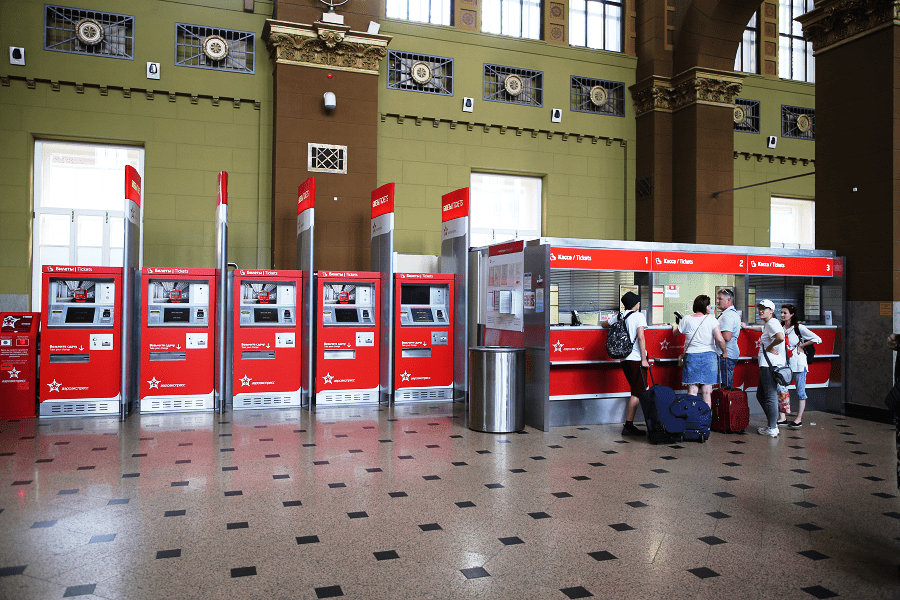 The station with a landing stage was built in 1914-1918 on the site of an old building designed in 1899. S. Alyoshin, murals of the halls – artists F. Rerberg and I. Nivinsky. The laying of the first stone took place in May 1914. Despite the fact that the main stage of construction was completed by 1918, some work continued until the 1920s.

In the architectural concept of the station, in the paintings of the halls and sculptures, the connection with the Patriotic War of 1812 is monumentally emphasized. The station was built in the neoclassical style with Empire elements. The total area of ​​the Kievsky railway station is over 36,000 m². The passenger traffic of the Kievsky railway station is more than 400 people per hour. 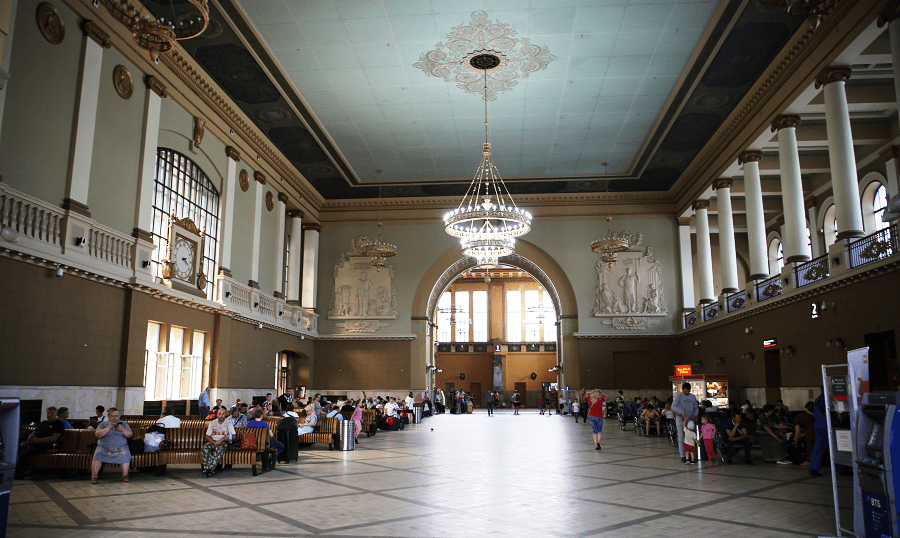 A landing stage adjoins the station building: the space above the platforms is covered by a huge single-vaulted glazed arched covering (length – 321 m, span width – 47.9 m, height – 28 m, weight of structures – more than 1250 tons), having the shape of a parabola. Steel high three-hinged arched trusses demonstrate the grace of a majestic structure. 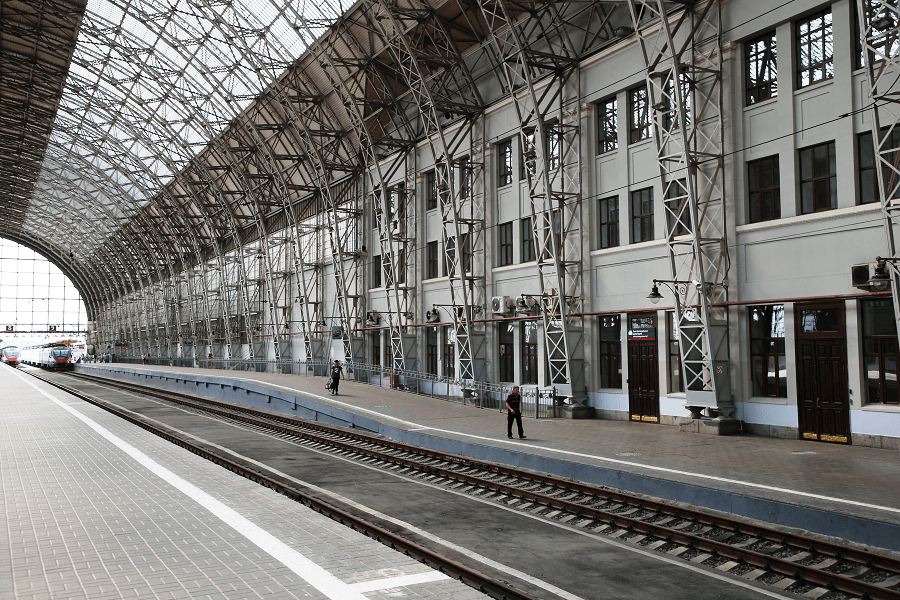 Passenger trains to Anapa and Adler run via Kaluga I, Tula, Oryol, Kursk or via Efremov, Yelets, Pridacha and further to Rostov-on-Don.

The fast train “Strizh” to St. Petersburg follows through Bologoye and arrives at the Moscow railway station.

Trains to Bryansk, Klimov and Novozybkov, plying along the main (Kyiv) course, follow through the stations of Kaluga II and Sukhinichi-Glavnye. Trains to Yeysk run from Moscow via Kaluga I, Tula-Vyazemskaya, Uzlovaya I, Yelets, Rossosh.

In recent years, passenger trains and direct carriages to Ukrainian cities have been canceled until further notice. International trains to Budapest, Bucharest, Sofia, Prague and Bratislava were canceled in the 2000s or transferred to the Belarusian direction. 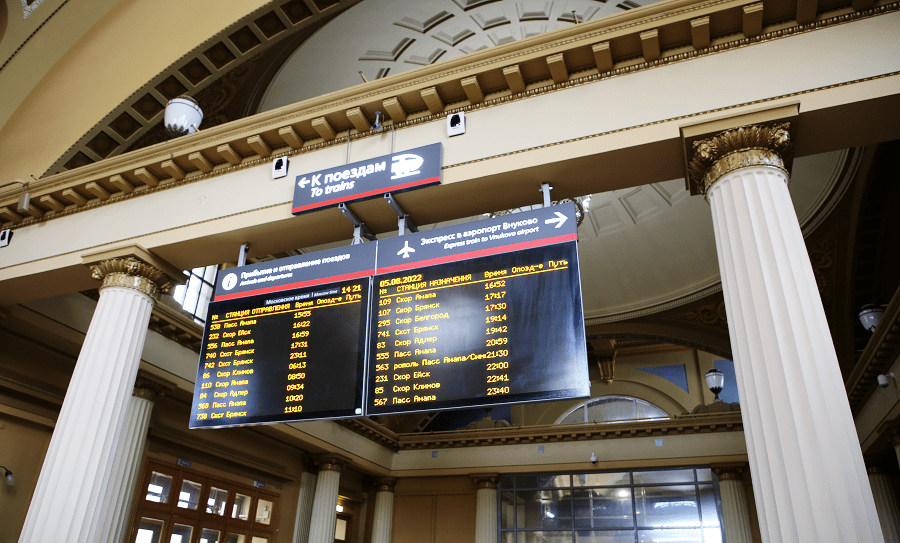 Cruise train “Pearl of the Caucasus”

From April to October, the tourist train of the Russian Railways “Pearl of the Caucasus” runs regularly with the direction of: Moscow – Maykop – Nalchik – Grozny – Makhachkala – Derbent – Kislovodsk – Moscow. 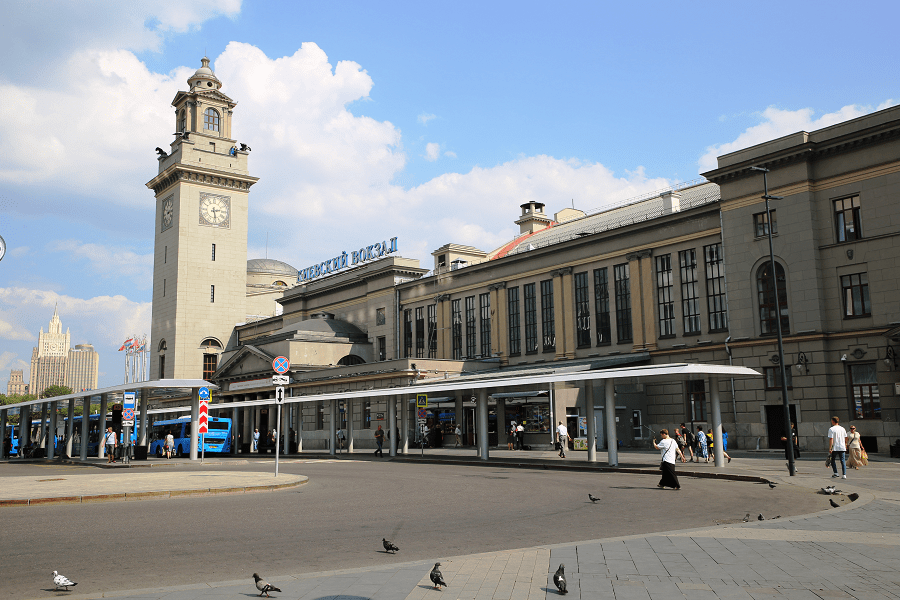 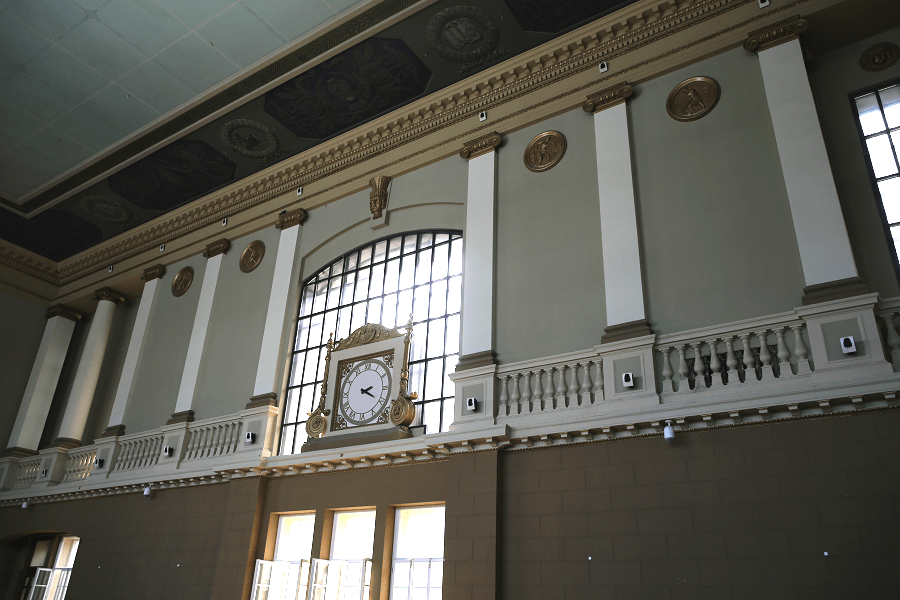 The entrance to the manual storage room is in the center of the main facade. Here you can leave things at a price of 100 rubles per day. Oversized baggage can be checked in for 140 rubles per day, but the following days are estimated at 180 rubles.

In the main hall of the station there is an automatic left-luggage office. Provides cells in four different sizes from small to large. The first hour of storage costs from 100 to 200 rubles, the next hours – from 50 to 100 rubles. It turns out 220 – 500 rubles per day. For bulky luggage, you should pay 230 rubles per day, and the next day the tariff remains the same. 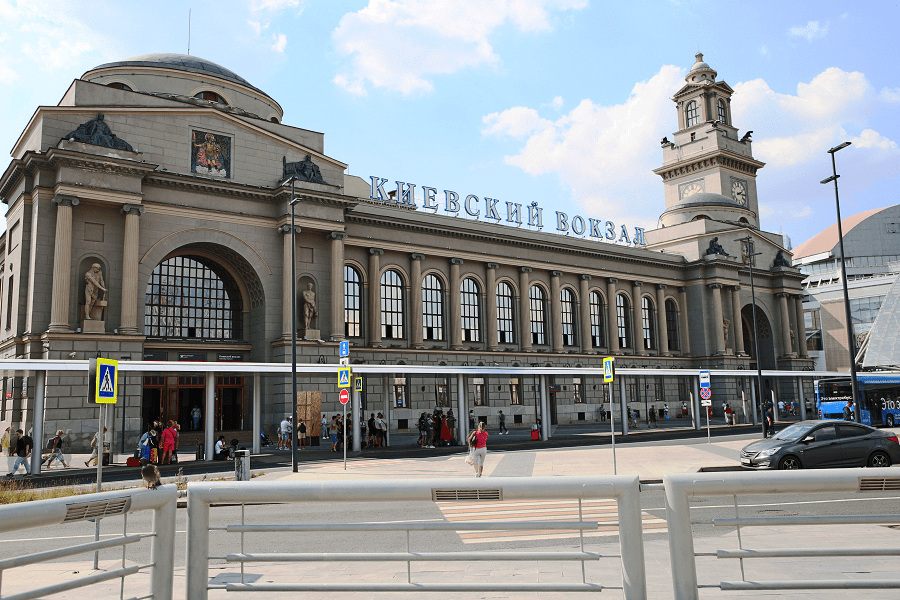 In the Aeroexpress hall there is a third option – another automatic luggage room. Tariff – 30 rubles per hour.

From the commuter train arrival hall and the underpass of the passenger terminal, you can get to three stations of the Moscow metro “Kyiv” – Arbatsko-Pokrovskaya, Koltsevaya and Filevskaya lines.

At this station, you can transfer to the following routes of urban passenger transport: 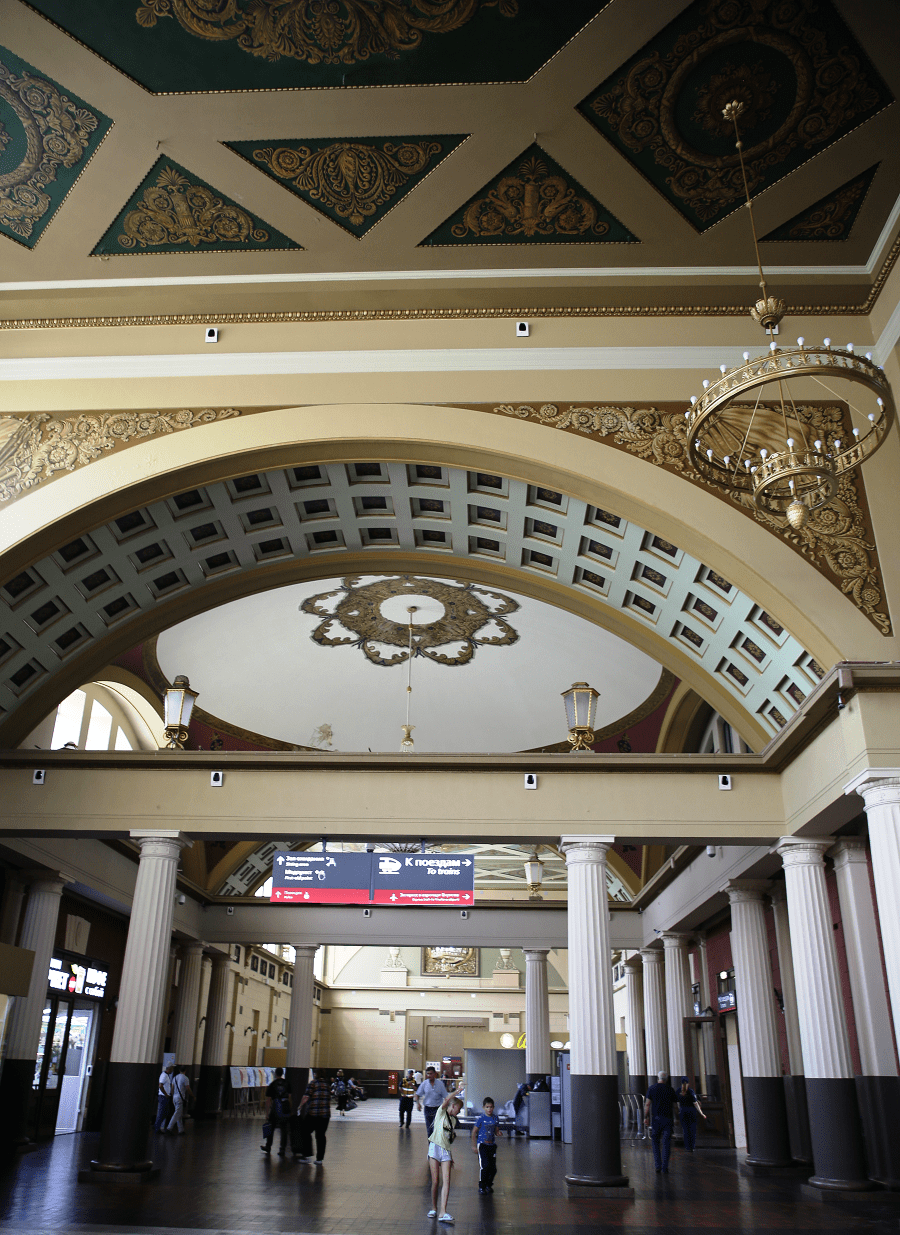 300 meters from the main entrance to the station on Berezhkovskaya embankment, behind the Europe Square and between the Bogdan Khmelnitsky and Borodinsky bridges, on the Moskva River, there is one of the oldest river piers in the capital – Kyiv Station. 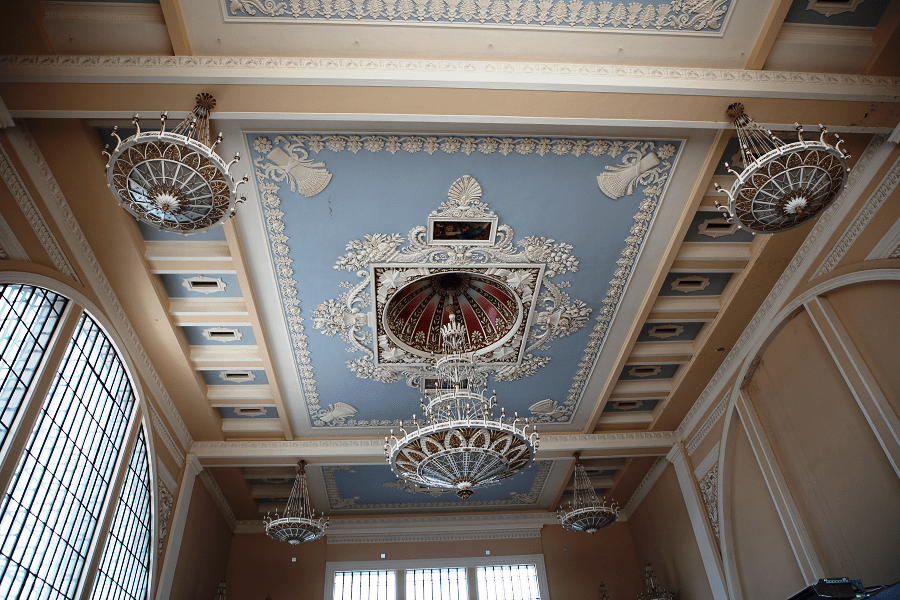 In navigation in 2022, you can transfer from the pier to cruise ships that carry out sightseeing tours. In the summer of 2021, the repair of the berth was completed, the wooden flooring on it was replaced with a wood-polymer composite, the adjacent territory was cleaned and equipped.