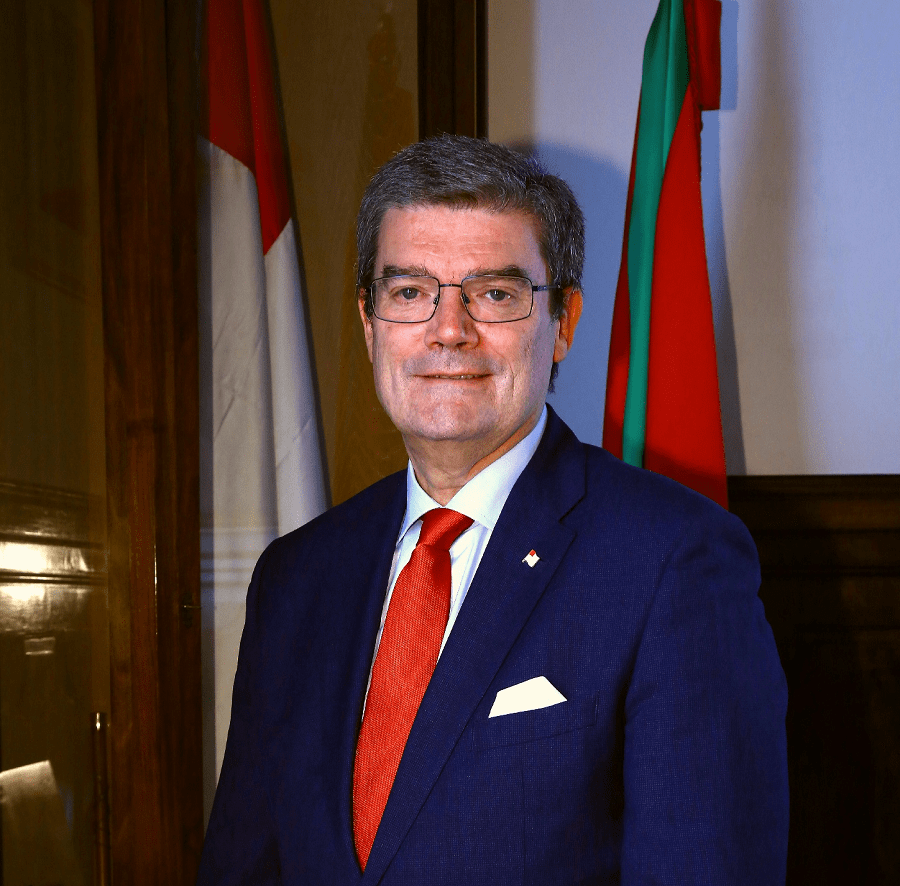 Juan María Aburto Rike (born 28 March 1961) is a Spanish politician of the Basque Nationalist Party. He was elected mayor of Bilbao in 2015.

Born in Bilbao, Aburto graduated in Law from the University of Deusto in 1984, and became a civil servant for the Provincial Deputation of Biscay in 1986. In the early 1990s, he worked in the Basque Government under Interior Minister Juan María Atutxa.

Returning to provincial politics, he was a deputy to provincial leader José Luis Bilbao from 2011 to 2012. In December that year he went back to the regional government, to be Minister of Employment and Social Policy.

In October 2014, he was chosen as the PNV candidate for Bilbao’s mayoral election in 2015. He resigned from his ministry in February. His party won 13 out of 29 seats and achieved a majority by forming a coalition with the Socialist Party (PSE-EE).

Aburto won re-election in June 2019, forming the same coalition with 14 and 5 seats respectively and delegating four specific areas to the PSE.

We spoke to Mr. Juan María Aburto Rike about plans for the future of Bilbao.

It would be interesting to know the history of the city’s name, so why Bilbao?

Bilbao was a port before it was a town. In fact, it was a suburb of the porch of Begoña that was growing around the white rock of Atxuri, next to the circular meander in which the river becomes an estuary and begins its mouth to the sea. In the Basque language, circular is sice biribil and bocana aho, so it is likely that the name Bilbao, of uncertain etymology like many other ancient Basque names, refers to the location of the town in which Don Diego founded the villa in the year 1300.

What important cultural and business events are taking place in the city this year?

As we expected, the return to pre-coronavirus conditions is arousing activity in the city. Without a doubt, Bilbao’s quintessential event is Aste Nagusia, our Big Week, which turns our city into the European capital of public entertainment every August, with a thousand free activities for all audiences and all ages. Nor can we forget Bilbao BBK Live, a reference festival in the world, or our Zinebi and Fant film festivals.

Bilbao is also the permanent venue for the BBVA Foundation’s Frontiers of Knowledge Awards, considered the prelude to the Nobel Prizes, and among the major events scheduled for this year are the First World Summit on Well-being for Social Change and the Seventh World Congress on the International Society for Economics and Business Ethics, among others, in addition to the arrival of La Vuelta and the preparations for the departure from Bilbao of the Tour de France in 2023, and of course, the 25th anniversary of the Guggenheim Museum Bilbao.

What would you recommend visiting first for tourists who come to Bilbao?

I would recommend strolling through the medieval streets of the Old Town and the Ensanche avenues, which are full of commercial activity, visiting Ría to witness more than seven centuries of history in our city, and seeing the modern architectural landmarks of Abandoibarra, the Guggenheim Museum and the Euskalduna Palace. I would also invite you to take the funicular up to Mount Artxanda, from where you will enjoy the best views of the city.

Gastronomic tourism in Spain: what can Bilbao offer tourists?

Long before the tourist boom in Bilbao due to the so-called “Guggenheim effect,” our city was known inside and outside our borders for its extensive gastronomic offer. Currently, Bilbao combines the best of the current gastronomic avant-garde with the usual establishments, specializes in traditional home cooking and offers competitive prices.

What is the dynamic of tourism in the city, including international tourists?

Before the pandemic, Bilbao was about to break the record of one million visitors per year, and we are convinced that very soon we will be able to break that record, which would confirm the consolidation of our tourist offerings that feature the immense historical, natural and landscape legacy of Bizkaia and the Basque Country, from the extensive estates of Rioja Alavesa to the beaches and marine environment of our coasts.

What can you say about Bilbao’s economy? What are the largest business units in the city?

Innovation has always been part of Bilbao’s DNA. With the collapse of the industrial city model that we knew in our youth, Bilbao had to reinvent itself for the umpteenth time in its history, and it did so by specializing in those activities that had to be built from nothing, such as cleaning the estuary or the development of advanced urban solutions, promoting the creation of a new development model that cares for and maintains the solid industrial base of our economic fabric, while betting on clean industries, new technologies, cutting-edge research, the alignment of academic activity with the productive needs and the development of new productive niches for the future linked to the attraction and retention of talent and the creation of opportunities for youth.

What are the investment plans and budget-2022 of the city? Do they plan to make improvements to transportation infrastructure, for example?

At this moment we are executing a budget of 633 million euros, the largest budget in the history of the Bilbao City Council. More than a third of this budget is allocated to projects, works and interventions that are intended to improve the quality of the urban environment and city services, promote economic reactivation, create more employment opportunities and enhance the well-being of citizens. We will also allocate 42 million euros to care for the most vulnerable groups, people whom the coronavirus has affected and those from the Economic Development Area. Furthermore, we will invest 28 million euros this year to continue promoting entrepreneurship, local commerce and employment.

Does Bilbao have any strategic plan to attract foreign investors? In what areas? What are the biggest projects for the future of the city?

According to the Financial Times publishing group, for some years now, Bilbao has repeatedly appeared in the rankings of the most attractive cities for foreign investment. Undoubtedly, this has a lot to do with the structure of our productive fabric, role in leading the research and innovation ecosystem in Europe, strategic location and administrative and financial framework that supports entrepreneurship. Bilbao City Council has an office that specializes in advising on attracting foreign investment, called Invest in Bilbao, which launched Bilbao Business Explorer at the end of 2021, a cutting-edge tool developed by GIS Planning, a world leader in online development solutions which helps foreign companies and investment agents to make decisions in an agile and quick way, with special attention to the island of Zorrotzaurre, the city’s new focus of investment, and to three strategic areas: Advanced Services for Industry, Cultural and Creative Industries and the Digital Economy.

Is Bilbao a popular city for immigration?

Bilbao is, from its origins, a city of floodwaters, which has gradually shaped its open, supportive and tolerant character with the contributions of entire generations of people from the most diverse backgrounds. And our objective, within the Bilbao, balioen hiria (Bilbao, city of values) strategy is to continue using inclusion, social justice and interculturality as axes of future development of our society, with the aim that all people who settle in Bilbao, whatever their origin, social status or academic level, can conduct worthy and full life projects.

How has the standard of living changed over the last year? What is the rate of inflation? How much have the prices of housing, shopping and gasoline increased?

Unfortunately, when we harbored the hope of being able to overcome once and for all the nightmare of COVID-19, which has caused so many deaths and so much havoc in hotels, restaurants, small businesses, tourism, cultural and creative industries, and the employment of thousands of people from Bilbao, the drums of war are beating again in the heart of Europe, leading us to a state of uncertainty that obscures all initial forecasts. In this sense, I want to remind you that, during the pandemic, thanks to the unanimous agreement reached by all the parties with municipal representation, the Bilbao City Council has thrown in the rest so that the city continues to move forward. And despite all the difficulties, I believe that we have more than enough reasons to continue being optimistic and participating in this great project of tolerance and coexistence called Bilbao. We are certain that the City Council will continue to do everything that is in its power so that no one is neglected.

What about the nightlife in the city? Do you organize any music festivals? What cultural and sporting events are planned for this summer?

In Bilbao, we can boast of having one of the most extensive and attractive cultural and leisure offers in Europe, comparable to the cultural and leisure offers of other cities larger than ours. The municipal strategy “365 Kultura” is committed to ensuring that Bilbao has a wide and attractive offer for all audiences every day of the year. And among the major events of this year are the Bilbao BBK Live festival stands out, which has once again broken attendance records after the pandemic, the Aste Nagusia that will turn Bilbao into a hive of recreational and cultural activities at the end of August and, as a novelty for this year, the first edition of the Bilbao Blues Festival.

What is missing from Bilbao’s image? What project would you like to achieve as mayor of the city?

At this time, Bilbao is developing the Zorrotzaurre project, the island of opportunities for youth, which will have two innovation parks intended for non-polluting digital activities linked to biotechnology, advanced technology, creative industries or advanced services for the industry. And, of course, we cannot forget the High-Speed Train, whose underground arrival in the city center cannot be reversed, thanks to the protocol signed between the Basque administrations and the State last February, which will improve the excellent connectivity International Bilbao and will allow the city to unite even more, with a new area of opportunity to continue advancing steadily in the consolidation of the Bilbao model of sustainable urban and human development, internationally recognized with awards such as the Lee Kuan Yew World Cities Prize, considered the Nobel Prize for world urbanism.

What are your hobbies (books, movies, sports)?

The Mayor of Bilbao is mayor 24 hours a day, so the little free time I have I take advantage of, above all, to be with my family, play sports and read a little, although we always take time out to enjoy a good movie or some of the many shows that are scheduled both at the Arriaga Theater, the Euskalduna Palace and the Campos Theater as well as in the rest of the city’s scenic production centers.