Jimi Tenor: Always up for experiments • ALL ANDORRA 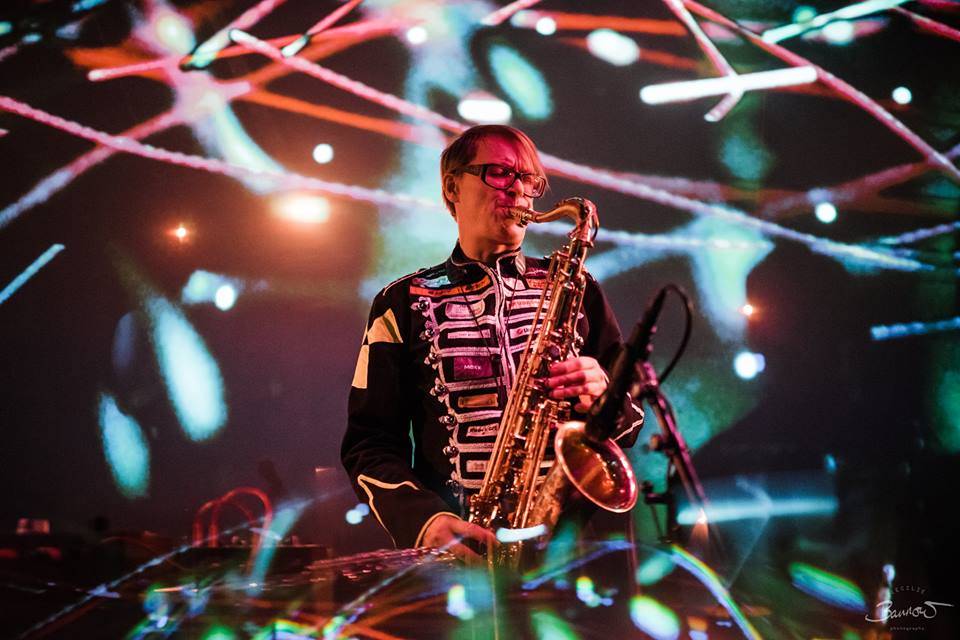 Jimi Tenor talks about the spirit of loneliness in his music, his experiments in brewing beer, the development of his musical taste, his last album and possible comeback to dance music

Jimi Tenor is a remarkable artist with a wide and rich musical background who is always ready for unexpected twists and taking new directions in music. He managed to cover so many genres and has done so many collaborations, yet still manages to create something new in his unique approach to creating sound and his artistical image – being famous for the funky outfits that he designs himself.

He started his path in music during his youth at the end of the 80’s as a frontman of the punk-industrial band, Jimy Tenor And His Shamans. Then in the 90’s there was a period of romance with electronic music when he was released on one of the most forward-thinking labels, Warp, and for a short period became a pop star with his big hit, “Take Me Baby”, that shook the dancefloors all over the world and had a great ironic video that was on all the main music channels. But boarder of styles were always narrow for artists like Jimi Tenor and he went further in his musical evolution, starting to do his own eccentric interpretations of jazz, funk and soul, sometimes moving to afrobeat or making a comeback to dance music.

He could be seen in a small night club doing a one-man show, which thanks to his excellent multi-instrumental skills and a big bunch of recognizable and loved by the audience songs, is always an unforgettable experience. Also, he played with big band setups, that changed from album to album, as well as at music festivals and big concert halls. His true passion for music gives him the ability to have an open view on things and to be ready for experiments.

Jimi Tenor found time to talk with All Andorra in the middle of his tour for his new album about his latest projects, the spirit of loneliness in his music, his beer brewing experiments, favorite collaborations and many other interesting things.

Hi Jimi! What are you up to now? This year you had a great album, are you mostly touring with it at the moment, or planning to make some new music?

I’m on tour right now. I’m in Austria at the moment and tomorrow we have a show in Italy. My last album, “Order Of Nothingness”, was released in June 2018. We worked for a long time on it in Philophon studio in Berlin. Mostly I worked on it with two guys – Ekow Alabi Savage who is my longtime musical partner – we have been working together for around 10 years, and Max Weissenfeldt with whom we have been creating stuff together for the last couple of years.

My last album “Order Of Nothingness” was released in June 2018

As I understand it’s a jazz and funk album with a big band involved for live performances. You are known as an artist who does shows with very different setups – big bands and one man solo shows. What kind of performances do you enjoy more?

Big shows are the best. I like to be on stage with a large band with a lot of horns. But on the other hand, the good thing about a solo show is that I’m on my own and don’t have to ask anybody to do anything. Also, big band shows always take a lot of organising. So, it’s a good thing to have the possibility to do all kinds of gigs, it keeps the balance for me.

Probably my favorite one was with Tony Allen, who is a famous afrobeat drummer. The only thing was that sometimes it was hard to keep up with him as we had different lifestyles. Tony is a kind of a hardcore guy who wakes up late and likes to party and I’m much calmer about these kinds of things.

Probably my favorite collaboration was with Tony Allen

You have also created a lot of music in different genres, starting from your youth when you sang in the industrial-punk band, Jimy Tenor And His Shamans, then you moved to electronic dance music and for the last couple of decades, you have mostly done funk, jazz and afrobeat stuff. This looks like a wide range of styles. How did your musical taste develop over the years and what helped you to cover such a big variety of music?

Well, during different periods of your life you have different levels of energy and knowledge and my taste in music developed according to them. For example, in my teenage years, I didn’t listen to jazz at all and I started to explore this genre when I was around 27. Even then, I never listened to mainstream jazz like bebop and was always up for something more unusual, like Sun Ra Arkestra. I think each type of music is good for a particular situation. At home, I like to listen to peaceful things like spiritual jazz, but if you are in a night club you, of course, need something more energetic. And I use this approach in my live shows, when I play in clubs I adjust my music for the party vibe. I always try to make good music that works for that moment.

And besides listening to spiritual jazz, what do you like to do when you are not touring? What kind of lifestyle do you have at the moment?

I’ve been to so many parties and clubs, so now when I’m not touring I prefer to stay at home. I live in the Finnish countryside, I have a house and a studio there and always have many unfinished projects that I can work on. I like to go for a walk in the forest and also like to cook for myself, mostly Spanish style dishes. And I used to brew my own beer, I don’t do it now, but there was a period when I was experimenting with it and went to the forest to pick hops and different herbs which brought a unique taste to the beer, it tasted really original, more like cider than a regular beer, I didn’t realize before that hops have so much effect on the taste.

So we can say that you are up for experiments not only in music but in beer brewing too?

Yeah, for sure. I’m always up for experiments in life. I like to do things that nobody has done before. I also do and customize some flutes that I’m playing in order to bring a unique sound to my music.

Do you think that living in this Nordic environment, in a country house reflects on your music? In my opinion – most of the interesting music that comes from Finland is really unusual and experimental and has a kind of melancholic vibe compared to your tunes that sound much happier and have a lot of American jazz and funk influences.

I think it reflects for sure. And I wouldn’t compare Finland to other North European countries; its vibe is really different. If in Sweden people are much more social and like to get together for a coffee and to talk about different kinds of things, then in Finland they are much more isolated and like to be left alone and because of it they are in a way much more individualistic then in other Nordic countries. Sometimes it’s hard and I think at some points my music has this spirit of loneliness and I don’t do it on purpose, but there must be some reflection of Finnish national music on the structures and progression of my tunes. And I use this individual approach which is around me when I work with a big team of people. There is no democracy when they are working with me, I don’t like this rebel spirit when somebody begins to argue and to bring some of their ideas into my music, I prefer it when everything is done my way.

My music has the spirit of loneliness

A few years ago you had a project, Cola & Jimmu, many people loved it as it was a kind of comeback to electronic dance music. Do you have any plans to do some dance music again?

Yes, maybe I will do some dance music again. At the moment, I’m talking with Maurice Fulton, he is an American producer and did a single with Roisin Murphy not so long ago. It’s only a plan now, but maybe we will do some house music together.

Maybe I will do some dance again

What other plans for recordings do you have at the moment?

Maybe a new album will come out at the end of the year. I think it will be on the label Philophon, which released my last album too. It’s taking shape at the moment.

You tour so much, do you have some favorite venues and cities where you like to perform most of all?

For now, I really like to perform in Poland, the crowd there is always great and I love Polish food too. I don’t know why, but in Eastern Europe people are usually much more enthusiastic about music than anywhere else. But you never know, the vibe always depends on the club, on the situation and on how drunk people are. Generally, I prefer middle size clubs, when there is closer contact with the audience and can talk with people after the show.

Not yet. I’ve been close by a lot of times as I lived in Barcelona for a few years. But I would love to go to perform there if there are any good clubs or parties that would like to book me.

We really hope that your gig in Andorra will happen sooner or later and thank you Jimi for this great interview.

Mr. C: I honestly don’t think I’d have been such a success without meditation

Ian Anderson: I am a Loner. I am Clint Eastwood in the Spaghetti Westerns. I am Rudyard Kipling’s The Cat That Walked by Himself

Marc Almond: And Now the Underground is Overground

Arnaud Rebotini: It is an artistic reflection of the quarantine reality

Vitalic: I am going back to punk