What is Spanish jamon and prices • All PYRENEES · France, Spain, Andorra 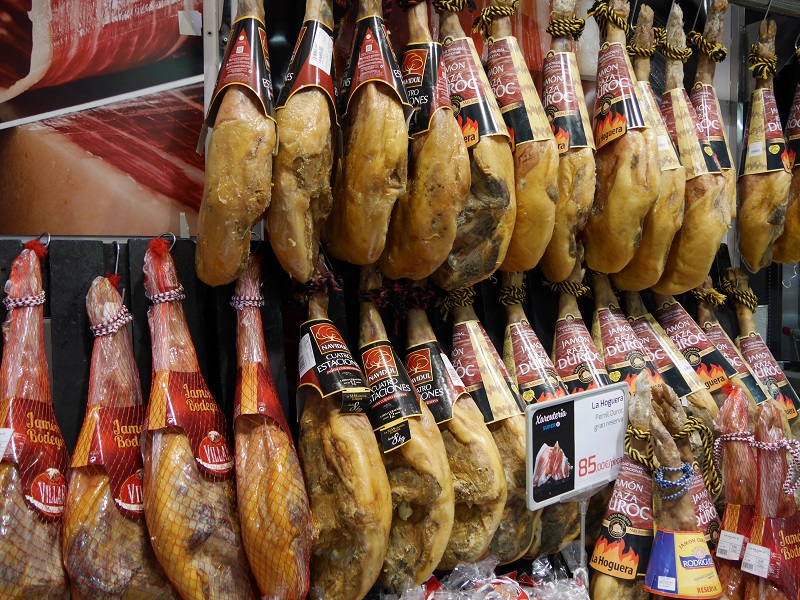 Jamon is the most famous national dish of Spain, made from a pig’s leg. The true Spanish jamon, in accordance with tradition, is prepared and aged for up to 1 year. Preservatives in production are not used, therefore, hamon is considered a rather expensive delicacy.

Traditionally, the most common on sale jamon is divided into 2 types:

– Jamon Serrano – a semi-blooded pig breed without Iberian blood or with a small presence of Iberian blood. A distinctive feature of Hamon Serrano is the hoof of a pig of whiter light (white) color.

– Jamon Iberico – a pure Iberian breed of pigs is used. A distinctive feature of Hamon Iberico – the pig’s hoof must be black (pata negra) .

Jamon also has a classification according to the time-preparing principle:

Origin of the delicacy

The first recipe for making cured ham was written in a book by Cato the Elder (lat. Marcus Porcius Cato) in about 170 A.D. Thus, the age of this delicacy is more than two thousand years old. The recipe has not fundamentally changed to this day: pre-salted pork gammon hung in a cellar from the ceiling, where they had to hang all winter. During this time they matured and acquired their exquisite taste. The product had a long storage time and could be transported over long distances. The Romans who came to Spain appreciated the local delicacy and contributed to its further victorious march through the territory of the Roman Empire. Christopher Columbus took cured ham on his long journeys. Already in the eighteenth century, many countries of the world bought this famous delicacy.

How to make cured ham

The technology of cooking ham is a separate topic. First, to speed up the process of dehydrating the meat, the ham is salted in a large amount of sea salt. The product stays in this state for two weeks, after which it is washed and hung on hooks. After, alongside a gradual increase in temperature, the ham is dried for seven months to one and a half years, after which it is cooled for about another year. The ripening and quality of the ham is determined by special experts. Experts pierce the gammon and evaluate the flavor of the product with a fine needle made (according to tradition) of cow or horse bone. The sophisticated technology involved in cooking ham allows you to achieve an amazing taste which is delicate, elegant and fragrant.

How to choose the best cured ham:

To select a truly high-quality product, you need to learn a few rules:

• The ham should not be sold in vacuum packaging.

• There should be no hair on the leg.

• The leg should be flattened laterally.

Cured ham in Spain is served sliced very thinly. A trained specialist who is responsible for slicing the ham is called a “jamonero”. The ham contains no cholesterol and it can be eaten even on many diets. This meat delicacy is often included as a “tapas” – a set of characteristic Spanish appetizers. The delicacy is produced throughout Spain, with the exception of some coastal areas.

Gonzales Revilla: from 119 euros for 7 kg