In sports, as in life, there are no restrictions when you believe in yourself, thinks Albert Llovera, the only professional motor racing pilot-winner in the world with a disability • All PYRENEES · France, Spain, Andorra 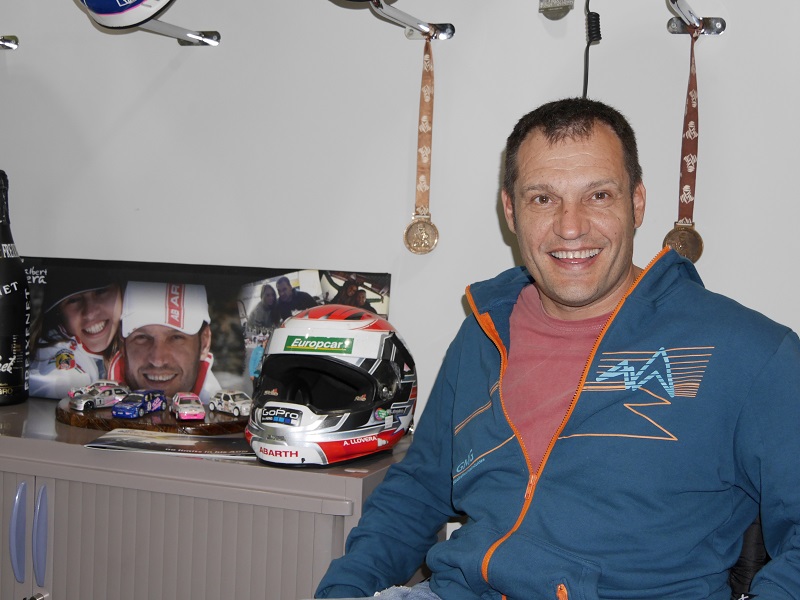 Albert Llovera was born in Andorra in 1966. He grew up in the world of skiing and was competing in the 1984 Winter Olympics in Sarajevo, Yugoslavia, aged 17. In 1985 he returned to Sarajevo to take part in the European Ski Cup, during which he, unfortunately, crashed going 100 km/h on the downhill track, suffering severe injuries that left him confined to a wheelchair. Today Albert is world-known as the only professional motor racing pilot-winner in the world with a disability. He is a Bonver team driver, UNISEF and Fiat-Chrysler autonomy ambassador, motivational speaker, and orthopedist of his own orthotic shop in Andorra. He shared with all-andorra.com his sports career experience as well as his life motivations and plans for the upcoming future.

You have been involved in motor racing since 1987. Your injury came 2 years later. How did you motivate yourself to come back and continue your sports career?

During the first year after the accident, I took part in a NASA (National Aeronautics and Space Administration) research project into spinal cord injuries. I spent several months in the US testing electrical stimulation etc. But I didn’t like to feel disabled. Thanks to this project I started playing basketball. And I started preparing myself to get a driver’s license – as you know, people with these kinds of disabilities need to get a different kind of license. It took me 2 years to learn and practice to drive without legs. I became the first paralyzed in the world who got driver license to compete with other people with no disability. So I opened a big door for other people like me. Having this driver’s license I was able to start doing motor racing. I started with the Peugeot Cup  – the most famous rally in Europe.  I won it in the last race, made money and it motivated me to continue fighting at the national and international level.

Why did you choose motor racing? What was your main motivation?

I was recommended to practice swimming, but I found it very boring. I always needed to feel the speed and have fun from whatever sport I was doing. Motor racing is very similar to skiing for me, I get the same feelings.  The car’s suspension is like your knees. In both cases, you always look in front of you. In both cases, it’s very fast and it gives you an adrenalin rush. I know a lot of skiers who combine skiing and racing because of exactly this!

Tell me, please, about the film “Las alas del fénix”, which is dedicated to you. Who came up with the idea? What is the film about?

This film appeared thanks to my friends. I wanted to transmit the idea that in sports, as in life, there are no restrictions when you believe in yourself. It was released in 2005 directed by my close friend José María Borrell, where actor Javier Bardem, the World Rally Champion Carlos Saniz, and skier Fernandes Ochoa share their memories about me.  There are two versions of the film co-produced by Odisea and Góndola Films: a 20-minute version for cinemas, which obtain a Goya nomination for best documentary short film and an hour-long TV documentary bought by Canal plus, which includes more details about my life.

You are the author of the book “No limits” – why did you decide to write it?

When you have a problem you always look for a way to solve it. With this book, I wanted to explain my personal and professional experience in a light and jovial tone. Now it’s only in Spanish, but I would like to translate it into English, Italian and maybe some other languages.

My book’s style is very similar to my motivational speaker activities. You know, I am invited at least twice per month to take part in different conferences, where I try to motivate people to always try to do their best. I had a lecture in the Andorran prison, for example. I described my life as an example of a protest. Your life is always in your hands!

Basically, I travel to Spain and South America as a motivational speaker. I always try to demonstrate that I am not a disabled person because I can continue living almost exactly the same life as before. And I like it!

You have participated in the Dakar races five times. How was it?

The Dakar rally is a 15-day challenge that makes drivers pass through the most stunning deserts in the world. The organiser is Amaury Sport Organization (A.S.O.) – the company organizes the biggest international sporting events. There are four different categories: motorbikes, cars, trucks and quad bikes.

This year our “truck team” – Bomber Dakar Project – included 52 people with my co-pilot Charly Cotlib, mechanics, doctors and many others. It’s quite expensive to participate in the Dakar race. Each team member has to pay a minimum of 8,000 euros to sign up, and the pilot and co-pilot pay 14,000 euros. But this event is very important to compete in if you want to gain some international recognition – the challenge attracts competitors of over 50 nationalities, who are watched on television by more than a billion viewers in 190 countries.

I have participated five times, but I was able to finish only three times in a row – in 2015, 2016 and 2017. My Tatra was completely redesigned not to involve the legs. It’s very similar to a motorcycle, but a little bit different. A gas button and a brake are situated at the wheel. A gear box is on the right side of the wheel. I do love it but it ruins my body. I had to work very hard with my left hand’s thumb because I manage very high speed mostly by it. It provoked pain and serious disease. This month I had surgery done in one of the clinics of Barcelona. My left wrist is very weak now, I can’t move it as fast as I need to to be able to compete. The next Dakar race is going to be in a short time – it starts in January 2018 in Peru. I am not sure if I will be able to recover for Dakar participation. So I still don’t know whether I will participate or not.

So for the moment, you don’t have exact plans to compete next year?

I prefer to do another race – the FIA World Rallycross Championship (official abbreviation World RX), which is head-to-head racing on asphalt and hard pack gravel. It is very spectacular! A maximum of six cars can participate in a race at the same time. They accelerate from 0 to 100 km/h in 2 seconds! It’s even faster than F1 cars. World RX is the shortest race: four-six laps for five minutes. I have done three races last year and I want to keep on going. It’s much more similar to my personality: the maximum speed at the shortest time. I have a lot of fun and it’s a lot of adrenalin!  Next year there are going to be seven races in different parts of the world.

For people like me, it’s not so difficult. My spinal cord does not transmit information to my feet, I don’t think about my feet at all. So it’s easier for me to concentrate only on my hands.

How long does it take to prepare for the competition? How do you usually prepare?

I do physical exercises three or four times per week. Once per week, I go to the gym. Another day I train with my special bicycle simulator at home with my personal trainer. It takes less time, it’s easier for me and not so dangerous. And I also have my physiotherapist’s appointments every week.

Does your family join you?

When I compete in Europe it’s easier. When I went to South America I had a very tight schedule and was completely disconnected from my family and my friends. I even didn’t have Internet.

You are involved in the development of hand controls for cars and mobility equipment engineering. What exactly do you do?

I work with Guidosimplex Italy company. I am involved in various research projects, helping to create the most comfortable conditions for driving for people with disabilities. If you can drive a car you have more freedom. And this is available even for people who can only drive by using their legs.

Your daughter is an athlete, too. Do you like that she’s chosen a sports career?

My daughter Christina studies now, she is only 21 years old. She did figure skating when she was a child and now she does track race. Yes, I love her choice.

You have an orthotic shop here in Andorra. Did you have to obtain a specific degree to have the rights to open it?

Yes, I studied in Barcelona and I have a license – it’s the same principal as any pharmacy. We offer many different things including sports equipment for people with disabilities: skis, bicycles, simulators, suspensions. It is in demand in Andorra. I know exactly what people need. I use my own  experience to provide people with the maximum comfort on offer.

How do you spend your free time? What do you like to do?

I have a normal life – I do sport, I love to go out with my friends. I travel a lot – normally I spent a maximum of three days per week in Andorra. I love races! I am not a normal pilot, I am extreme. The maximum indicated speed on my Tatra speedometer was 185 km/h and I often over exceeded it.  But this is a truck weighing nearly 9 tons!