In May 2019, the airport of Andorra - La Seu D'Urgell will be ready to take regular flights, says the Minister of Economy of Andorra, Gilbert Saboya • ALL ANDORRA 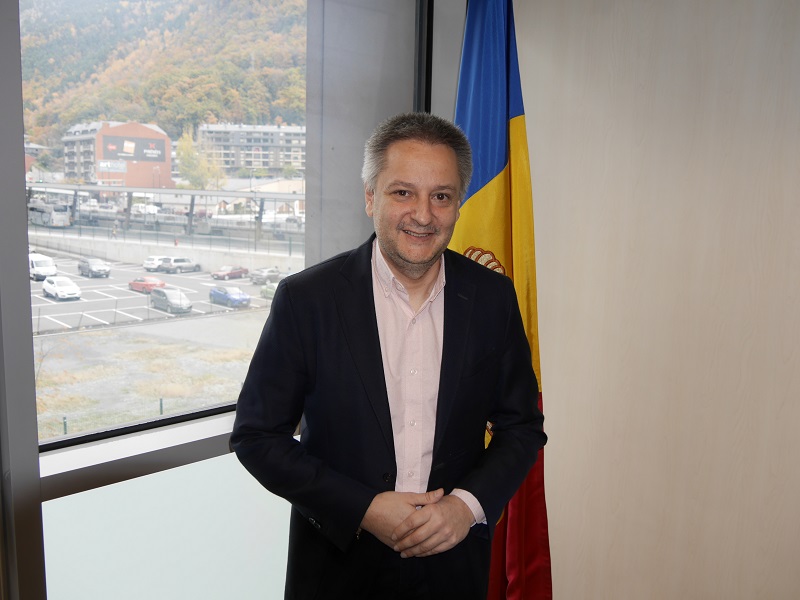 The Minister of Economy, Competitiveness and Innovation of Andorra, Gilbert Saboya, told all-andorra.com about the timeframe for preparing the Andorra – La Seu D’Urgell airport to accept regular flights, as well as other issues related to tourism in Andorra.

You yourself have repeatedly spoken about plans to attract foreign investment to create a “smart city”, with automated traffic control, optimization of logistics within the country, etc. What can you say about the increasing traffic jams, in particular, at the border between Andorra and Spain?

On the border with Spain there are two control points. The customs control, where the police of the National Guard of Spain (“Guardia Civil”) control vehicles leaving Andorra or driving here. The same happens on the French side.

This has nothing to do with the verification of documents and the identification of the person, it is customs. This takes place at the border, that is, at the checkpoint, both on the Spanish side and on the Andorran side.

In addition, Andorra is not included in the Schengen zone. Thus, verification of documents is carried out on both sides of the border. Each check takes time, it’s true, but we will continue to do it. This is for security reasons. We cannot sacrifice safety by optimizing passenger traffic and giving up control — this is not a good idea.

But maybe it makes sense to increase the number of customs officers and border guards?

At the border, there are always the same number of Spanish and Andorran border guards. If we increase the number of border guards, and Spain does not, it will not make any sense. There is no one-way solution to this problem.

But what prevents Andorra from doing this first? Maybe if they did, Spain would immediately follow your example? How do you plan to solve the problem of traffic jams, which affects the ecology and image of Andorra?

It is difficult to find a solution that will help to cope with the peaks when there is a high concentration of vehicles. At this point, the main factor affecting the creation of traffic jams, is slowing down traffic.

In other words, will there always be traffic jams during peak hours?

Yes, because, as I said, Andorra is not part of the Schengen, and this forces us to exercise control at the border. During rush hours it is difficult to avoid traffic moving slowly and, consequently, traffic jams.

Another equally sensitive question. When will the infrastructure of the Andorra – La Seu D’Urgell airport be ready to take regular flights? This issue has been discussed for several years, and we still haven’t seen any progress.

Accommodating regular flights require some tools, including a GPS. In Spain today there is not a single airport that would only be equipped with a GPS. All Spanish airports combine GPS with other navigation systems.

But it is much more expensive. And for the airport of Andorra – La Seu D’Urgell, this is not profitable, because it is located in the mountains and, one way or another, it will not be designed to receive large aircrafts.

Thus, the process of preparing the airport is more complicated. Being the first airport in Spain to use only a GPS, it takes longer to launch.

The reality is that for the first time an aviation project for the introduction of a GPS system was initiated in July 2017. Thus, the three parties – the authorities of Andorra, Aéroports de Catalunya and the competent authorities of the Spanish government began working together to prepare the air navigation project only in 2017.

The schedule for the date of completion of the design phase of the GPS system is December 2018. If the project is approved, we will be able to proceed to the implementation phase.

If everything goes according to plan, and this is always possible, although we have to be careful, by May 2019 we will have an airport equipped with a GPS system capable of taking regular flights.

Will the airport be able to provide both regular and private flights?

How much does it cost for Andorra?

Since this is the airport of Catalonia, Andorra is not the main investor of this project. Andorra contributes 300,000 euros annually.

I read in one of the local newspapers that there is an alternative project that was recently offered to Russian investors – the construction of an airport in Andorra. Is it real?

The priority of the Government of Andorra is the airport of Andorra – La Seu D’Urgell. This is an existing infrastructure and it is located near Andorra. The airport will be able to take aircraft that are cost effective. Once again, this is our priority.

The Chamber of Commerce of Andorra (Cambra de Comerç, Indústria i Serveis d’Andorra) is exploring an alternative project, but we will be very careful with the conclusions of the research.

We also read in the media that the presentation was made to Russian investors, but the Andorran government did not participate in this initiative.

This is a matter solely of your competence as a minister, however, you did not personally participate in the discussions. Why?

Once again – we will be very careful to study the results of the research. Technically, in principle, creating the infrastructure of a new airport in Andorra is much more difficult than launching the existing airport in La Seu D’Urgell.

Perhaps, instead, it would be better to extend the railway line from the l’Hospitalet train station in France?

This is a big investment. In addition, the whole line should be improved from l’Hospitalet to Toulouse. I see only two short-term solutions to improve logistics. This is the airport in La Seu D’Urgell and the construction of a helipad in Andorra.

At what stage is the construction of the heliport?

The first stage began. We need to make sure the project is good and fully viable. A study is currently being conducted with the participation of French experts to verify the first phase. The proposed location is Encamp, next to the energy company FEDA.

A question about driving licenses from our readers. Why does Andorra not recognize the driving licenses of citizens of the USA, Canada, Mexico, Russia, Ibero-American countries, with which Andorra has such active contacts in the field of economy, politics and culture, as well as Australia, Japan, China, Singapore, India, Indonesia and New Zealand?

Negotiations with the countries of origin are required to confirm driving licenses. These agreements should be mutual. It is necessary to provide for homologation for the inhabitants of these countries in Andorra, as well as for the Andorrans living in these countries. There are countries for which these negotiations are not among the priorities. In some cases, there is complete homologation, and in some we recognize the theoretical part, but we ask you to confirm the knowledge of the practical part.

What about the French and the Spaniards?

It is obvious that a large number of Spanish and French citizens live in Andorra and vice versa, and we have long-standing deep bilateral relations. This is a mutual agreement. Gradually, we are trying to reach bilateral agreements with most European countries. This is easier, because the type of exams we have is very similar. On the whole, our goal is to facilitate this process for all those who live in Andorra, as well as for Andorran citizens living abroad.

But, on the other hand, Andorra recognizes the driving license of EU member states. For example, if a citizen of the USA or Russia has a driver’s license issued in Italy, he can easily change it to an Andorran one.

Recently there were similar negotiations with the UK. But today only one solution is possible: in order to get a Andorran driver’s license, you must pass the practical part.