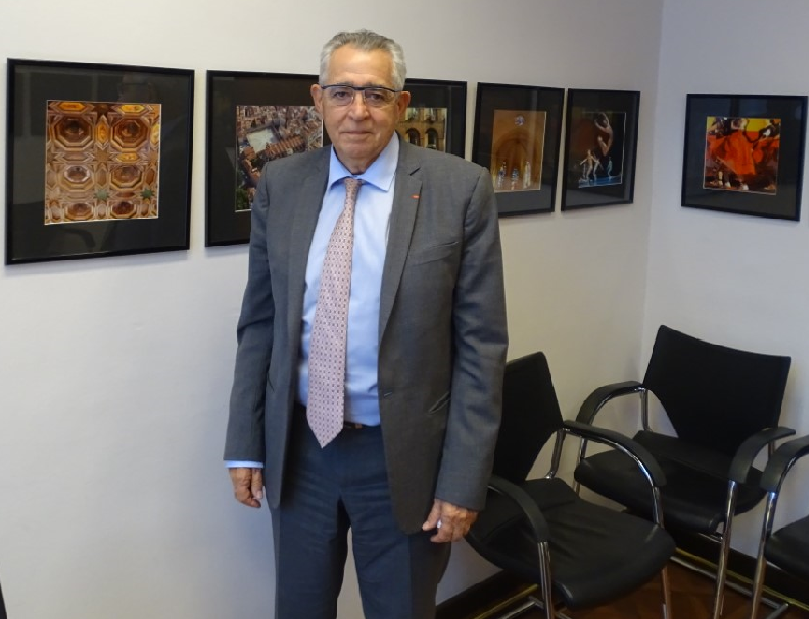 Jean-Marc Pujol, a tax lawyer, has long been Mayor of Perpignan. At first, he was an assistant mayor of this “Catalan city” of France, and since 2009 he himself was elected mayor. He has also been president of the Perpignan Méditerranée Métropole urban community since 2014. He agreed to meet with all-andorra.com for a thorough interview discussing many topics, including the independence of Catalonia.

You are the mayor of Perpignan since 2009 and the president of the city’s urban community since 2014. What is interesting in your city? What makes Perpignan attractive?

Well, all French know Perpignan. When you watch the weather forecast on French television channels, you always know what the weather is in Perpignan, because it is the best in France! But seriously, in my 2014 election campaign, I announced that I intend to make Perpignan a famous tourist destination. Today, Perpignan is a city that is one of the five best cities in France in terms of population growth. 123,000 people live here, and the urban community is about 300,000 people, that is, almost two-thirds of the department of the Eastern Pyrenees.

The proximity of the sea is the main tourist attraction in the summer. But for Perpignan, it’s important to be an attractive city to visit all year round. The organization of events such as Visa pour l’image (international festival of photojournalism), Live at Campo (summer music festival in the open air), as well as exhibitions at the Hyacinthe-Rigaud Museum, allow us to do this.

Perpignan is a city with a wonderful heritage, which is not well known. Here is the medieval palace of the kings of Mallorca. The history of the city is hidden in its ramparts. The cultural heritage and architectural style of Perpignan is important to understand our city.

What can you say about the budget of Perpignan in terms of management, debt reduction, etc.?

Before becoming mayor, I worked as a tax lawyer. I’m used to managing finances. The mayor manages the money entrusted to him by taxpayers. We must not forget about responsibility. In France, unfortunately, this is not well remembered.

I put in a lot of effort, and this year the tax authorities ranked us as the best city in France in terms of accounting quality and financial management.

With personal money you can do what you want, but with public money you need to be careful. This is the basis of my approach to managing public money—on caution and seriousness.

Is the city’s economy built on tourism or are there other sectors that are profitable?

Logistics is an area that is developing rapidly today. We have the well-known vegetable market Saint-Charles—this is the number one market in France where you can buy the best vegetables and fruits. I can say that it is even better than the Rungis market (located near Paris) in terms of variety of choice and quality of fruits and vegetables. Logistics is perfectly adjusted – Saint-Charles is receiving a flow of products from Spain, as well as from Morocco and other southern countries.

Among the most famous brands of our city, I can name our Cémoi chocolates.

The south of Perpignan is developing most dynamically. What kind of business is there mainly represented?

First, this is a business related to the service sector, as well as agribusiness. Near the airport is the territory of Torremila, which is quickly established. Initially, it was an area of 60 hectares, today it is almost full. Today there is only one attractive piece of land. And I decided to prepare for the sale of these remaining 40 hectares, of which we are the owners. This will contribute to the growth of the city’s economy.

Our land policy is equally fair and prudent, and we are available to all enterprises that want to settle here. And we do not want to wait long.

Can you say that you work closely with private investors?

Yes, and I have developed many options for economic development. One of them is the sale of land in the vast majority with a small profit. There are even unprofitable land projects. But land needs to be sold to open the way for business.

Investing is a priority. I study all the proposals, and as the president of the city community, I meet potential investors within 48 hours after their official appeal.

This is an important part. We still have the problem of developing the airport. The national company, Hop, does not maintain Perpignan very well. However, we managed to attract low-cost airlines, such as Ryanair, which fly to England, Ireland, Belgium, as well as to Marrakech (Morocco) and Oran (Algeria).

We plan to create a hub for flights to North Africa.

What else is in the plans for the development of the city and the community?

There is a project for the construction of a sports stadium – both for sports and for events. This is what the city really lacks. We are talking about the stadium, which will take from 2,500 to 5,000 spectators at a time. This project is supported not only at the regional, but also at the state level.

What is the situation on the property market in Perpignan?

The price per square meter ranges from €1,200 to €1,400. I am talking about an old housing stock. If we talk about new residential buildings—this is from €1800 to €2,200. Development land costs from €160 to €300 per square meter. It is not difficult to find land for development here, and this factor holds back prices.

Perpignan is surrounded by three major cities. From the side of Occitania—this is Toulouse and Montpellier, from the side of Spain in the south—this is Barcelona. Does it contribute or, conversely, impedes the development of the city?

We try to ensure that the proximity of these cities contributes to the development of Perpignan. We are trying to “play a card” of territorial appeal. Today we see that especially from Toulouse there is interest in our city. Some Toulouse companies want to settle in Perpignan.

Montpellier is more attracted to the Rhone Valley.

For Spain, our city is also attractive. Many Spanish companies opened a business here several years ago. And this trend continues. The resettlement of the Spaniards was especially active until the death of the Spanish military and statesman, Caudillo of Spain, Generalissimo Francisco Franco (Francisco Franco, died in Madrid on November 20, 1975).

Among the examples of such companies I can name Anecoop, Fontestad, Ausa. It is our tradition to work with Spanish companies.

The identity of Catalonia is historically strong for Perpignan. What can you say about this?

We work a lot, primarily in the cultural sphere. This year we are the capital of Sardana (national Catalan dance). We are trying to explain to the younger generation what Catalonia is. It is a cultural unit, it is a different culture, and it is not a political identity. Yes, there is a difference between our countries, there is a border, but we can easily live with what is happening on the other side of the border. An important role in my perception of Catalonia from the point of view of its originality was played by the former head of the Generalitat (Government of Catalonia) Arthur Masa.
We are involved in what is happening in Catalonia; this is part of our culture.

What do you personally think about what is happening in Catalonia on its Spanish side?

First, I would say here about our solidarity. Other decisions could be made. Even if I didn’t want to intervene, I would still skip that those accused of separatism could not be judged so harshly. I think there was no need to imprison them.

I have always been a supporter of the referendum, which would affect the entire Spanish people and help to decide what Catalonia really wants, what its guidelines are.

I think that every Spaniard should be able to decide and vote on Catalonia, and, as a result, perhaps change the law, as, for example, happened in the case of the Basque Country.

What is the relationship between Perpignan and Andorra?

We have an excellent, strong relationship. In the history of Andorra there is a lot of ‘Perpignan’. I am glad to see the evolution of Andorra, and I am glad that the country is changing for the better. It really becomes a ‘high level centre.’”

Are there common projects of Perpignan and Andorra, for example, in the field of culture?

Yes, this year our Regional Conservatory—one of the first conservatories in France—performed with a concert in Andorra. I can’t say that relations in the field of culture are very developed. We are trying to strengthen them.
We also have economic relations, but they are more associated with individuals, rather than legal ones. I think Andorra is more oriented towards Spain in economic matters.

In the field of education, we also have agreements, we have many students from Andorra, and our universities welcome them. You can get professions related to law, culture, international activity, science, research. Our laboratories are among the best in Europe.

There is also a university of sports—STAPS—which is located in the mountains in Font Romeu. There are also many students from Andorra at this university.

You said Perpignan is known for good weather. But the city is also famous for its rugby clubs. Please tell us more about this.

We are one of the few cities in France where there is rugby 15 and rugby 13. Our sports club is the most popular in the Anglo-Saxon world and in England. They even know about our club in Australia!

Two stadiums, Aimé-Giral (USAP) and Gilbert-Brutus (Catalan dragons), belong to the city. Now, as I have already mentioned, we will build a third site.

Perpignan is known for the Visa pour l’Image festival, which takes place in late August to early September. This is an important international event. What else is important in the cultural field held in the city?

Yes, Visa pour l’Image is an important event in the field of international photojournalism, the former Minister of Culture of France Renaud Donnedieu de Vabres is the director of this festival.

There is also the Archipelago Theater (l’Archipel), which today is an important part of the national stage of France. The theatre occupies a building designed by architect Jean Nouvel, there are many various show productions.

The Hyacinthe-Rigaud Museum has recently been opened. It recently hosted exhibitions dedicated to Picasso, Dufy, as well as the exhibition, which is a kind of confrontation between Rodin and Maillol. Museum attendance is up to 80,000 people per year.”