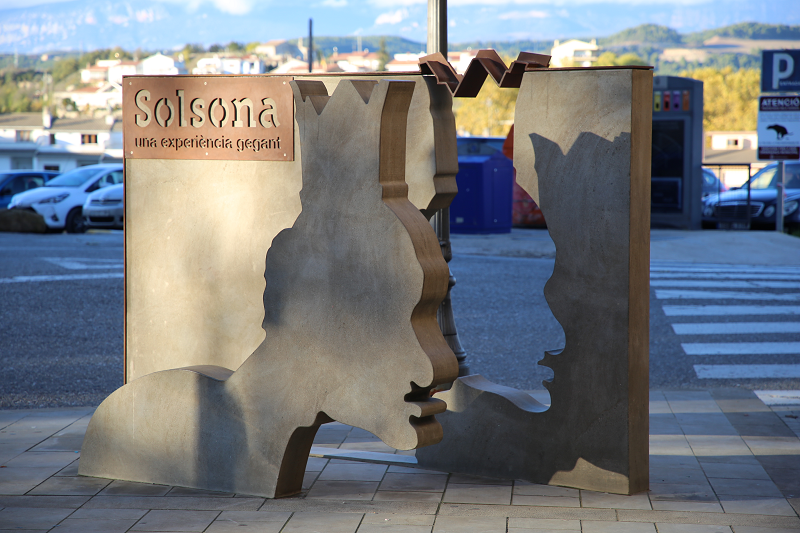 Solsona (cat. Solsona): in the times of the ancient Romans, this settlement was called Setelisis, then the Visigoths, like many other place names, added the suffix “- one” to it: this is how Celson appeared. The period of Saracens’ dominion, judging by the lack of historical evidence, passed unnoticed and lasted for a couple of generations.

The formation of Catalonia began around the year 870 thanks to Count Wifred the Hairy’s efforts (cat. El Comte Guifré el Pelós) to settle vacant lands. Recent studies indicate that this count was mortally wounded in the territory of the Solsonos region, namely, in the castle of the town of Canopy in the valley of the Aiguador River.

By the 10th century, Solsona was developing and a castle and a church appeared in it. The birth of a settlement around these two strongholds led to the double jurisdiction of Solsona: it submitted to both the Duke of Cardona and the bishop. Both seniors could not enter into their rights of the rulers of the settlement without taking an oath to keep the others’ customs and privileges.

The coat of arms of the city preserves the medieval symbols of their seniors: in the center is the cross of the monastery of St. Mary, on the left – the tower of the Tarroja family and on the right – the thistle of the dukes of Cardona. The sun shining over the cross appeared later.

Solsona played a very significant role in the reconquest of the Segarra and Penedès regions and the city of Lleida.

Many of the Solsona surnames appear in the certificates of the settlement of the conquered lands. St. Mary’s Monastery received generous donations from these new regions. The Counts of Urgell considered Solsona St. Mary to be the patroness of Reconquista and wanted to be buried in this “world-famous” Solsona monastery.

In the 13th century, a weekly market already existed in Solsona as trading life and artisanal crafts flourished. There are also the first testimonies of the Jewish community. Around 1299, the abbot Pons de Vilaro began to build a new, Gothic temple. During the Catalan expansion across the Mediterranean Sea, the lords of Salsona, the family of Tarroja (els Tarroja), occupied the city of Alguer (l’Alguer) (1181), and merchants founded companies for the sale of wool; on their own ships they plied between North Africa, Constantinople and Flanders. Their fame was so great that the author of the chivalrous novel ” Curial e Güelfa ” displayed one of the characters of the Solsona merchant – Pere Perpunter, who freed the Curial from Tunisian captivity.

The XIV and XV centuries marked the time of decline. Judging by the documents found, the mismanagement of the last superiors led to the fall of the role of the monastery in the life of Solsona. The plague epidemic of 1348 led to the extinction of the comarca population, and many farms were abandoned. The plight of the peasants led to the outbreak of civil war against King Juan II (1462-1472). However, there were some positive changes of this period, for example the construction of a new city wall (1303), three new public fountains which were supplied with water from the Mirabelle source (1420) and the Llober Hospital (1416-1431), as well as the permission given by the daughter of King Juan II to hold the fair in Solsona on the first Monday after Easter (1476).

One of the key moments in the history of Solsona was the establishment of an episcopal chair in the city; the cities of Manresa and Balaguer also claimed this role. At the end of the XVI century, the south of France was filled with heretical Protestants who raided the lands of Solsona. In addition, in the surrounding mountains there were a lot of robbers who also greatly annoyed the residents.

As a result, the King of Spain, Philip II, turned to Rome with the request to create the Solsona eparchy as a barrier and outpost. Pope Clement VIII in 1593 granted the request of the monarch, and the old church of the canon-Augustinian monastery turned into a cathedral. The following year, the king granted Solsona the title of a city: by that time in Catalonia only ten settlements had the status of cities.

At the same time, the decline of the Catalan language began. At a time when the Spanish language conquered the privileged strata of society, and Castilian bishops were appointed to the diocese, Solsona retained the Catalan language in street comedies, carols, folk stories, religious poetry, gigs and in church liturgy and sermon.

In the 17th and 18th centuries, the passionate age of the baroque period began. It was in Solsona that the great artist Francesc Ribalta was born (Spanish Francisco Ribalta), who is considered to be the founder of the Spanish school of painting of the Golden Age. Also worth noting are the creators of the famous baroque iconostasis: the Morato dynasty, which created the altar of the Sanctuary of the Miracle, and the family of Pujol – sculptors of the altar of the chapel of Our Lady of Dals Coal in Saint-Llorens de Moruns.

In 1620, the Literary University was created, led by Dominican monks. With the opening of the university, the cultural life of the city gained a second life.

In 1652, Solsona, who had survived the plague, proclaimed the Mother of God of Cluatra as the patroness of the city.

The economic life of Solsona is clearly reflected in the long list of handicrafts. Historians name more than 100: wool for yarn, knives, representatives of another flourishing industry.

The economic prosperity of the late 18th century was also reflected in the construction of numerous outstanding buildings, such as the monastery, the Piarist school, the city bridge, the L’Afraou aqueduct, the city’s Bridge Gates, and especially the Episcopal Palace by the work of the architect Francesc Pons, who was said to not know how to read or write but he knew how to build palaces.

In the Catalan wars, Solsona never took the side of the Spanish crown and always lost:

In the War of the Reapers (1640), the city resisted the siege for so long (1655) that Juan of Austria himself, the son of King Philip IV, arrived in order to conquer Solsona.

In the War of the Spanish Succession (1714), Philip V closed the Literary University and exiled the Solsona bishop, Francesca Dorda, who took the side of Archduke Carlos.

During the war with Napoleon (1810), the French burned the cathedral. It is said that the godless General MacDonald ordered “a cathedral – but without a bishop and canons – to burn.”

In the first Carlistian War (1833–40), Solsona was at the center of the hostilities and suffered so much significant destruction that the writer Perez Galdos in his “National Episodes” referred to Solsona as “the ugliest city of the Christian world”.

The restoration of the city in the second half of the XIX century was long and slow. In addition, the city still had to fight for the return of the episcopal chair, which was abolished by the 1851 Concordat.

The industrial revolution did not affect Solsona too much: the rivers that had turned into engines of the industry flowed far away from it, the railway never came, and the automobile roads appeared late. This led to the slow growth of Solsona compared with other Catalan cities. Many families left the city for work in factories growing on the Llobregat and Cardener Rivers.

The old part of the city still retains its medieval layout, walls and gates, narrow streets, squares, fountains and ancient buildings, of which the Lothère’s Gothic Palace, (which now houses the Council of Comarca), the Renaissance City Hall (formerly a merchant house), stand out in the square of Saint-Juan, where the poet Juzep-M. de Sagarra dedicated the famous poem “The Memory of Solson”, as well as Llober Street, where the houses of merchants and canons are preserved, and the Bishop’s Palace (now a museum), alongside the cathedral in the early Gothic style, in the transept of which is the chapel of the Virgin of Cloatra – this sculpture is considered one of the best made in the Romanesque style.

Today Solsona is a city with great historical heritage and lovingly kept traditions; at the same time, it does not hide behind its walls, but grows and gets upset at a rapid pace. During the last economic crisis, Solsona survived, thanks to the intensive trade in products produced in the region itself, which can be easily seen by visiting the market on Fridays and small businesses that provide the city with work and vital energy.

Solsona is a city where olives grow and spawns flourish. This is a city full of life and aspirations, which in the heart of Catalonia is fighting for its active place in modern history.