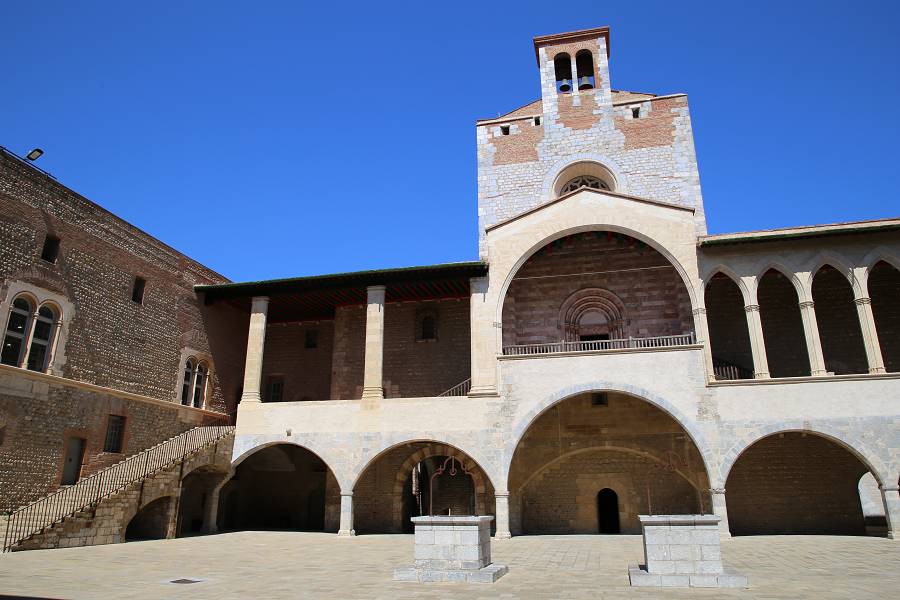 There are several legends that try to explain the creation of the city. One of them explains that it was founded by shepherds of Albera who fled a large fire in their mountains. They would have given the name Pyrepinia to their foundation, which would have the meaning of ‘the beginning of a fire’ in Greek or Phoenician. Another legend speaks of Pere Pinya, a farmer from the Cortals, in La Cerdanya, near Montlluís, who being tired of the cold weather of his native town, came to look for a place by river Tet, where there is a more temperate climate. Jacint Verdaguer talks about it in his Canigó.

Another legend says that the name of the town comes from a hotelier, Bernat Perpinyà, settled on the Place Cebes (now, Place Josquin Després), near the primitive gate of Elna, from where a good part of roads started, to the east, south and south-east of Roussillon, in the district of Sant Joan. His house had a carved pineapple on the facade. It has been possible to confirm that the house, now disappeared, had existed, but it was from the 16th century.

On the site of the Mas Bruno numerous remains of ceramic from the Neolithic were found.

The origin of the town is not clear, but everything refers to a Roman foundation, at least with respect to the name: an agricultural exploitation Roman colony, called Villa Perpiniani, from the Latin given name Perpinius, possibly from Ruscino. This hypothesis is corroborated by almost a hundred deposits of Roman remains throughout the communal territory. All of this suggests that the origin of Perpignan is due to an agricultural exploitation that did not become a settlement until the Middle Ages. Within the current commune of Perpinyà, numerous remains of Roman ceramics and fragments of Roman, Iberian, Punic and other origins have been found, as well as important remains of Roman habitats, predominantly from the Republican era and of the Early Roman Empire, mainly of agricultural character.

They have been found throughout the territory, and some have been destroyed by the new communication routes, especially to the west of the Roussillon capital.

Only starting in the Middle Ages, especially in the 10th century, the town began its true development. Since it was already the capital of the county of Roussillon, after the decadence and abandonment of Ruscino, it was growing in importance. Further on, it even attracted the bishop, a resident of Elna, head of the bishopric. In the 11th century it already had its own weigh measure and currency, which shows the importance of the town and the trade that was generated there. The oldest text referred to the village is from around 950, it is a sale of two allods, their termination states: “de alio latere in ipso termino de villa Cabestagnio et de tertio latere in termino de villa Perpiniano”. In 961, Ramon, Count de Roergue and Marquis de Gòtia, speaks of this allod and rents it to Sant Pere de Rodes monastery and the cathedrals of Elna and Girona. Guasfred, Count of Empúries-Rosselló, acquired it and passed it to his son Gilbert, first count of Rosselló. It was Gilbert who established the capital of Perpignan in his county.

The town of Perpignan originated, like many villages of Roussillon, in the settlement formed around the parochial church of Saint John the Baptist and its cemetery. This village, although it was largely destroyed during the build of the current cathedral, can still be recognized in part in the urban layout of this sector of Perpignan. The first hospital in the city, also dedicated to Saint John, was in the interior of this settlement, at the west and northwest corner of the church of Saint-Jean le Vieux, while to the east of it was the former Comtal Palace of Perpignan, later the Episcopal Palace.

In 1172, Perpignan was integrated into the Crown of Aragon. Since 1197, Perpignan had a municipal charter that established its organization. Its inhabitants enjoyed extensive privileges, such as being able to choose consuls, one for each social class. The city acquired the protection of a large defensive wall in this process.

Between 1276 and 1344, Perpignan reached its golden age, the town became part of the Corona de Majorca and became one of the three most important cities of the Crown (together with Palma and Montpellier). Its population and its surface quadrupled in less than a century. It was the time of great workshops, the cathedral and the Royal Palace of the Kings of Majorca. In 1344 it lost its capital status due to the reintegration of the Kingdom of Majorca to the Crown of Aragon. Since 1346 it was heavily affected by black plague and the city did not recover. In 1415 it was the headquarters of the Perpignan Conference.

On May 9, 1462, by the Treaty of Bayonne, John II of Aragon ceded the counties of Rosselló and Cerdanya, to the French king Louis XI, in exchange for military aid, worth 200,000 shields, to face the Catalan Civil War. In 1473 Pere de Rocabertí, at the head of an army, regained Perpignan, which was retaken by the French on March 10, 1475. Since 1479, Perpignan entered into a military logistic, enclosed in powerful walls that will be reinforced at all times.

During the 16th century, various wars took place between the empire of Charles V and the Kingdom of France for the pre-eminence in Europe. The fourth one, the War of Italy, was declared by France in an alliance with the Ottoman empire, Denmark, and Sweden, and during its course the imperial troops commanded by Captains Cervellon and Machichaco resisted the siege.

The Dauphin of France and the future king Enric II besieged Perpignan with 40,000 men, until the defenders held out against the French artillery that attacked the walls, and resisted until the arrival of the army of the Duke of Alba, and the sometent who raised in Catalonia, which caused the retreat of the dauphin of France.

During the Reapers War Perpignan was occupied by French troops who had the support of the Catalan rebels in September 1642. After the surrender of Barcelona to King Philip IV, in 1654, the Generalitat of Catalonia moved there. The signing of the Treaty of the Pyrenees (1659) between Louis XIII and Philip IV led to the annexation of the city and the rest of Northern Catalonia to the French crown. In 1660 the Generalitat was suppressed by the French monarchy.

During the War of the Succession (1705-1714), the Ciutadella de Perpinyà, which had a Military Hospital, was one of the key places in the organization of the Bourbon armies that intervened, both in the war in Catalonia (mainly in Girona, Olot , Camprodon, Puigcerdà and the whole northern sector of Southern Catalonia), as well as in the organization and supply of the detachments created for the defense of the castles of Roses, Girona and Bellver de Cerdanya. Practically throughout the whole war it was in the hands of the french army.

With the creation of the department of the Eastern Pyrenees, shortly after the French Revolution (March 4, 1790), Perpignan became the capital of the department. In spite of its provincial capital status (and later departmental), the headquarters of an Intendance and a Sovereign Council, Perpinyà was vegetating: the city at the beginning of the 19th century was more or less the same as in the 14th century. The walls were demolished at the beginning of the 20th century, and the city spread over the Roussillon plain. Its agglomeration today concentrates most of the inhabitants of the department. For some years now, the city seems to have a certain dynamism, among others, thanks to the rapprochement between the local authorities and the Generalitat of Catalonia. In addition, the construction of the Théâtre de l’Archipel, by the renowned architect Jean Nouvel, attracted many newcomers.