Heads of Andorra, Monaco and San Marino have met today to discuss an association agreement with the European Union • All PYRENEES · France, Spain, Andorra 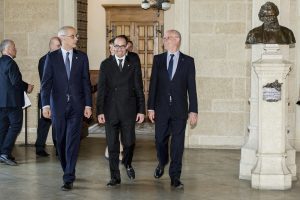 The Head of the Government of Andorra Antoni Marti, Minister of State of Monaco Serge Telle and Secretary of State for International and Political Affairs of San Marino Nicola Renzi have met today in Palazzo Begni in San Marino to discuss the status of negotiations on an association agreement with the European Union.

The parties agreed to continue joint work and negotiate on the basis of the peculiarities of each state, positively assessed the prospects for integration with the EU, expressed mutual understanding on all major issues, and also agreed that negotiations on their behalf would be conducted by Maria Ubach.

Following the meeting, three leaders took part in a special program on public television in San Marino, where they were given the opportunity to comment on the prospects for entering the domestic market of Europe.

The next meeting of the leaders of three countries will be held this fall in Andorra. As expected, the President of the European Council Donald Tusk will join the meeting.