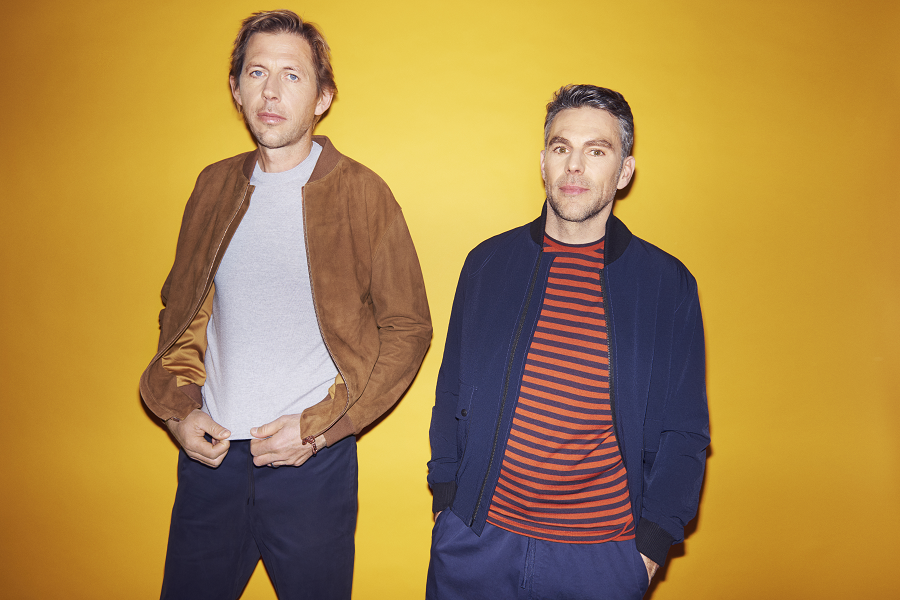 Tom Findlay about the new Groove Armada album, his way of life during pandemic, missing touring much, bad government management of the coronavirus epidemic and other themes

Groove Armada is a musical collective that always manages to find a clever balance between massive commercial success with their catchy dance floor pop-hits and interesting and forward-thinking sound with an eclectic mix of different musical genres including house, disco, hip-hop, dub.

This English electronic music duo was formed in 1997 by its permanent members Andy Cato and Tom Findlay. First album “Northern Star” helped Groove Armada to get highly acclaimed as one of the new and fresh bands on the territory of downtempo and trip-hop music. Their next album “Goodbye Country (Hello Nightclub)” showed the bands further musical evolution and marked the departure from the trip-hop roots to a more upbeat music, which was most clearly demonstrated on their Grammy nominated super hit “Superstylin”.

Next works helped Groove Armada to work up further a reputation of one of the greatest creators of contemporary dance music that is never dull, always full of surprise twists and a sense of humour. As well as always catchy tunes Groove Armada also got noticed as a band with a strong visual part that can be seen in their great musical videos and well-thought-out shows.

To the delight of fans, the new ninth Groove Armada album is almost ready. The first track from the album “Get on the Dancefloor” was released just a few days accompanied by a funny lo-fi video that deals with such up-to-date themes like quarantine reality and leaving in isolation. We had a lucky chance to talk to Tom Findlay about the musical direction of the new album, coronavirus impact on the art world, missing many live shows, his general thoughts about the pandemic situation in England and much more as well.

Hi! Thank you very much for finding time for this interview—that’s a big honour. Groove Armada have just released a new great track and brilliant video “Get on the Dancefloor”. Can you please tell a bit about this work?

Well we’ve been working on a new album, and “Get on the Dancefloor is the first track from it. The album is done, though we’re still messing around with it a bit we can’t wait to share it with the world. In terms of the ideas behind this specific track, we started with the vocals and worked backwards. The groove was played by Andy’s band in France, then mixed down in my studio in North London. It’s a truly European project.

And when the new album will be put out?

The plan is shifting all the time … but it will be dropping later this year.

Groove Armada is known for working with different great singers. Who will be the voices of the songs this time on the forthcoming album?

Well we’re still trying to secure one or two exciting names. But so far, it’s Nick Littlemore (one half of Empire of the Sun), Kerry Latham, James Alexander Bright, Todd Edwards … who’s a New Jersey producer and has sung on a few songs for Daft Punk.

Does this happy disco house vibe of the new song represent the general music direction of your new album?

In this new video you deal with a sense of humour with such up-to-date themes as quarantine reality and living in isolation. What kind of impact in your view will these quarantine days have on the art world?

I think it’s too early to say, but it’s a great time to try and be creative, to make stuff to keep us all sane. Obviously, the big question is, When can we come together again and party? And I’m afraid that’s down to the crew in white coats to solve that one for us. But I have faith. If we could be gigging again next Summer 2021, I’d be thrilled.

Groove Armada has a bunch of very well directed videos, that are made with a cinematographic approach. Do you have some directors that you prefer to work with and favourite Groove Armada videos that were done before?

Not really, it’s just a case of finding the right fit for the song. I have gone back over our videos recently and loved the video to “Paper Romance”, and even though I didn’t love it at the time I think the video to “My Friend” captures a moment.

Usually, Groove Armada have a well-thought-out show for each tour, with great lighting and visuals. Do you have in mind a great show for the tour with the new album?

Well, it’s more about the tracks that we can put into the show, and yeah, “Get on the Dancefloor” will be a killer addition to the new set. I know the lighting director is working on ideas right now …

Do you miss touring much?

Ah, I miss it too much, but I’m also aware that people have much bigger problems right now. A dream scenario would be to be playing again in March 2021 touring this record, but I think Summer 2021 feels more realistic. Almost all the shows that were cancelled this Summer have booked us again for next year, so 2021 could be one hell of a summer …

How do you mostly fill your quarantine days, did this pandemic situation have a significant impact on your lifestyle?

I’ve been trying to keep things nice and mellow for my kids, just cooking, supporting them, making lots of soup! But I’m planning to get into the studio again next week, and I’ve got more time to practise the piano. I think it’s always helpful to think about what you can do rather than agonising about the things you can’t.

Many artists are filling their time during quarantine days with a lot of on-line activities that gives a lot of content to fans—like direct on-line broadcasts of live’s and DJ sets. Don’t you have any thoughts of bringing such kind of content to your fans?

I’ll leave that to my management. They’re good at that. And I’ll do what I’m told! I have a monthly radio show on Soho Radio and that’s a great way to reach out.

What are your general thoughts and feelings about this pandemic situation?

I’ll answer these together. In terms of the pandemic, I am saddened by how the government has managed things, though at the same time not massively surprised, they’re “a shower of …” The NHS (United Kingdom National Health Service) have been amazing, and I am so full of admiration for frontline workers who are putting themselves on the line for us.

We really hope that these hard days will be over soon and thank you for an interesting talk, Tom.

Thanks for having me.