The Government of Andorra supports the Minister of Finance Jordi Cinca in response to a lawsuit from the lawyer of ex-president of Orfund group • All PYRENEES · France, Spain, Andorra 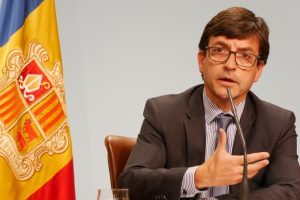 The Government of Andorra supports the Minister of Finance of Andorra Jordi Cinca in response to a lawsuit (to Tribunal de Corts) from the lawyer of ex-president of the Orfund group Joan Samarra Naudi.

The lawsuit was filed in November last year for unfair competition, theft and money laundering, allegedly committed by Jordi Cinca 16 years ago, when he headed the Orfund company.

In particular, the lawsuit says that Orfund went bankrupt due to criminal activity of Jordi Cinca – namely, theft of gold bullion and diamonds from Liberia to his own benefit.

Jordi Cinca has already said that the charges were “completely false”, and claims that all transactions of the Orfund company were “entirely legal.”

The lawsuit is planned to be considered in the Tribunal Court in the coming weeks.