Gilbert Saboya held a serie of bilateral meetings within the framework of the 23d session of the Council of Foreign Ministers of the OSCE participating States • All PYRENEES · France, Spain, Andorra 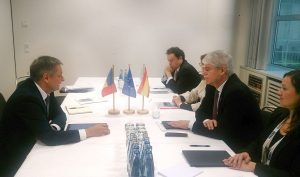 Foreign Minister of Andorra Gilbert Saboya held a serie of bilateral meetings within the framework of the 23d session of the Council of Foreign Ministers of the OSCE participating States. The meeting took place in Hamburg, Germany on 9th December.

In particular, he discussed with his counterparts from Spain, Slovakia, Monaco, Switzerland, Ireland, Slovenia, Hungary and Poland the status of negotiations on the establishment of association of Andorra with the European Union. Gilbert Saboya and his colleague from Monaco Gilles Tonelli confirmed the joint desire to search for the best ways of integration of small European states with EU.

In addition, Gilbert Saboya discussed with the Minister of Foreign Affairs of Ireland Dara Murphy and his colleague from Slovenia Karl Erjavec the prospects of concluding an agreement on avoidance of double taxation.  The meeting with the Minister of Foreign Affairs of Switzerland Didier Burkhalter was devoted to the issues on international taxation. With a colleague from Hungary Péter Szijjárto Gilber Saboya discussed the possibility of signing an agreement on cooperation in tourism and higher education.

With a colleague from Poland Witold Waszczykowski Gilbert Saboya discussed the recent ratification of the Convention on Mutual Administrative Assistance, as well as the possibility of the official visit of Minister of Foreign Affairs of Andorra to Poland in the first quarter of 2017.