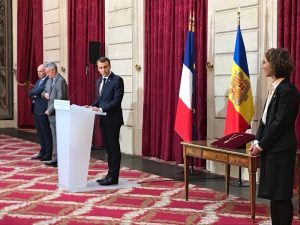 The President of France, the co-Prince of Andorra, Emmanuel Macron, held a ceremony at the Elysee Palace to present credentials to ambassadors of different countries accredited in Andorra. The ceremony was attended by the Minister of Foreign Affairs of Andorra, Maria Ubach, and the French Ambassador to Andorra, Cristina Rodríguez.

Emmanuel Macron expressed France’s support for the strategy and economic reforms in Andorra in the process of negotiating an association agreement with the European Union.

During his speech, the French President and co-Prince Andorra called on diplomats from different countries to develop and strengthen bilateral cooperation with the principality.