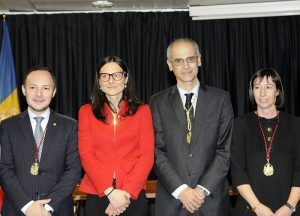 Eva Descarrega took office of the Minister of Public Affairs and Administrative Reforms of Andorra. Her former position of Secretary of State for Justice and Home Affairs and the Andorran Ambassador to Brussels took Ester Molné. Previously, she worked as a consultant to the Ministry of Justice, social and internal affairs, was a lawyer and a judge in civil cases and juvenile.

In his speech, Eva Descarrega said that her 20-year professional career in the public service will help to cope with two news objectives: the reform of government administration and police reform.

She also stated that she “intends to continue the work on simplification of administrative procedures and the implementation of e-governance”.