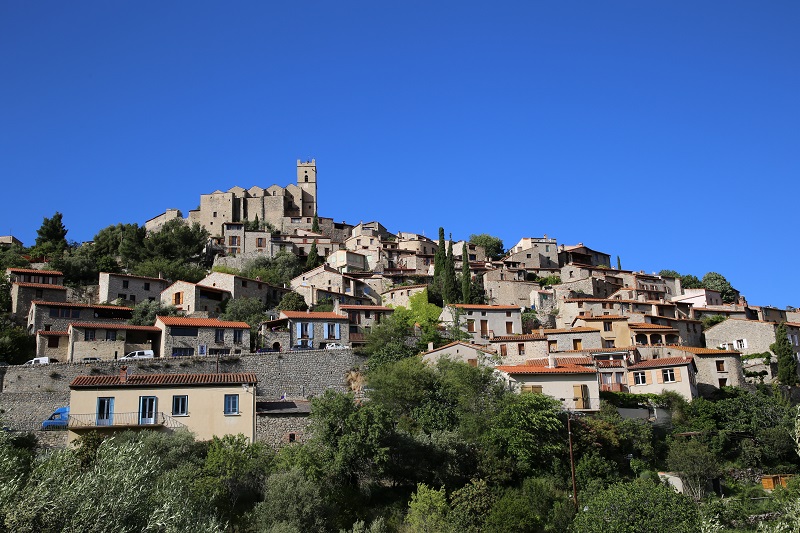 Eus village (fr. Eus) is the commune of the Eastern Pyrenees, included in the list of the most beautiful French villages. It is located between the Conflent valley and the Canigo Mountain.

The village’s distinctive feature is that it is the sunniest village in France. It holds the record for having the most sunny days per year due to its location on the Tet Valley’s southern side.

The village served as a defensive object for the French army in the 16th century, and it defended the French from Spanish troops in the 18th century.

The Saint Vincent church stands above the village, from which narrow streets, paved with pebbles, roll down. Flowers and evergreens lavishly decorate the village’s streets. All the houses are well maintained and renovated.

One of the village’s legends is about building a church on the old castle ruins.

It is said that in the past, rich people offered money to the poor villagers and the poor agreed and went to work. Women lifted huge heavy stones (the stones could weigh up to 150kg), and men laid out walls using these stones. Children lifted heavy baskets with soil.

However, they paid money to men only. Women and children received payments of vegetables and fruit and, more often than not, they weren’t fresh either. The women sorted the vegetables and fruit at home, used those that were already beginning to deteriorate, and the whole ones were sold at the market in Prades, the nearest major city. They bought new clothes or threads with the money they earned to repair old clothes of their many family members; the family had often from 10 to 14 children.

The village is a touristic place at any time of the year. There is a breathtaking panoramic view of the flowering peach trees in spring or the snow-covered peaks of Canigo in winter from the height of the city.

You can see plenty of artisan shops in the village’s pedestrian streets today, where you can buy jewellery, household decorations and art.

The population of the village is about 400 people.