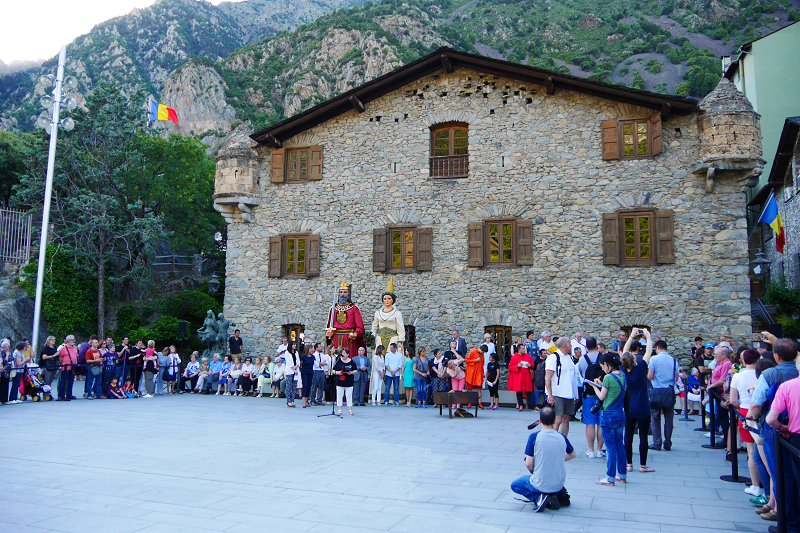 The Principality of Andorra is a small country that could be attributed to the group of European diminutive states together with Liechtenstein, Monaco and San-Marino. Alongside with that, Andorra is the biggest out of this group. The area of Andorra makes up 468 km2.

Location of Andorra: Andorra is located in the south-west of Eurasian continent, between Spain and France, in the eastern part of the Pyrenees. The country hasn’t got access to sea; it is mostly located on the mountainous terrain at the height of 900 meters above the sea level.

The official name of the country is the Principality of Andorra.  Nowadays Andorra has got a status of legal, democratic and socially independent country. On May, 14 of 1933 the referendum over the first Constitution was held. That Constitution was approved by the majority of the citizens. In accordance to this document a parliamentary principality was considered to be the basis of the state political regime. Form of government is a Parliamentary Principality.

Historically, Co-princes of Andorra as well as the Head of the State possess general and inseparable power and can represent the Principality at the highest level. In accordance to different versions of “Pariatge” decree the title of co-Princes of the State is personal and inseparable and belongs to Urgell bishop and to the President of France. In accordance to the same decree Urgell bishop and the President of France guarantee the stability of political system of Andorra. Co-Princes are also in a position to solve controversial issues of the Principality and participate in the process of taking decisions by the governmental and constitutive power.

Together with Lichtenstein and Monaco Andorra can be attributed to the so called European “tax heavens”. There is a light direct taxation in the Principality (income tax is only 10%, VAT – is 4.5%). Business taxation is the most liberal in Europe. From 2012 the profit tax for the companies makes up 10% with 8% of potential decrease.

Andorra is the only country of Europe which uses EURO as its official currency without formal agreement with EU. Andorra never had its own currency. Previously before the introduction of Euro Andorra used French franc and Spanish peseta.

In 2013 as a result of negotiations with European Union Andorra received the right to mint its own Euro coins. First amount of coins was produced in early 2014. In 2015, the second emission of Andorran Euro took place.

Due to the southern location of the country and its mountainous relief the climate may be considered mountainous sub-tropical, partially moderated by the Mediterranean Sea, located nearby. The temperature conditions of the country are more than comfortable for living. The temperature in January, the coldest month of the year, is -15C in the mountains and about 0C on the plain, ranging from -3C up to +3C. In summer the temperature may come up to +15C–+20C. Due to the mountainous terrain, relief diversity and abrupt elevation changes, the weather in Andorra is differentiated by zones and may notoriously differ within relatively small distances.

Climate of the of the country allows to cultivate tobacco  — a major crop of Andorra. There are small food industry enterprises (mostly, cheese producers) and also furniture factory. The rural dwellers are mostly occupied with sheep breeding.  Barley, rye, wheat,  oats, potatoes and grapes are cropped at the valleys and lower parts of the hills. The development of agricultural sector is limited because only 2% of the territory can be used as ploughed fields. The majority of agricultural products are imported.

The relief of Andorra may be considered typically mountainous with its swelling up peaks, escarping down cliffs, canyons, tumultuous mountain rivers, dodging through the mountains of the valley.  The relief of this part of the Pyrenees goes back to Paleozoic and Mesozoic eras. As for manifold lakes, being sources for manifold Andorran rivers, in accordance to the scientific data, they have glacial origin.

Officially, the level  of literacy in Andorra makes up 100%. Educational expenses make up 3,2% of GDP (as per 2017). There are 3 educational levels: elementary, secondary and higher education. Elementary and secondary educations are obligatory and free for Andorran citizens. 3 systems of preschool and school education are functioning in the country: French (3 300 people), Spanish (3 100 people) and Andorran (4 300 people). In accordance to the Statistics Department, the amount of pupils at the schools of Andorra in 2015 made up 10825. They study in Spanish, French and Catalan correspondingly. All schools are built and backed up by Andorran authorities, though the wages of teachers at French and Spanish schools are paid mostly by France and Spain correspondingly.

The state language of Andorra is Catalan (catala). Catalan is one of Romanic languages. It is spoken by the citizens of 4 countries: Andorra, Spain, France and Italy. On the territory of Spain it is Catalonia or Principate, a greater part of Valencia, Balearic Islands and a small stripe of land in the east of Aragon. In France it is Eastern Pyrenees department (Languedoc-Roussillon province), that is often called “Northern Catalonia”. Catalan is also spoken in Alger city (Sardinia, Italy). In Andorra Catalan has ever been a state language. The other languages in Andorra: Spanish, French, Portugues.

The code for international calls to Andorra: +376