The opening of the Carmen Thyssen museum will lead to many positive changes in Escaldes-Engordany and luxury boutique shops can finally appear nearby too, thinks the Mayor of Escaldes-Engordany’s town hall, Trini Marin • ALL ANDORRA 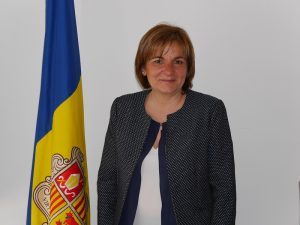 The Mayor of Escaldes-Engordany’s town hall, Trini Marin, told all-andorra.com about plans for the development of the district in the near future:

How much is Escaldes-Engordany administration’s investment budget for this year? How do these figures compare to last year?

The investment budget for this year is 27 million euros. Since 2012, the volume of investment has declined significantly due to the global economic crisis. The construction of new buildings was suspended. When I took office as mayor in 2012, the budget was 19 million euros. We had to partially reduce the financing of some projects. Over time, the situation began to change, and the volume of investments began to grow.

What would you say are Escaldes-Engordany’s most important investment projects?

One of the most important investment projects is the improvement of Avinguda del Fener. Much has already been done, but there is still a lot to be done.

We also are cooperating with Andorra la Vella to combine two pedestrian areas – Avinguda Carlemany (Escaldes district) and Avinguda Meritxell (Andorra la Vella), to create a single look for them both. The work should be completed by 2018.

There is another small project: we are beginning to reconstruct the communal pool, which was built about 30 years ago. The swimming pool will be closed for several months, so swimming courses for children at nearby schools in the spring and summer of this year will be cancelled.

As for projects for the future, I can name one private project that will take place which is for the construction of office buildings. In Escaldes there is an area near the hospital, which now serves as a car park. The owner of the land is Maria Reig; Escaldes’ town hall owns 15% of this project. The project is very important and expensive, therefore we will need to attract additional investors too.

What trends can be seen in the district in terms of architecture?

The urban plan of Escaldes requires change. It was approved in 2007, but I believe that this happened later than required. Therefore, in our district there are so many eclectic buildings. On the contrary, in Ordino, a single architectural style has been maintained.

Today it is absolutely clear that in Escaldes we need to make many changes in terms of architecture. First of all, concerning public places. The aim is to make Escaldes modern and dynamic.

What are the plans for the construction of new hotels (including five-star), luxury office buildings, and residential buildings?

The urban plan of Escaldes is currently going through the agreement stage. The final decision will be made by the government of Andorra. Then the plan will be returned to us, and we will begin its implementation. I hope this will happen no later than in a year.

How many tourists visit Escaldes?

Last year, the growth in the number of tourists to Andorra was about 4% (about 8 million people visited our country). On the main streets of Escaldes we installed monitors to make the data more accurate: thanks to Vivand shopping events, for example, about 6,800 people visited Escaldes in January-February.

Escaldes is known for its thermal springs. How many buildings are heated by thermal water?

The number of buildings in which thermal water flows through the pipes is about 90, including hotels and residential buildings. But for many years now, we have not used thermal water for heating. We use traditional sources – gasoil, as well as solar panels. The fact is in summer and winter the water temperature is so different. In summer it is about 68 degrees, and in winter it is much lower.

Are there any large plots of land for sale in Escaldes-Engordany? How much are they being sold for?

I can only name one site – this is a car park near the Carmen Thyssen museum. We want to buy it from the owner to build an office building. For now that’s all I can say.

Can you name the prices of the most expensive residential areas of Escaldes-Engordany?

One of the most expensive areas is Els Villars: there is always a lot of sun and a beautiful view. The Engolasters zone is less expensive. Anyway, real estate prices are not my area of expertise. As far as I know, they range from 6,000 € to 14,000 € for 1 sq. m.

Why are there so many areas of wasteland in the center of Escaldes?

These are mainly private properties. The City Hall does not have the powers to intervene.

On one of these pieces of land, near Prat del Roure, we decided to build a car park, which has 120 spaces. I would not call this project unprofitable – after all, we didn’t invest much in it. We have leased this land for a period of 4 years. After this period is over, we will calculate the return on investment and will decide whether to continue or not.

What are Escaldes-Engordany’s main cultural and sports activities scheduled for 2017?

The most important cultural project of this year is the opening of Carmen Thyssen’s museum. This event is not only important for our district, where the museum is located, but also for the whole country. I am sure that the opening of Carmen Thyssen’s museum will lead to many positive changes in Escaldes-Engordany, in particular, luxury boutique shops can finally appear nearby too.

For the moment, the Escaldes tourist area is a kind of “triangle”: it is formed by the CIAM (the Center d’interpretació de l’aigua), Carmen Thyssen’s Museum and the Center of Art.

It is worth noting that at the beginning CIAM was a very popular museum – the third most visited in Andorra. Now the concept has changed. The government has decided to organize an exhibition space here for a period of 3-4 years instead.

Traditionally, we have quite a lot of cultural events. Among them – the festival “Colors of Music” in the square la Plaça Coprinceps (international summer music festival) and the New Year’s Gospel concert.

Finally, we also have a lot of sporting events – both for children and adults. Some of the next races include; race Purito (la Purito) for children, the sports race “Esport per tothom” (“Sport for all”), women’s race, and the night race. Every time, every year, the number of participants grows.

This year in Andorra we will hold one of the stages of the Vuelta 2017 competition (La Vuelta 2017). On 22nd August bikers leave Escaldes and go to Tarragona.

I would also like to note that Escaldes was the first district to offer sports and entertainment for children during summer holidays. We cater for children under 16 years old. These classes are also available during the seasonal school holidays.

I would also like to note that Escaldes was the first district to offer sports and entertainment for children during summer holidays. We invite children under 16 years old. These classes are also available during the seasonal school holidays.

I am a supporter of independence, but, above all, I am a democrat, says Mayor of Solsona, David Rodriguez Gonzalez

Pamplona is not only the tourist city of Spain, famous for its Sant Fermí celebration, it is also the largest centre for biomedical research, says the mayor of the city Enrique Maya

According to the Economic Activity Index, Zaragoza is the fourth city in Spain, said Zaragoza Mayor Jorge Azcón