Blixa Brargeld about the latest Einstürzende Neubauten record “Alles in Allem”, ways of working with crowdfunding model, his approach in writing song lyrics and strict restrictions in German junkyards

Few bands with 40 years history can say that they managed to keep their true spirit and real passion for pushing the envelope with their musical innovations and experiments. Einstürzende Neubauten can be for sure characterized as this kind of band. Formed in 1980 in West Berlin by Blixa Bargeld, Einstürzende Neubauten played a serious role in the rapidly developing industrial music scene of the 80s. Their first albums were a perfect example of an uncompromising and avant-garde approach in making music. The band got known for their aggressive and cacophony sound which was shaped with the help of self-made instruments made out of scrap metal, building tools, shopping carts and other industrial objects.

Throughout the 80s Einstürzende Neubauten continued experiments with their rough, industrial sound. The band’s music started to change noticeably in 1993 when they released the album “Tabula Rasa” in which their sound was much more soft, gentle and electronic, then it was on their previous records. At some point there was a feeling that Einstürzende Neubauten breaked up with their rebel roots and moved to a more establishment side of the musical business—they changed their punk and gothic outfits to elegant, classic suits, started to do soundtracks for theatre plays and went to support U2 on their European Tour. But the rebel roots were still there and were vividly demonstrated when Einstutzende Neubauten was thrown off their supporting U2 European tour after the band had a misunderstanding with the booing audience, which ended up with throwing things at each other.

Einstürzende Neubauten are known not only as one of the biggest sound innovators in modern music, but also as the inventors of a new form of funding recordings directly by fans, without any record companies taking part in the production process. This new way of funding, that is widely used by different musicians in nowadays and is called now “crowdfunding,” was invented by Blixa Bargeld’s wife Erin Zhu. This model was first time successfully tested on the album “Supporter Album No 1”, since that moment Einstürzende Neubauten had become a truly, not only on words, independent band—a musical collective that manages to do all their production on their own, only with the help of the fans, without any record label being involved.

We had a chance to talk with Blixa Bargeld during his quarantine in Berlin about the last Einstürzende Neubauten record “Alles in Allem” that is going to be released on 15 of May, his approach on working on song lyrics, creative ways of doing the new album, the bad impact of the pandemic situation on the musical industry and other important things.

Hello Blixa! Thank you very much for finding time for us, it’s a big honour. The new Einstürzende Neubauten record ” Alles in Allem” is going to be released soon. Was it a long way from the starting point when the first idea of the album came to you till finishing the record?

I didn’t know and planned that we were going to have a new album. At the beginning of 2019 I came back from Hong-Kong to Berlin and was having a jet lag. I couldn’t sleep and in the middle of the night I decided that I should make another record. Then I asked the band if they wanted to make the record, and they were ok about it.

My wife helped organize the crowdfunding campaign on the platform, Patreon. She was particularly good at doing this as she is the inventor of crowdfunding. We collected funds for 100 days of recording, which lasted over the year. This is how the album was made technically with the help of his support model and the crowning end for the crowdfunding participants supposed to be a special show in Berlin on April 20 and several other events in art galleries, a bus tour through best Berlin sites that I was going to conduct and a listening session of the album in our studio. 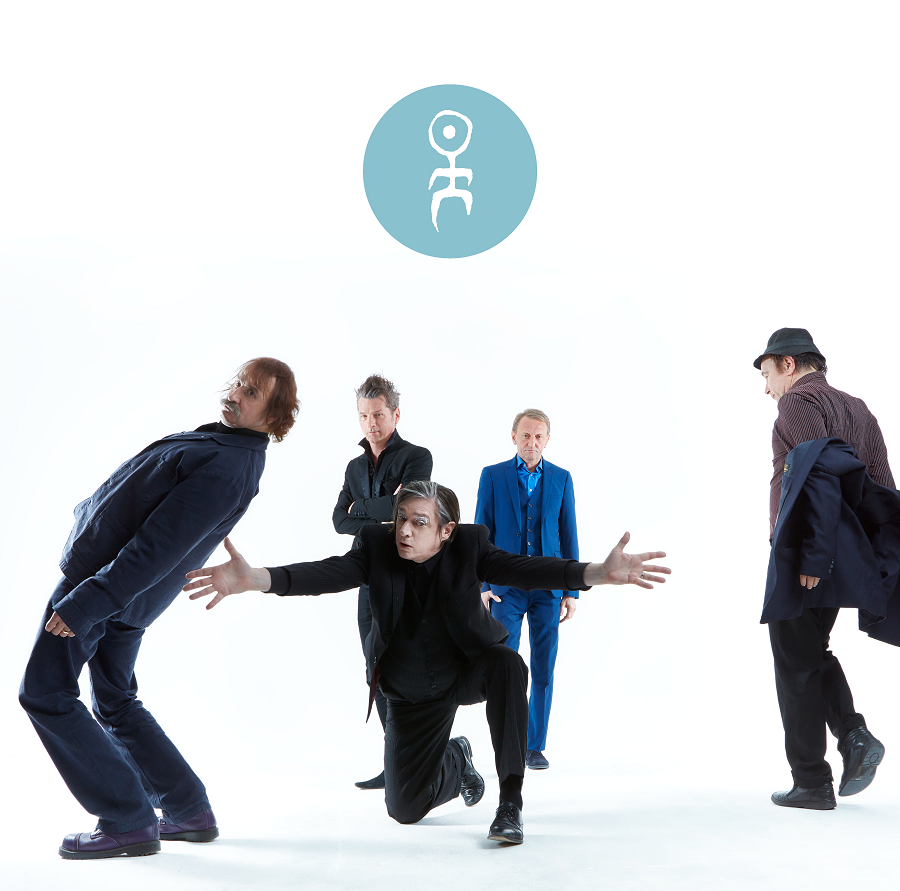 Probably, because of the pandemic, all these events are postponed now?

They are not postponed; it looks like they are cancelled. Concerts are forbidden in Berlin till April 19, but nobody believes that situation will change and that we will be able to have a show on April 20 and actually I personally don’t believe that there will any kind of shows till the end of the year in Germany either and it seems that the American tour that was in plan will be cancelled too.

The only thing that stays unchanged is that the album “Alles in Allem” will be released on May 15. There will also be a special deluxe edition, with two discs—one CD and one DVD with all the webcams sessions from our studio recordings that we did for our crowdfunding supporters and a book with the song lyrics.

This crowdfunding method you use for collecting funds for making the record is a wide used practice now. But probably Einstürzende Neubauten back in the days were the pioneers of this approach?

Yes, my wife back in 2002 was the first who came up with the idea of funding this way musical projects. We used to call it originally—the supporter system, in our days it is called crowdfunding.

Do you think this is a workable model for many artists?

Well, it’s not workable for everybody, but it is workable for us in the way we invented this approach—with not just asking fans money for making a new album, but with giving them for this money some bonuses like special record release events and insides of the working process, so they can see the hall process in which they participate right from the beginning..

When we started live studio session broadcasts for our supporters back in 2002, the technologies weren’t really there. We had little plastic cameras and had to put a lot of cables to make the streaming, we had a cable hanging through a courtyard and a lot of USB cables for putting everything together and to make the things work… Now streaming is a completely normal thing; everybody knows what it is and can make it in acceptable quality—if you will compare it to the quality of first direct streams of studio recordings for the album “Perpetuum Mobile” that we did in 2004—they look really vintage now.

Does the fact that the decision of making a new album came so suddenly and was an unplanned one, means that you were wanting to put on hold all activities with Einstürzende Neubauten for a while?

No, we have been busy with the band recently, we were touring. It was not about the end of the band. But if we talk about a new album, I really need to feel that it is in me and that I have a need for making a record happen. I must feel this need inside, this is the way I work, I can’t just go without this feeling to the studio and record a bunch of songs.

Einstürzende Neubauten used to have great musical videos. Any plans for doing some videos for the songs from “Alles in Allem”?

Well, at the time when we had such memorable videos as “Sabrina”, there were record companies and the record industry working in its traditional way when these companies were giving budgets for shooting videos. But this way of doing things doesn’t exist anymore; this is why we don’t do many videos these days.

But there will be one video for the song “10 Gram Goldie” from the new album. It will be released as a single in audio and video version on April 1 on a new streaming platform that we are working on, that will represent all our back catalogue. We will also release a month later through this streaming platform another single from the album “Alles in Allem” and later two bonus tracks that will be only on deluxe edition as well.

Einstürzende Neubauten are known as great sound innovators. They search for unique sounds using different custom-built instruments made from different industrial objects like scrap metal and building tools. Will there be some surprising sound innovations on the new album?

Normally, when we start a record, we go on an expedition to a junkyard. But the laws in Germany have changed now; they don’t let you go to the junkyards anymore. It is a real problem. Last time, after researching possibilities and a lot of phone calls, we found only one junkyard that was ready to let us in. But when we were there they didn’t let us get to the good stuff that they had, that could be useful for creating our sound objects. They let us only to the pile of trash. That was a bit frustrating.

There was only one sound innovation with using fabric bags as a sound object. I’ve actually had this idea for a few years and now realize it. In everything else we just had to rely on our experience as musicians.

Your lyrics are always the strong and serious part of Einstürzende Neubauten songs. Do you write them quickly in a moment of inspiration or does it take you a long time to shape and polish to finally get a perfect piece of poetry?

My duty is to make some notes every day. Actually, in the deluxe edition of “Alles in Allem” there will be a 100-page book with all my notes connected to the album, from first notes to the developed songs. I am not a fast writer. I can write one sentence and the next one can come a week later; usually, creating a song lyric takes a long period of time.

Are there any poets that really influence you?

Not much, maybe only Bertold Brecht.

Are you involved in some other musical projects besides Einstürzende Neubauten?

I do some music together with Teho Teardo.

But everything is frozen now. I am quarantined in Berlin now, and the only thing I can confirm is the release of “Alles in Allem” on May 15.

What is your feeling with this pandemic situation that we are observing in the world and how do you fulfil your days during quarantine?

I personally have a lot of free time because of the quarantine, and so I have started to do special quarantine time video blogs three times a week.

Blixa, we wish you to stay strong in this hard time. Hope this crazy situation will be over soon and we will be able to see Einstürzende Neubauten touring in full with their new album. Thank you very much for the interesting chat.