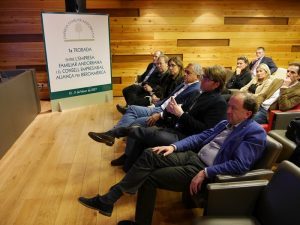 On 10th February, Minister of Finance of Andorra Jordi Cinca welcomed the delegation of Business Council Alliance of Latin America (CEAPI). He spoke about the reforms, their consequences and the future plans for the promotion of Andorra in the international market.

In particular, the Minister spoke about the evolution of Andorra, its economic sphere, the effects of the economic crisis, which provoked a lot of difficulties because of lack of diversification of the economic model, as well as the fact that “the world began to press on countries that have not been recognized in the world market.” The Minister also noted that the transparency of the economic model was accompanied by guarantees that the Andorran companies will be able to work at the international level.

EFA Secretary Joan Thomas noted that the culture of Latin America in many ways similar to the culture of Andorra, and this fact can lead to synergies in the business.

Agensa of CEAPI to Andorra was continued on Saturday by a visit to the ski resort “Grandvalira” and lecture  of Director of the “Institut d’Estudis Andorrans” Jordi Guillamet about the history of Andorra.