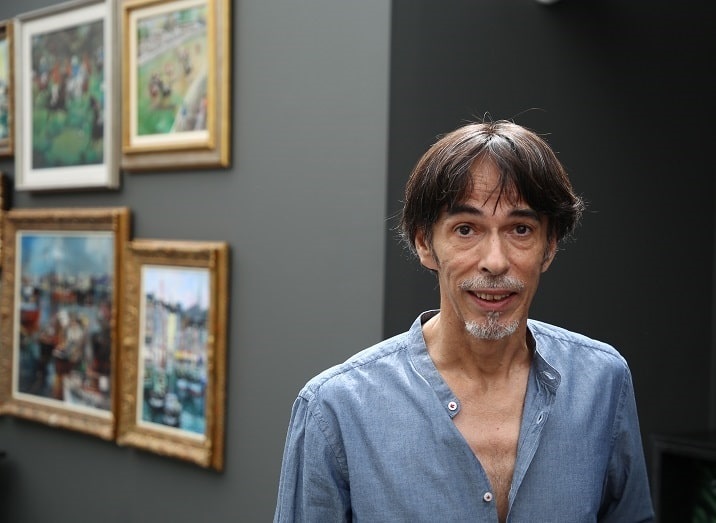 We spoke with Gil Roman, artistic director of Béjart Ballet Lausanne, about the role of art in our life, his point of view on the development of modern ballet and his ambitions for the future.

Gil Roman began his professional career in Montpellier at the age of seven. He studied at the “Princess Grace Academy of Monte-Carlo”, before joining the Center International de Cannes. In 1979 he joined Maurice Béjart’s Ballet du XXe siècle.

In 1993, Gil Roman became deputy director of the Béjart Ballet Lausanne. In 2007 he succeeded Maurice Béjart. In 2014, the Vaud Culture Foundation awarded him its Outreach Prize.

It is indeed quite complicated. The situation is difficult for everyone, economically and humanly, and it touches me deeply. The work we do is not outside society. I think that the culture, and especially dance and music, exists without borders. The culture is here for us to share our humanity. In such difficult times, when the world closes in on itself and each country closes in on itself, culture is the only possible way to change it…

Do you feel this negative effect?

Sure. We can no longer have performances in Russia, we can no longer do certain things. Our economic situation is difficult, the Company is semi-public and semi-private.

The current situation affects all of us. It makes me deeply sad. At the same time, I think we must fight, we must share our positive energy with others because we are all human, despite our differences, our borders, our nationalities.

What do you think of the evolution of the ballet in general?

That’s a difficult question. Currently, there is an evolution in all directions. Everything is open, everything is possible. The dance will always exist if we don’t close ourselves up in a small chapel, if the dance is generous, if the dance reaches out to people. We have to avoid confinement and retroversion. We have to go for change.

In your opinion, what are the current trends in the evolution of ballet?

There are several different trends. It’s always like that in dancing. There is nothing new. There are always moments of expansion and moments of contraction. At the same time, a dance doesn´t have to enclose a dancer, to put him in prison. This is the direction I want to go towards, independently of fashions and currents. Because dance is both one and multiple at the same time.

Today, the Béjart Ballet Lausanne is a world-famous brand. What are its strengths?

It´s a Company based on classical techniques which transform things into today’s reality. Ballets can be born and die. I worked on different choreographies, we danced all over the world. Sometimes the ballet tells you that it no longer corresponds to the present era. The strength of the Company is that it always tries to share emotions, to reach out to the people, that’s what I believe we do along the same lines as Maurice did. The target is always to have something to say. This is perhaps what makes the difference.

Maurice Béjart, in particular, is known as the creator of the new European dance paradigm. But who is he personally for you?

I entered the Company when I was 19 and I am 62 today. So I have spent my whole life by his side. I joined this Company because at that time boys or men no longer existed on the stage. There was a period of dance, when men were behind. And in my youth the only choreographer who valued male dancers was Maurice.

Then he developed my dancing. I worked with him in various directions. It was very difficult for me, but I chose him as my master, and he chose me. He loved me, I loved him. I absorbed all that I could. And today I work as a choreographer and at the same time I rework Maurice´s choreography to transmit his spirit. He still surprises me, and my love for him… I mean, I think of Maurice every day. I live with Maurice, even if he is no longer there, through his ballets. I don’t know if I can explain it to you better.

What is your strongest impression in the history of your professional career?

It’s Maurice. He made my career. Every time it was an adventure, adventure and adventure once again.

Technique is very important for ballet. This requires enormous concentration. But it is more important to be able to overcome fatigue, physical pain. What character traits help the most in ballet?

It’s like in all professions – it’s a desire to do well. Anyone, even someone who is not in the front line, but who works and has the desire, can become a good dancer. Everything depends on his will and his mind. Obviously, I think that working from 5 a.m. in a factory is more tiring than dancing. But you must do your job or give up. You must do it with passion. One day, when the passion is no longer there, you will have to change your job.

No. I’ve always admired great Russian dancers, but it’s not so simple. It depends a lot on the individual, on the person who dances. It depends on the artist. There are no schools to produce talent, but there are schools to learn to dance. But having talent… It’s something that comes from elsewhere.

What is at the heart of your professional career? Love for dancing? Your ambitions? Your vision? Your ability to explain and teach?

It’s a bit of all that. And it depends on age. When I was young I had terribly high ambitions. Little by little I took the blows, my work gave me a sense of humility. There’s a part of me that’s still the same. I had moments of ambition, I had moments when I only thought of myself. Little by little I reached out towards people and started sharing what I had learned. It’s a mix, all of that makes a life journey.

Every year, under your leadership, some new performances are held, which brings great pleasure to the world community. What is planned for this year?

This year I have planned a ballet created in 1983, “Wien, Wien, nur du allein”, which lasts 2h30. It portrays a situation where 14 people are locked in a bunker and bombed. I used the time we had during Covid to start working on it. I will present it with new decor, exactly in Maurice’s style of choreography, next December in Lausanne. This is the main goal for me right now.