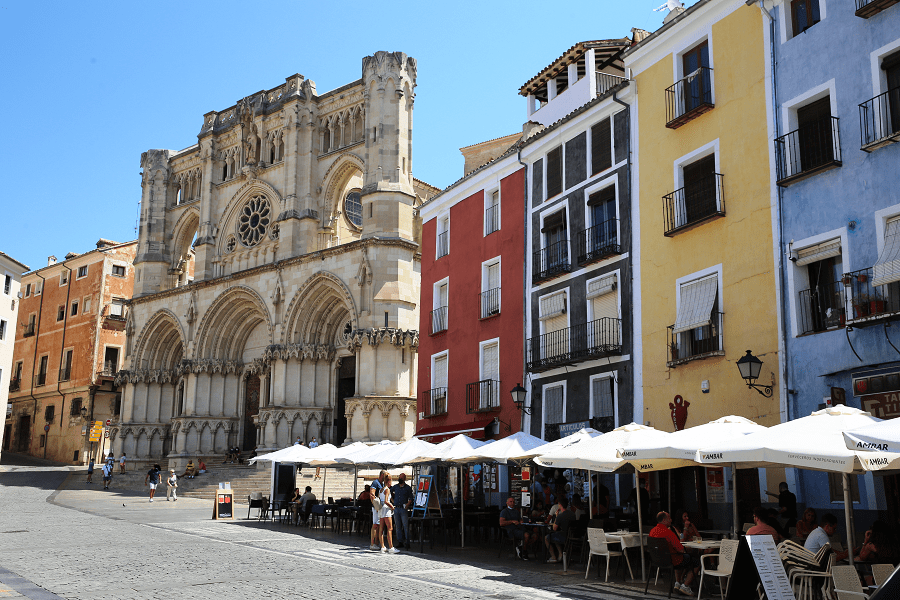 Cuenca is a municipality belonging to the autonomous community of Castilla-La Mancha and a city, capital of the homonymous province (Spain).

In 1996, the «Historic walled city of Cuenca» was declared a World Heritage City by UNESCO, with the following places: 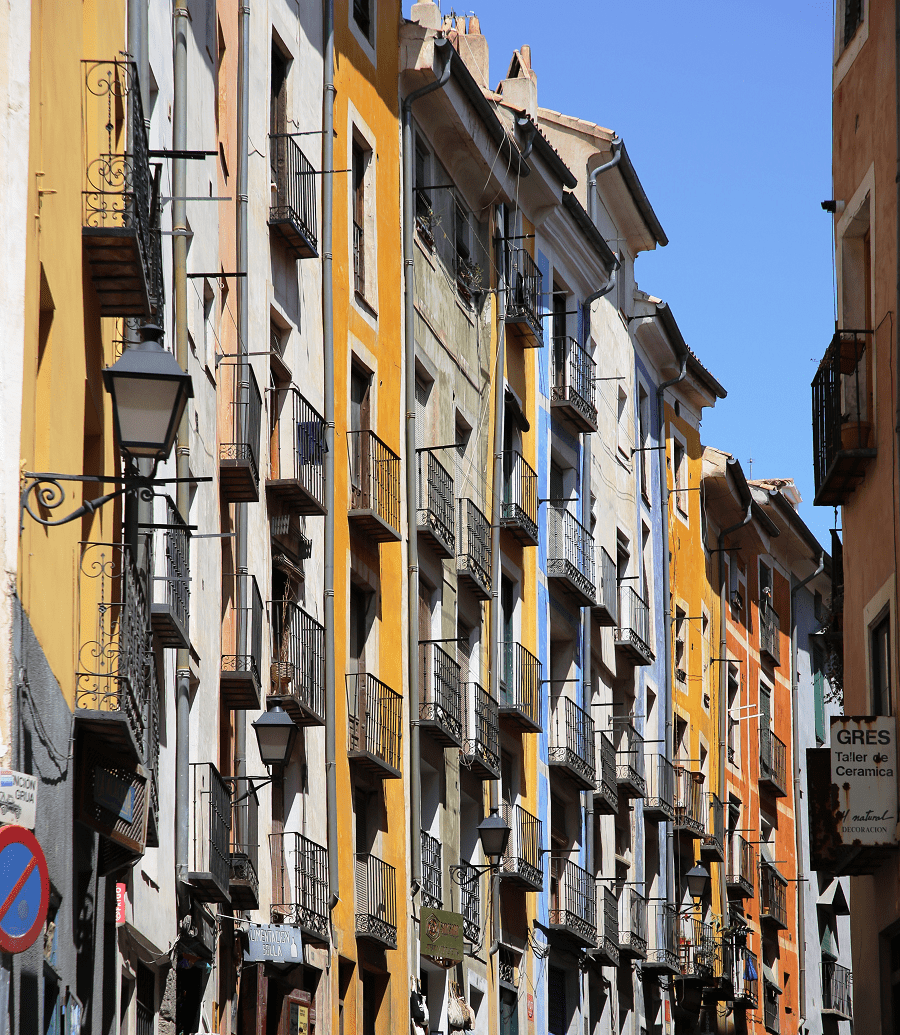 The city of Cuenca originated around the 8th century around the Andalusian fortress of Qūnka, which occupies approximately the space of the current castle. This fortress was located at the point where the gorges of Júcar and Huécar narrow the most, creating a small peninsula where the urban nucleus was developed. The Andalusian medina was formed in the space between said citadel and the fortress, which encompassed the spaces of the current Plaza de Mangana, the convent of La Merced, the seminary and part of Calle de Alfonso VIII. 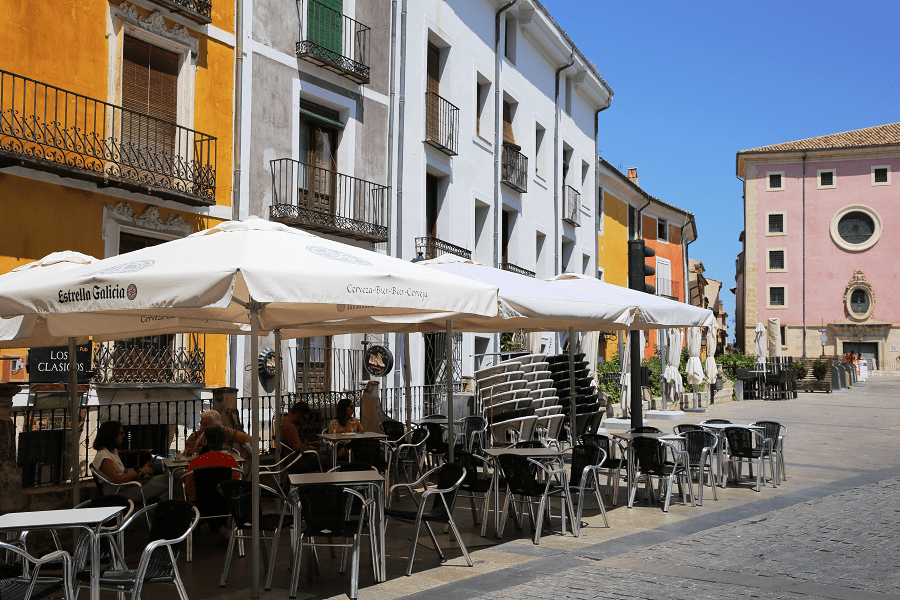 One of the main areas of the city is its Plaza Mayor, located in the center of the longitudinal axis that runs through the old city, of which it is the nerve center. It has a slight triangular shape and its limits are marked by the cathedral, the town hall and the convent of Las Petras. It did not become the main square of the Christian city until the 15th century, when it replaced the Plaza del Carmen (then de la Picota) in their functions of meeting of the Council. 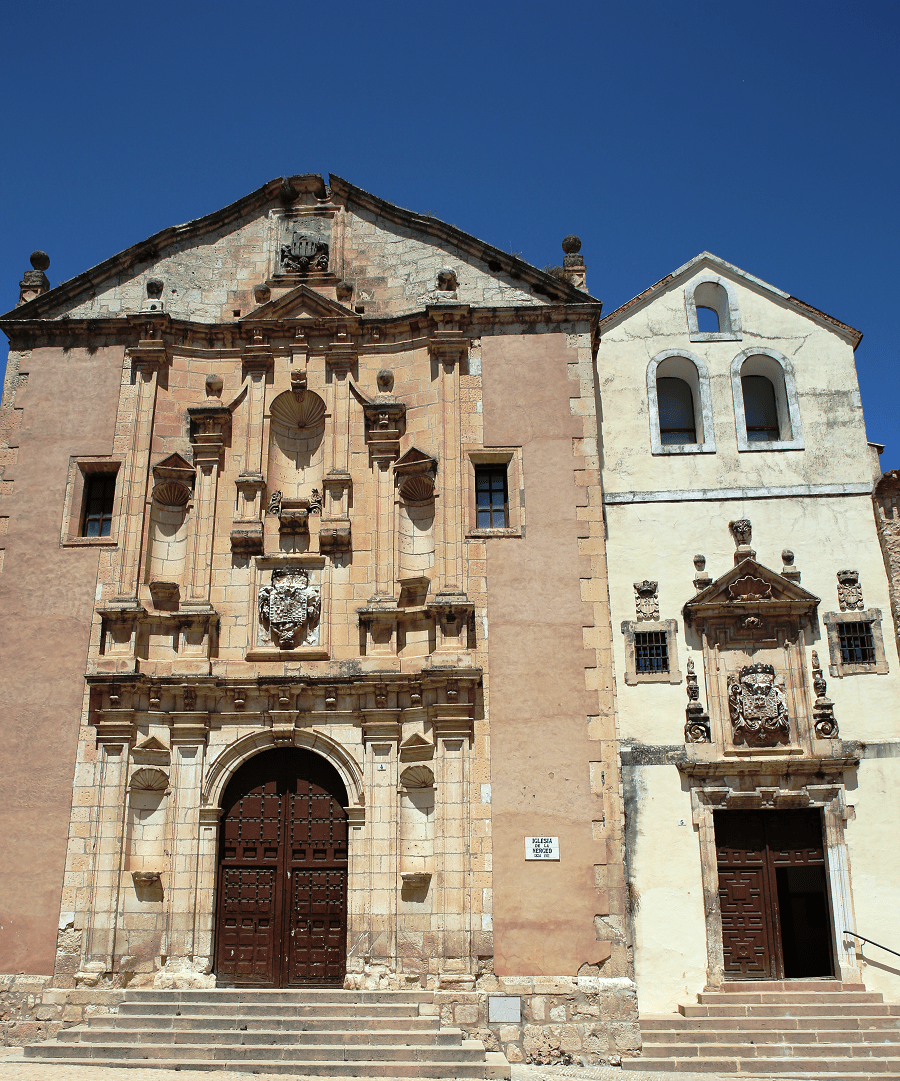 The Mangana square occupies the site of the old fortress and in it are the Mangana tower and the Monument to the Constitution of Gustavo Torner. It has been the object of important archaeological campaigns until the end of 2010. The main remains that will be integrated into the building are those of the old fortress, a synagogue and the church of Santa María de Gracia. 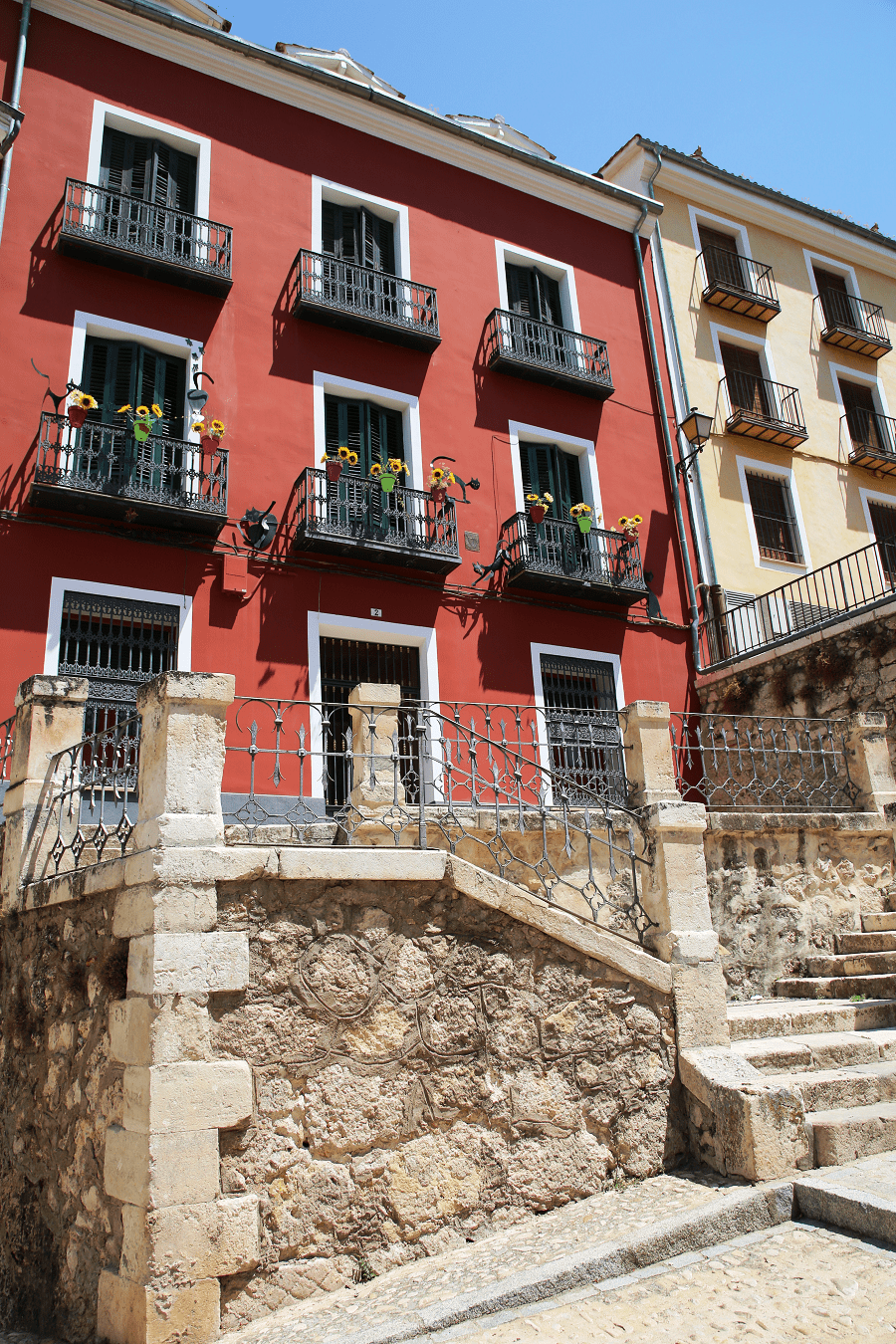 Cuenca Cathedral is a Gothic cathedral – one of the earliest Spanish examples of Gothic architecture, built at a time when the Romanesque style predominated in the Iberian Peninsula. In particular, the cathedral is characteristic of the Norman and Anglo-Norman architecture of the 12th century, of which Soissons Cathedral, Laon Cathedral and Notre-Dame de Paris are representative examples. The cathedral is the seat of the Roman Catholic Diocese of Cuenca. It is dedicated to Mary and to Saint Julian of Cuenca, the second bishop of the Diocese and patron saint of the city. 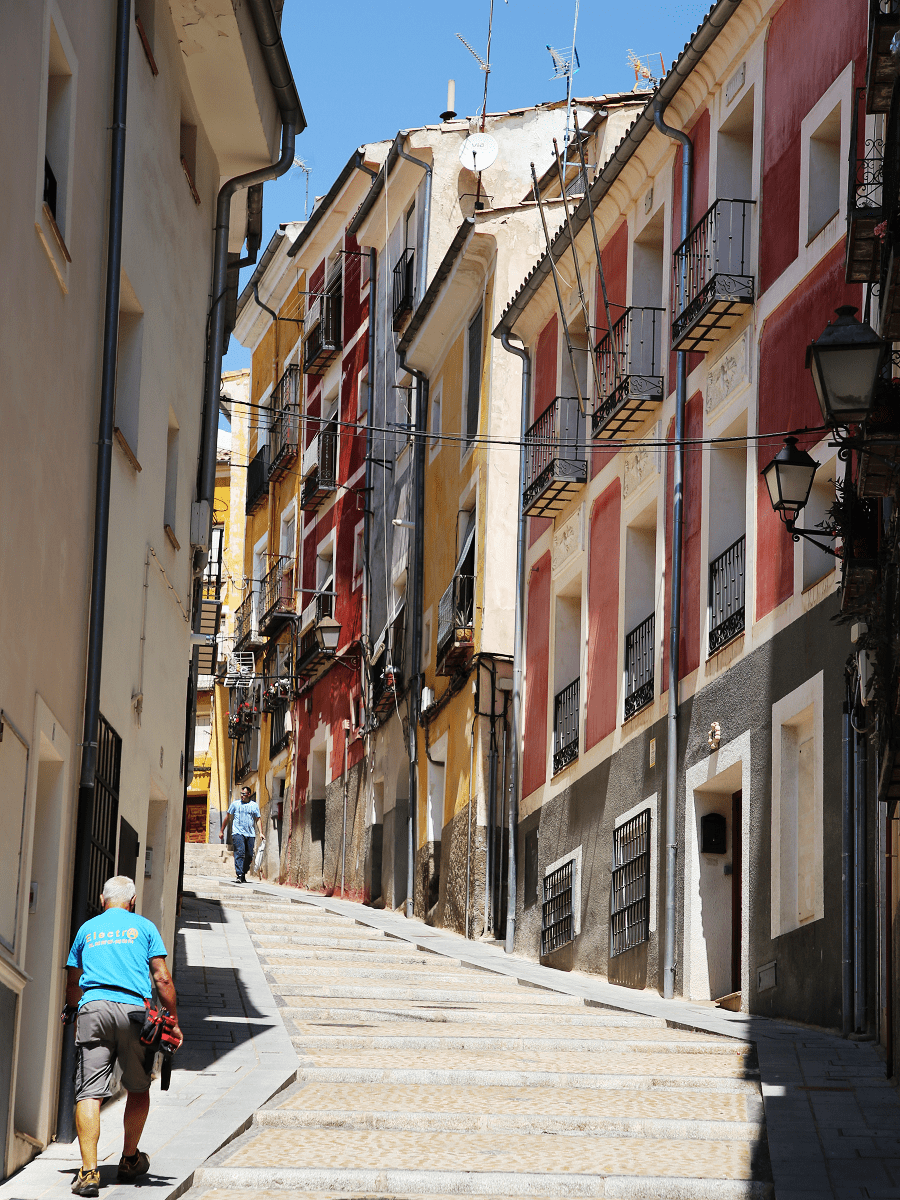 With Romanesque origins, the church of St. Peter (San Pedro in Spanish) was rebuilt by Jose Martin de la Aldehuela during the 18th century and displays since that time a Baroque façade. It shows an octagonal shape outdoors but it is circular inside, and it is located at Plaza del Trabuco. 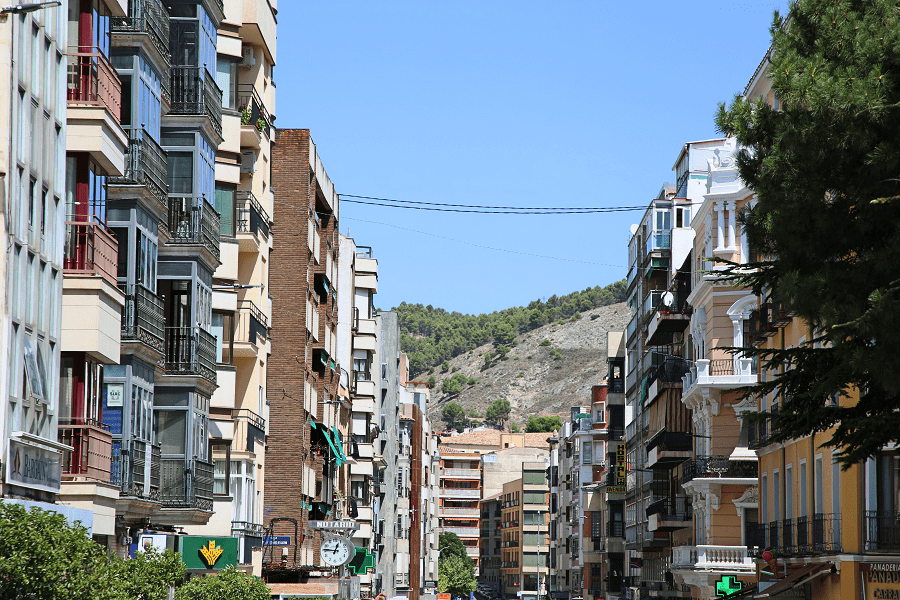 The bishop’s palace features, on three of its museums, the Diocese’s Museum, which has a remarkable collection of religious art. It can be easily accessed from the cathedral. 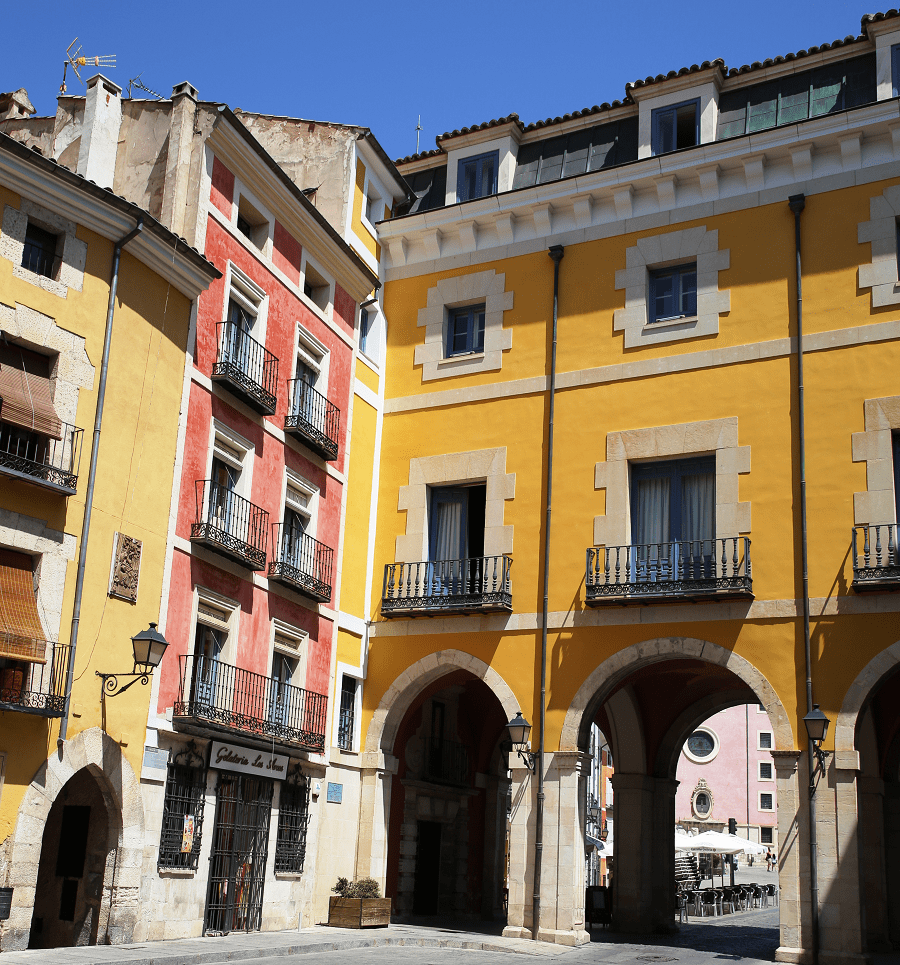 The Church of Saint Michael (Iglesia de San Miguel in Spanish) was erected during the 13th Century, with only one nave and an apse. In the 15th Century, a second nave at the north side was added. The dome was built by Esteban Jamete in the 16th Century, and finally the wooden ceiling of the two naves was replaced with stone vaults during the 18th Century. 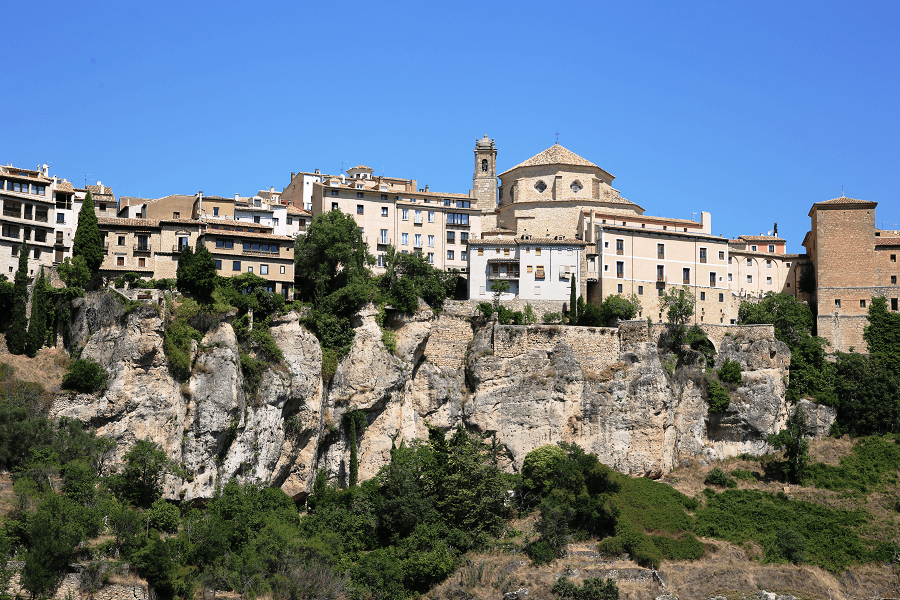 The convent of Saint Paul was built in the 16th century by command of the canon priest Juan del Pozo, a monk belonging to the Dominican Order. Brothers Juan and Pedro de Alviz were in charge of the building project; Pedro worked on the convent and the cloister and Juan on the church. 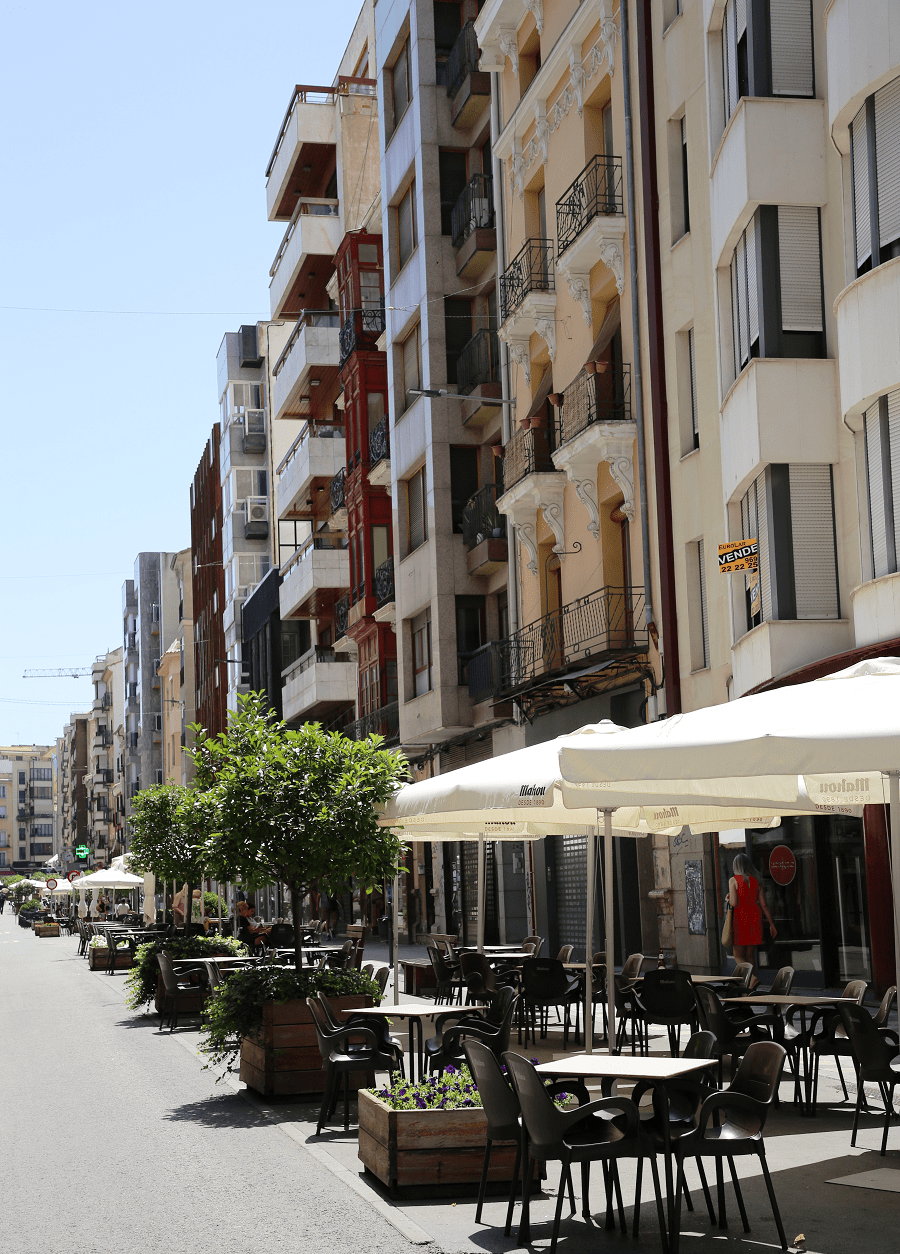 El Castillo is the name for the remains of an ancient Arab fortress, representing the older structures of Cuenca. Only a tower, two stone blocks, the arch which allows to enter/leave the old town from the Barrio del Castillo and a fragment of the walls have been left. 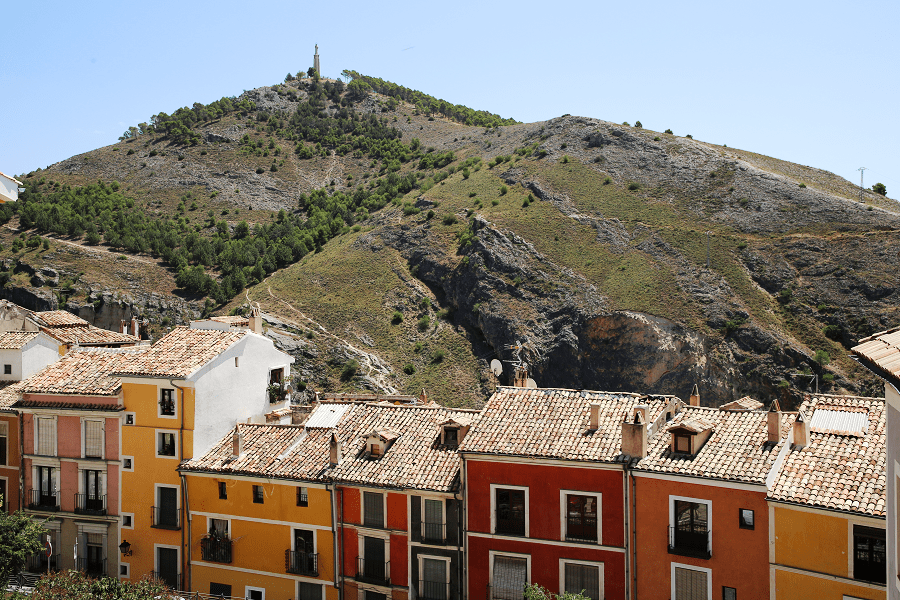 The origins of the Mangana Tower remain unclear. In 1565 it was painted by Anton van den Wyngaerde, which indicates that at that time Mangana had already been built up, and after the attacks by French soldiers during the Spanish War of Independence war – at the beginning of the 19th century – and having been hit previously by a thunderbolt in the 18th century, it became badly destroyed. Mangana Tower was rebuilt by Fernando Alcántara in Neomudejar style – inspired on Arab decorative motifs – in 1926. Finally Victor Caballero gave Mangana its current look in a fortress-like style in 1968. 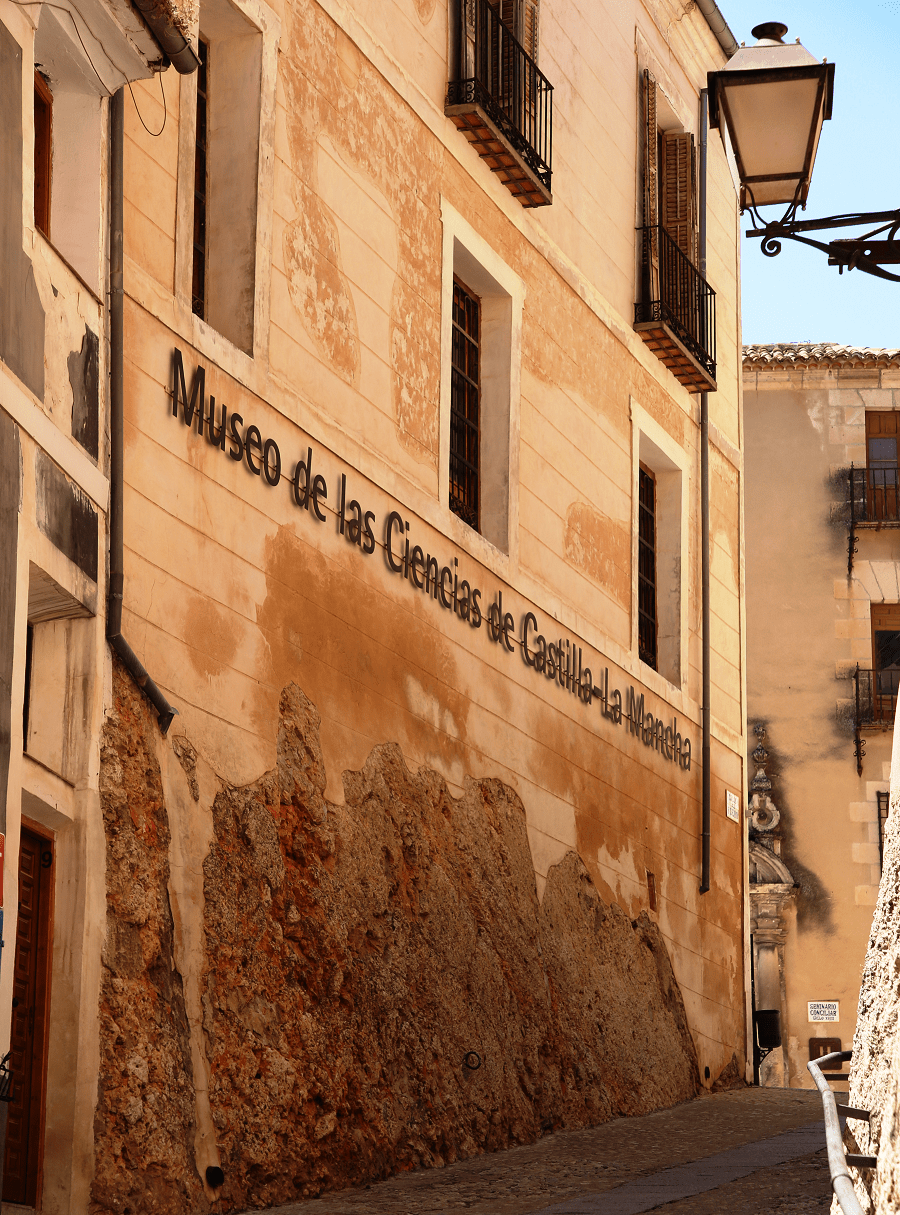 The Town Hall is a building in baroque style built up during the ruling period of King Carlos III and supported over three Roman arches. It was finished in 1762, as it can be read on the façade. 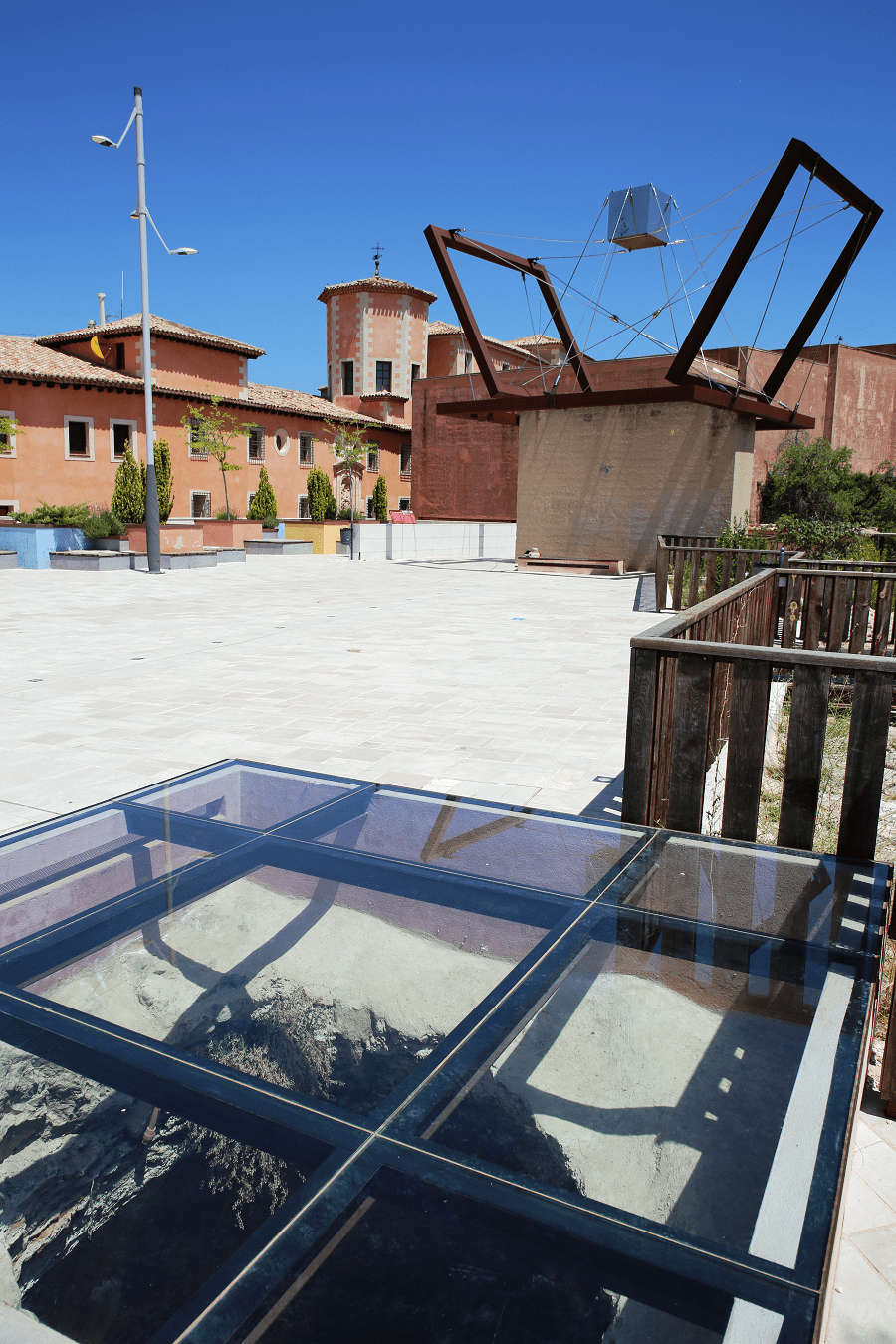 Built over a rock above the Huecar River gorge in the 15th century, Las Casas Colgadas are the only remaining samples of this type of building which was common in this city a long time ago. Hanging Houses can be considered the most famous civil buildings in Cuenca. They house a restaurant and the Museum of Abstract Arts and they serve as the background of millions of photos made from the bridge of San Pablo. 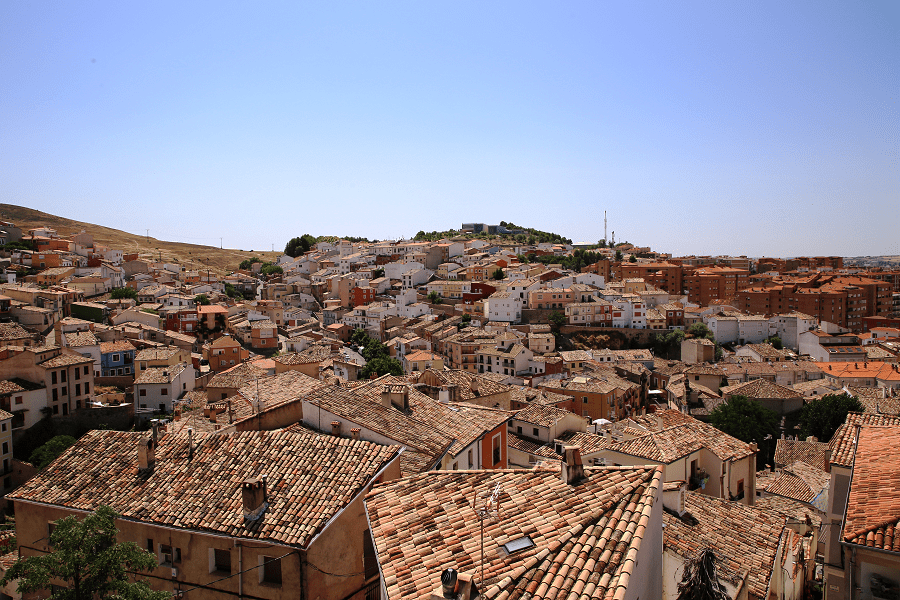 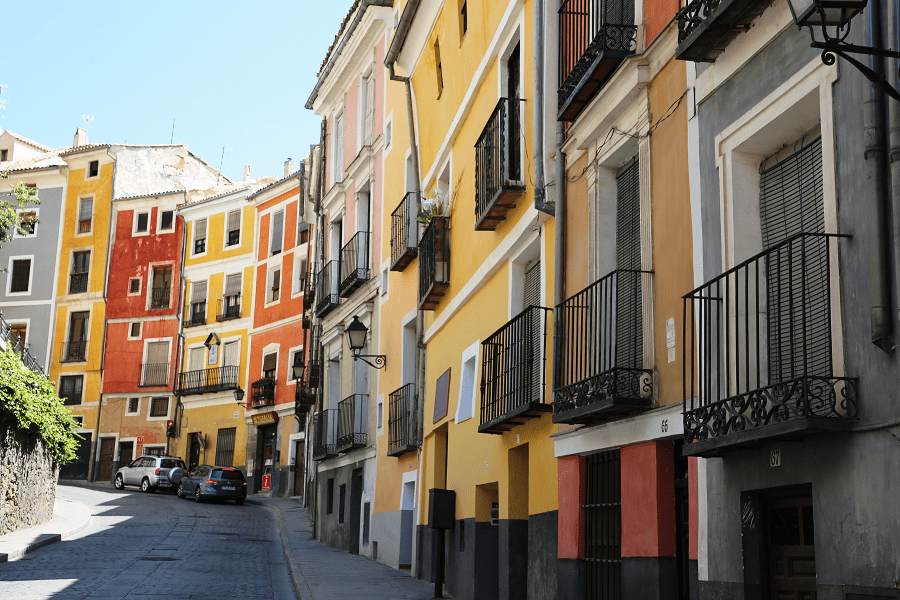 There are stores with unique fashions and international brands such as Zara, Benetton, Mango, Bershka. But, above all, you will find a great number of shoe shops due to Cuenca’s close proximity to Valencia and Alicante, two of the most important textile and footwear industrial zones.

All over the “Old City” area you will be able to find small craft shops. There are also shops in the museums with great variety of artistic objects. 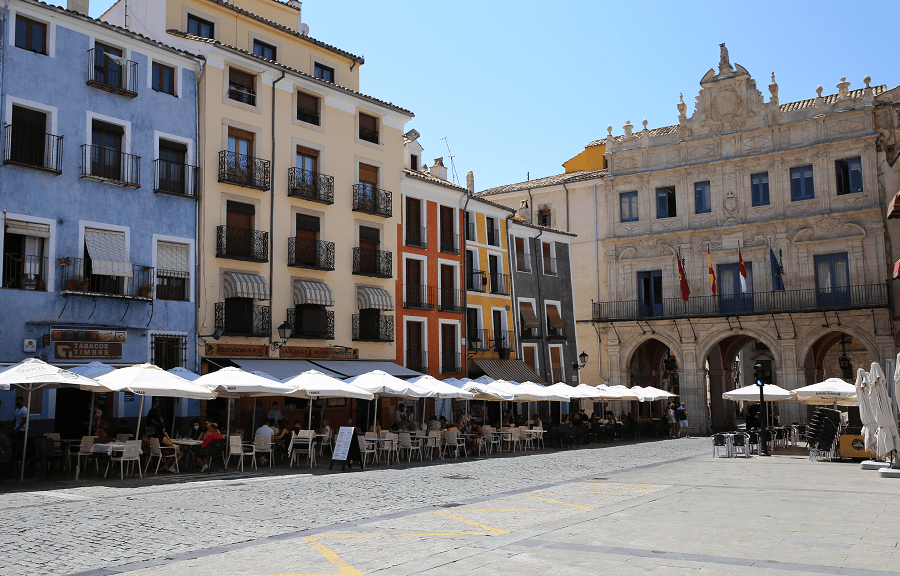 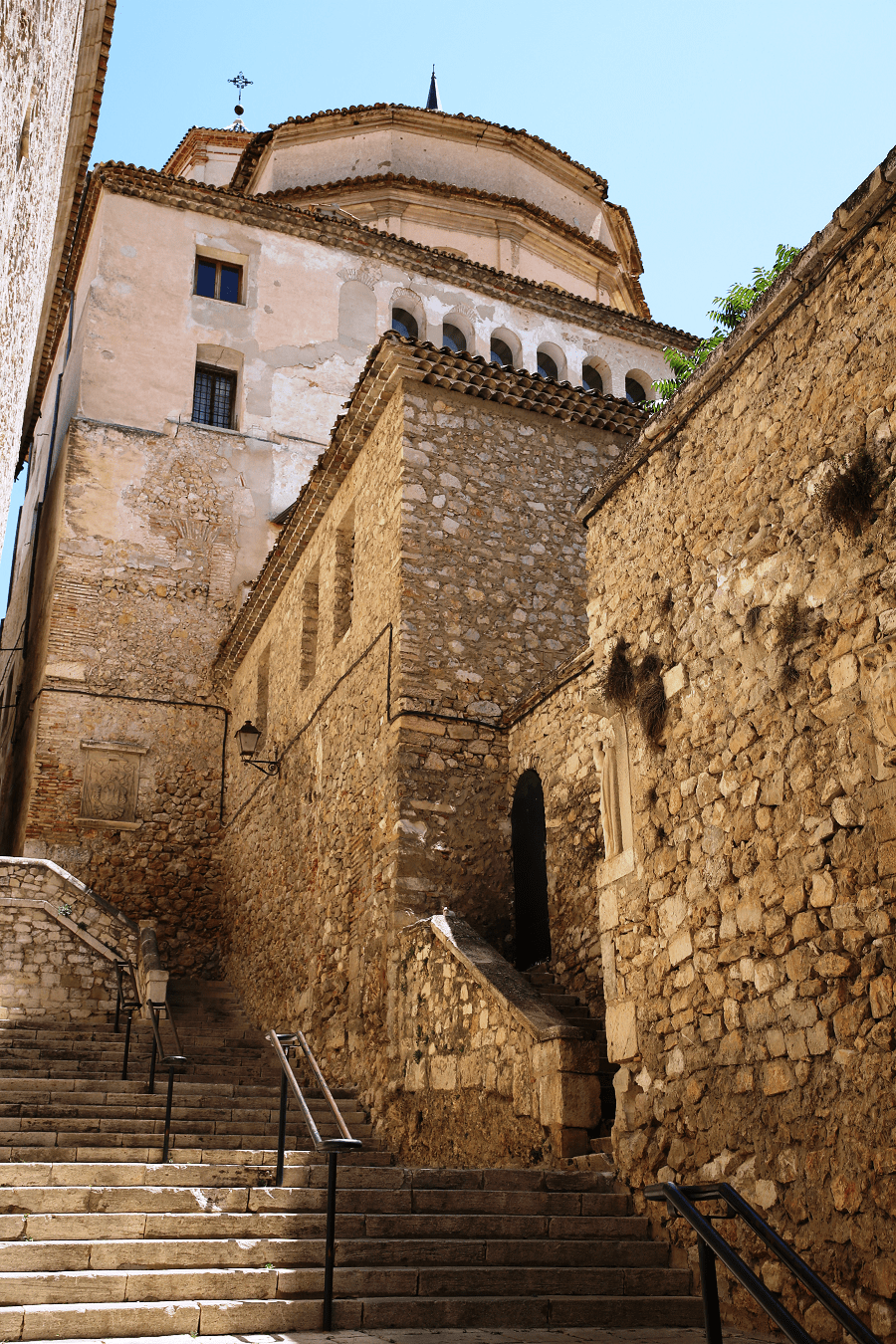 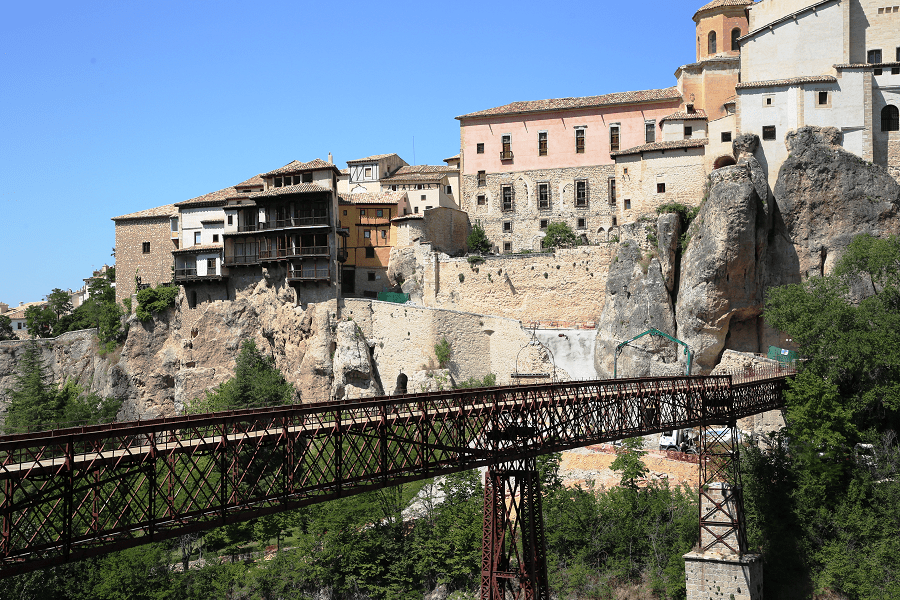 The city is served by the Cuenca railway station. A new AVE (high-speed rail) link (50 minutes from Madrid) was established between Madrid and Valencia.

Distances to the main cities of Castilla-La Mancha: 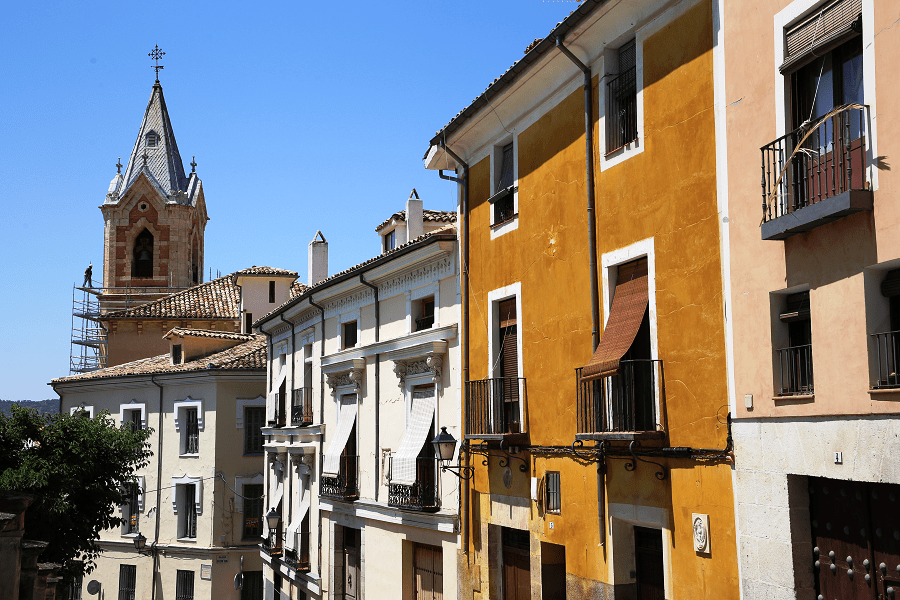 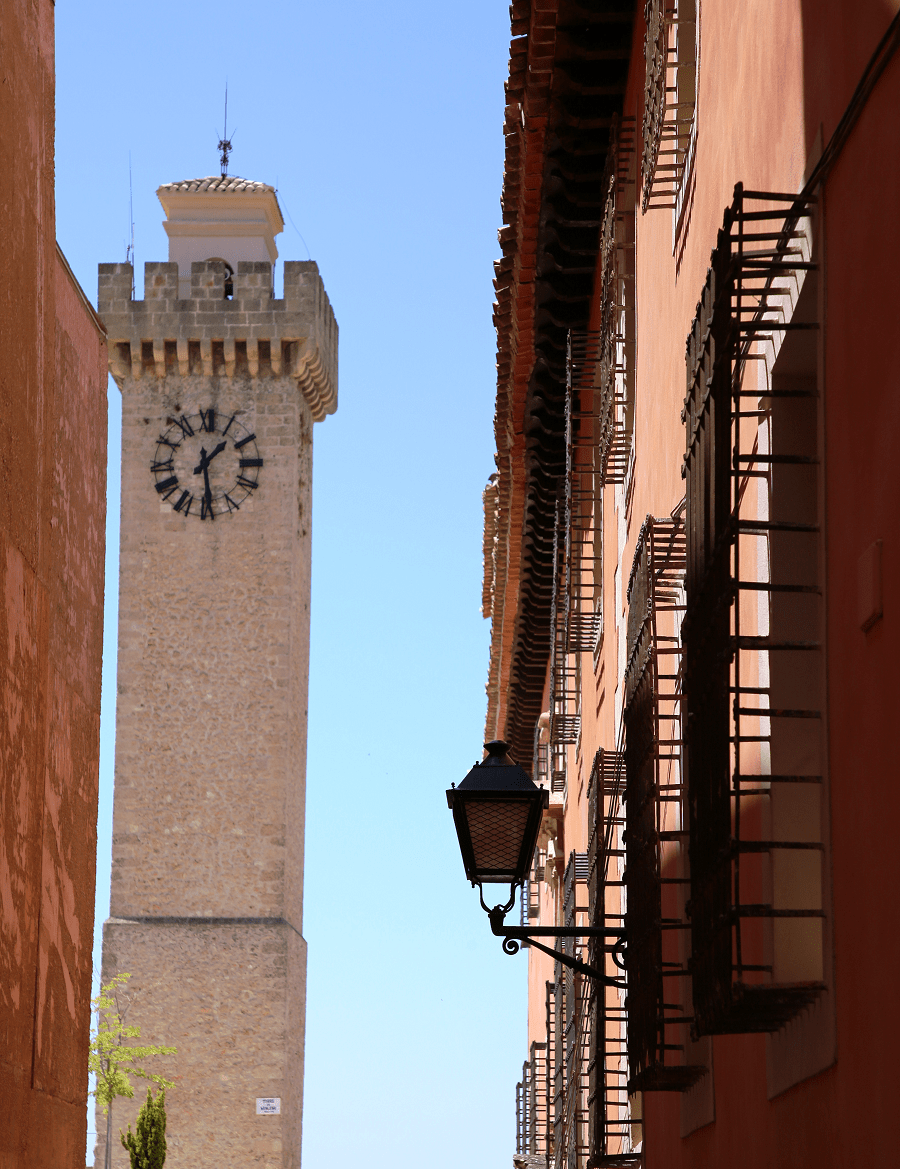