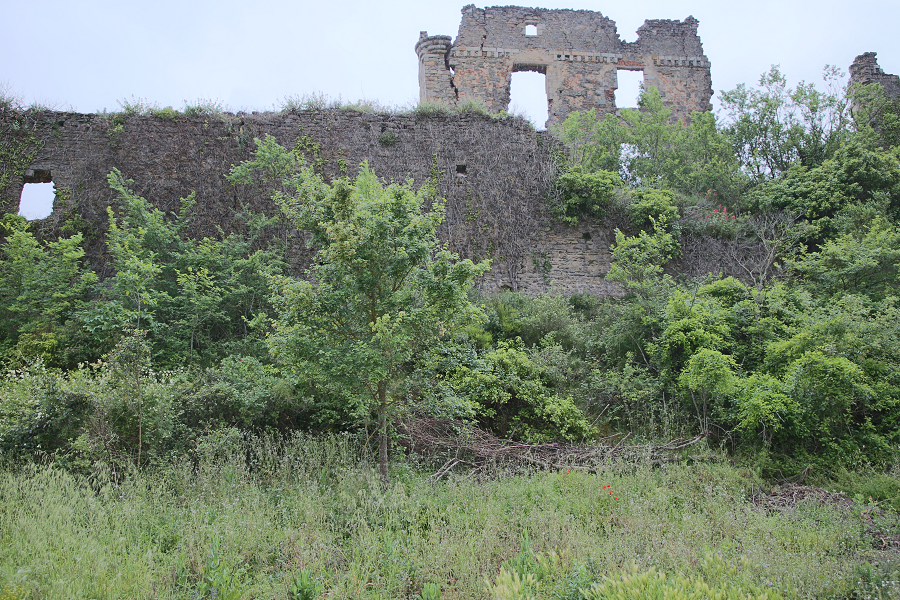 Ruined Coustaussa castle (fr. Château de Coustaussa) and the modern French village of the same name can be found in the Aude high valley, in Occitania, in the Eastern Pyrenees. This is the same valley which not only people inhabited from the very beginning of time, but also dinosaurs due to its location between the Pyrenees and the Mediterranean Sea.

The castle is visible from afar due to its large area. The fortress walls are 100 meters long and 40 meters wide but are partially destroyed.

The castle does not look like any of the other royal fortresses or defensive castles with observation towers that are characteristic of this region. Coustaussa Castle has a unique style which we can say has the elegance and comfort of a defensive building.

The first surprise for castle connoisseurs is the lack of underground passages in the castle.

The second surprise is the complete absence of traces of the use of weapons. Obviously, this medieval castle was rebuilt. They erased the “aggressive” side and replaced it with the “renaissance” softness. This is a complete discrepancy with how massive and warlike the castle seems from afar.

The third surprise is the presence of huge rooms. Of course, one can only guess this as many walls are destroyed. One detail betrays its origin nevertheless: this is a Romanesque window.

Finally, there is another architectural curiosity; it is the watchtower base on the northeast wall’s corner. One can find this type of architecture in Quillan Castle as well, located a few kilometers to the south.

We know very little about Coustaussa Castle. Trencavel, the Razes Viscounts built it in the year 1157; Razès is the historical region in the southwest of France, in the Aude department.

The castle became the property of the Vilar family later on, and the Fenouillet family owned it after that.

The De Montesquieu family also owned it after the Crusades.

After the marriage of Geraude de Fenouillet to Saix de Montesquieu in 1367, the lordship passed to the Montesquieu family, who retained it until the French Revolution.