Consuegra and its windmills • All PYRENEES · France, Spain, Andorra 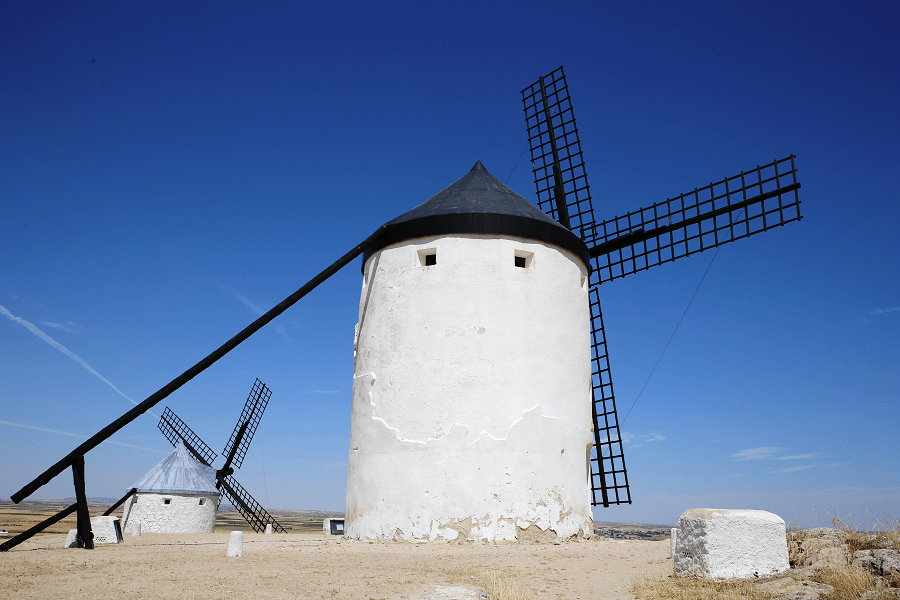 Consuegra is a municipality in the province of Toledo, in the autonomous community of Castilla-La Mancha, Spain.

Most Spanish windmills, like those described in Miguel de Cervantes’ early 17th century novel Don Quixote, can be found in the community of Castilla-La Mancha, in central Spain. The best examples of restored Spanish windmills may be found in Consuegra (together with Campo de Criptana and Alcázar de San Juan) where several mills spike the hill just outside town, giving a view of the 12th-century castle and of the town.

Consuegra is one of the most famous parts of the Don Quixote Route. 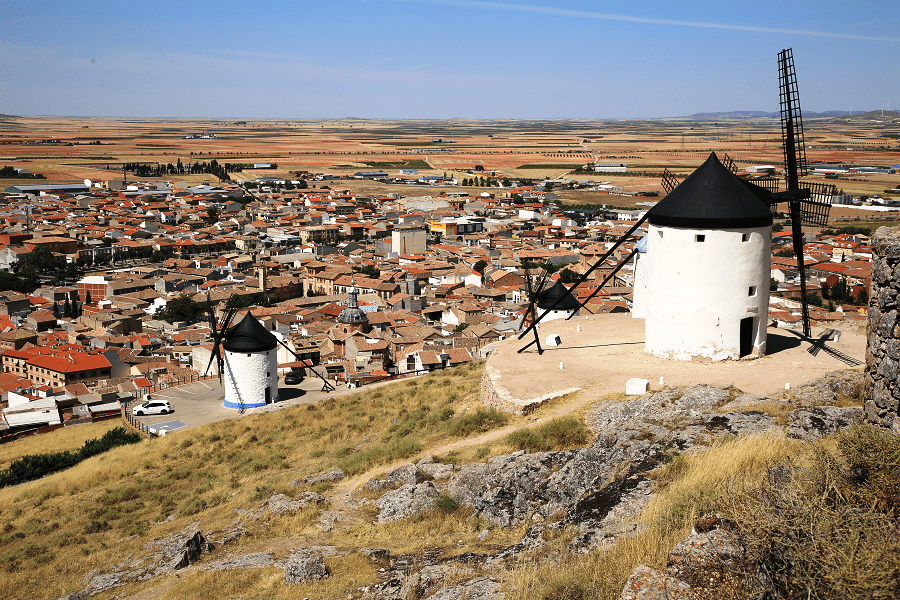 These windmills became famous in the 17th century, when Don Quixote was first published and introduced the scene of Don Quixote fighting with the windmills.

The introduction of the windmills into the local region was made by a “Caballeros Sanjuanistas”, who brought these machines that helped millers to grind wheat. The windmills were transmitted from fathers to sons for generations, and eventually stopped being used at the beginning of the 1980s. 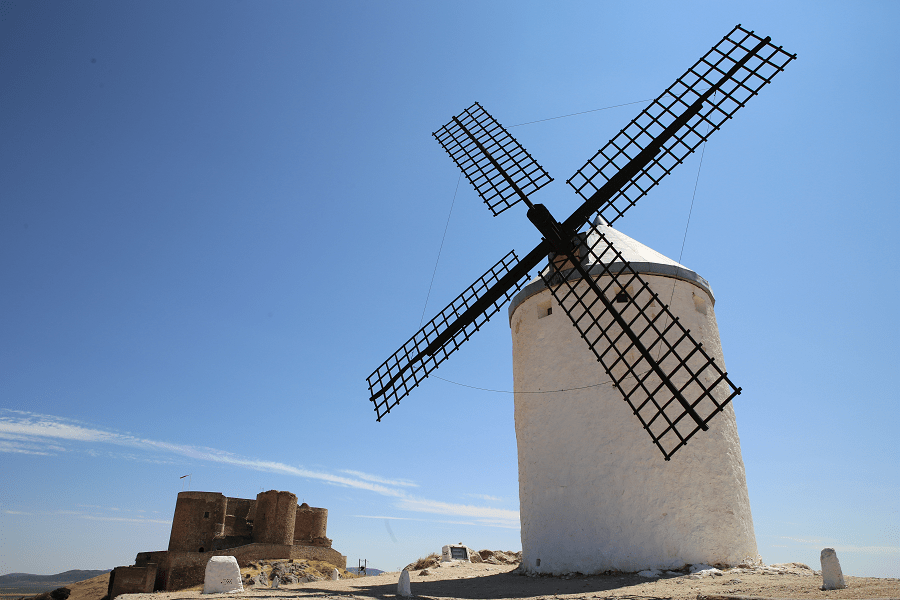 The windmills usually consisted of two rooms or levels. Millers had to carry sacks of grains that could weigh 60 or 70 kilos to the top floor, they rotated the sails of the windmill as the top part of the windmill or dome was movable. Other important parts of the windmill are tunnel (also known as canal, through it the grain goes down), container (where the grain is stored), and pieces of woods for moving the sails

There were originally 13 windmills in Consuegra, but only 12 have been reconstructed. These windmills are all located on a small mountain range south of the town, known as Cerro Calderico, that also hosts Castle of La Muela. 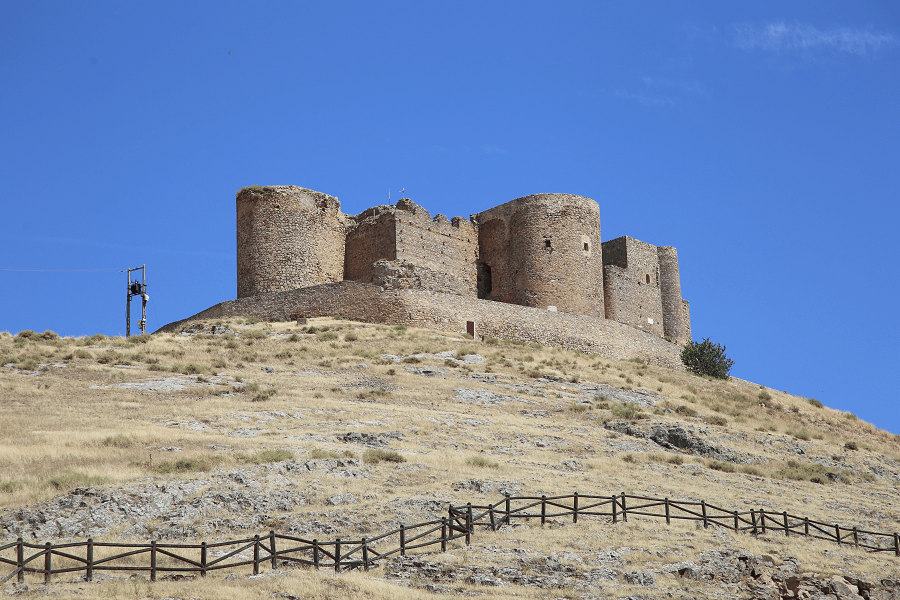 The castle tops off the Cerro Calderico, that also hosts a number of windmills, dominating over Consuegra. It was a stronghold of the Knights Hospitaller during the Middle Ages.

Gifted by Alfonso VIII to the Knights of Saint John of Jerusalem in 1183 along its dominions, the most relevant features of the fortification are dated after the donation, largely a number of expansions and restorations in the 12th and 13th centuries. An hermitage was built in the castle in the late 15th century. The castled endured notable damage during the Peninsular War. It became a municipal property in 1962. 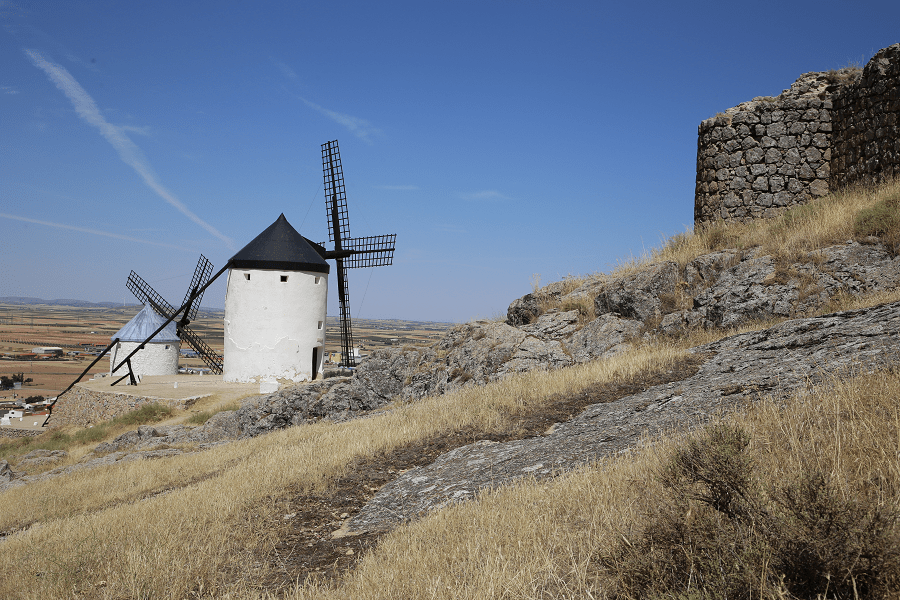 The whole Cerro Calderico—along the castle and the windmills—was declared Bien de Interés Cultural under the protection status of “historical site” in 2008.

Built in the Mudejar style in 1567. It has a Latin cross plan, has a quadrangular dome, porticoed side entrances, and is built with stone and brick, inside it preserves two Renaissance façades. The presbytery is presided over by five paintings by the artist José de Beratón from the late 17th century, representing the Baptism of the Lord, Saint Joseph, Saint Joaquin and the remaining two cherubs with the attributes of passion. The remodeling directed by the royal architect Juan de Villanueva dates from this period. 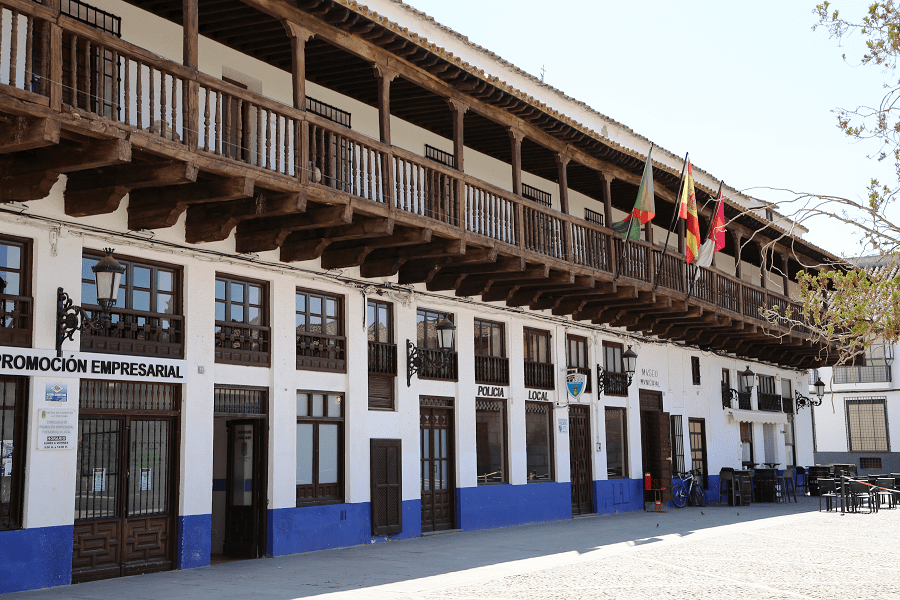 Construction began around 1750, finishing in 1803. It was inaugurated in neo-baroque style on September 15, 1803. It has a Latin cross plan; Its white marble façade stands out, with a mixture of baroque and neoclassical elements. Inside is the image of the Stmo. Cristo de la Vera Cruz, patron of Consuegra, and various Holy Week Images. 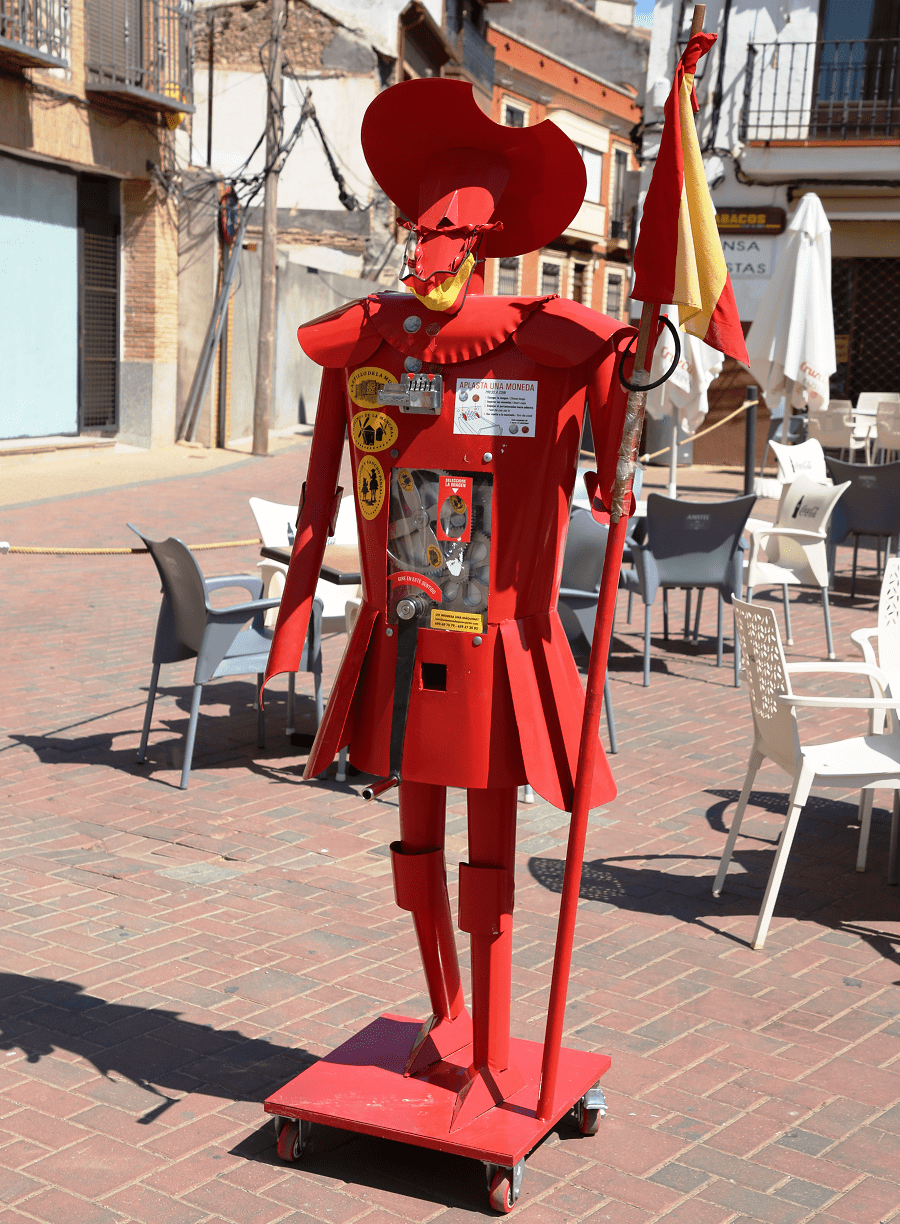 Built in 1723. Temple with a single nave, in Toledo Mudejar style, with a porticoed entrance. In the lower area of the apse, there is a Mudejar style crypt. Inside is the image of María Santísima de la Blanca, patron saint of Consuegra, and the remains of Blessed Diodoro Rafael, Eustaquio Luis, Felipe José and Carlos Jorge, Brothers of the Christian Schools. At first it was the church of the Convent of San Antonio de los Franciscanos, until the destruction of the first church of Santa María la Mayor by the French in 1812. Later, and once abandoned by the Franciscans, it became the Parish of Santa Maria. 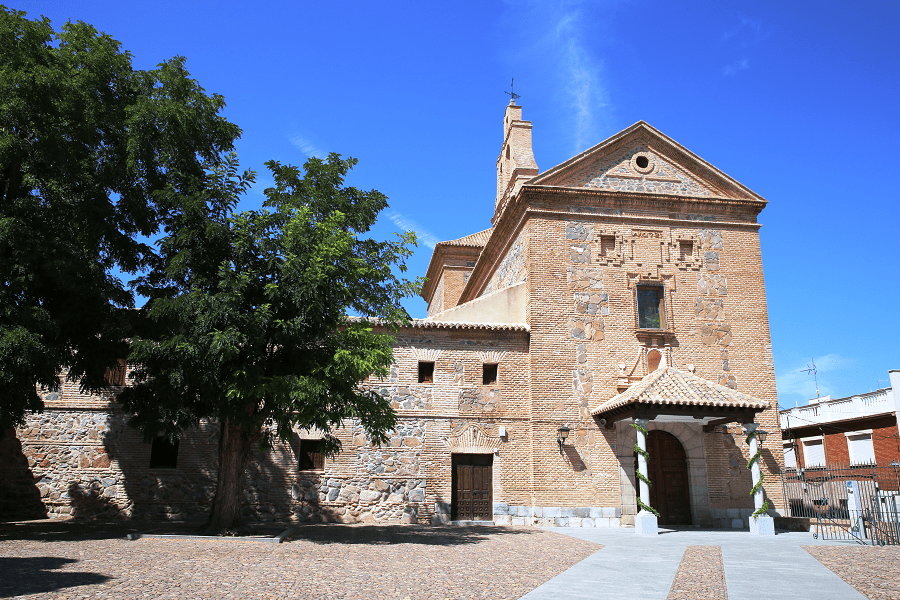 The Plaza de España is the ancient Roman Forum where the locals used to meet and gather. It is the center of many of the social and cultural events that take place in the city. In it is the Town Hall, in Renaissance style, it was built in 1670, as a granary, joined to this building by an arch, is the clock tower . You can also see the building of “Los Corredores”, from the 17th century, with a beautiful wooden balcony, typically from La Mancha, it was a silo, alhóndiga and town hall. 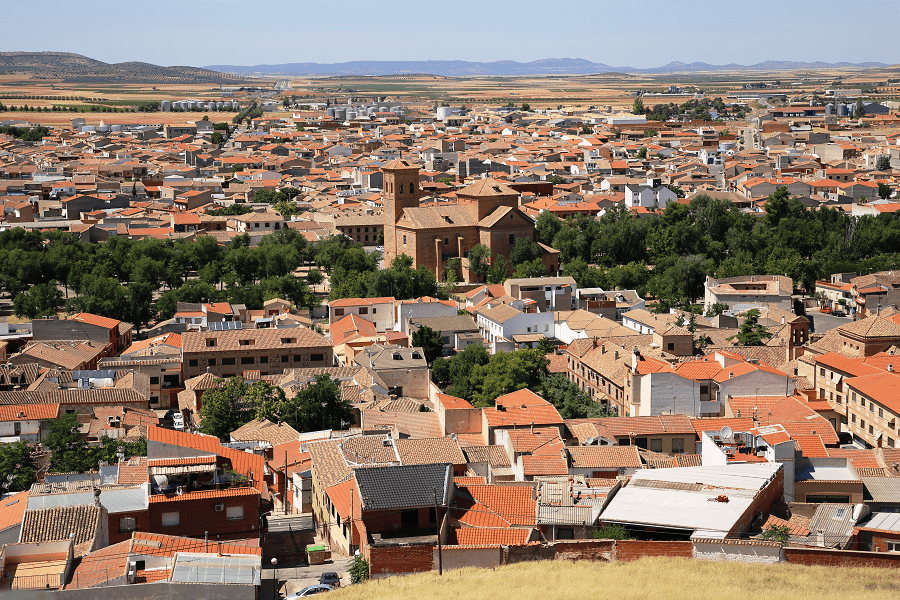 It currently houses the Municipal Archaeological Museum, with pieces ranging from the Neolithic to the 19th century. To the east, is the building of the Fundación Díaz Cordovés y Señora (Elvira Martín-Palomino y de la Mora) (1925), which housed the Colegio de San Gumersindo, run by the Brothers of the Christian Schools (La Salle), of Toledo Mudejar historicist style.

The convent of Nuestra Señora de los Dolores dates from the 17th century and has its origin in the convent of Santa Ana de las Recoletas Bernardas Nuns. After the confiscation of Mendizábal, it became private property and was later bought by the City Council, which gave it to the Franciscans, who established the Novitiate of their Missions in the Philippines. It is currently occupied by the San Francisco de Asís Residence, for the elderly. 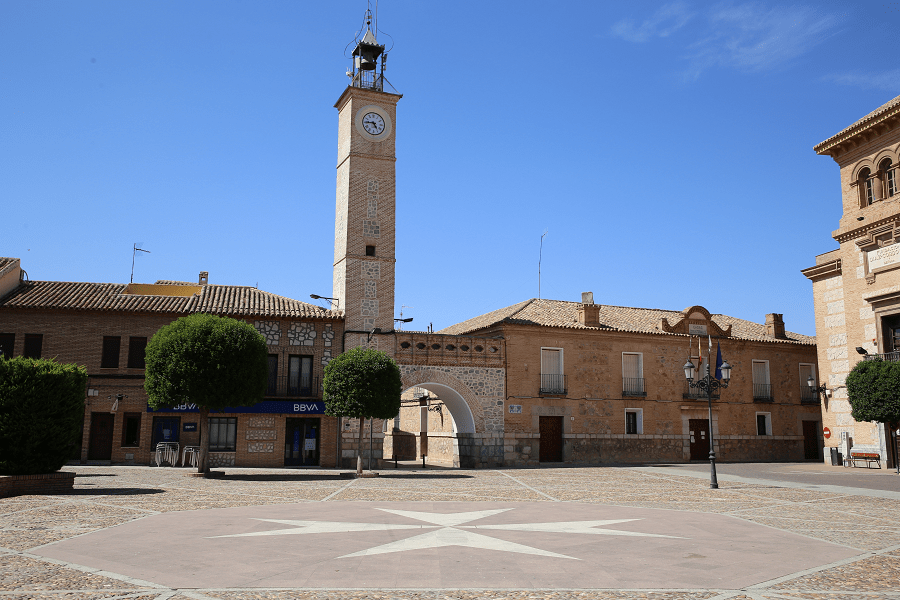 El Alfar is a building with a popular La Mancha tradition. There are the remains of the ancient Roman circus.

The convent of San José, 16th century. It was erected by testamentary disposition by the Grand Prior of the Order of San Juan, D. Fernando Alvárez de Toledo, in thanksgiving for the sentence granted to his family by the body of Saint Teresa of Jesus. 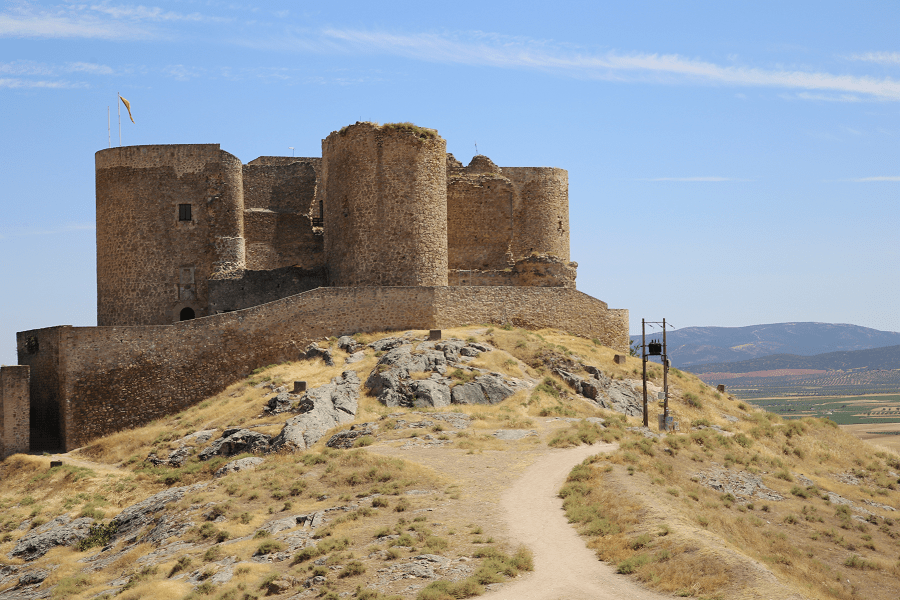 The house of the Tercia are the remains of the old palace of the Grand Priors of the Order of San Juan. The entrance tower is preserved. Today it is occupied by an establishment dedicated to hospitality. In its patio you can see several Roman bases and capitals, as well as two sculptures from the same period.

The Roman dam, I century. It is located several kilometers from the urban center, characterized by a length of 630 meters, on the Amarguillo River, the largest of the preserved Roman dams. 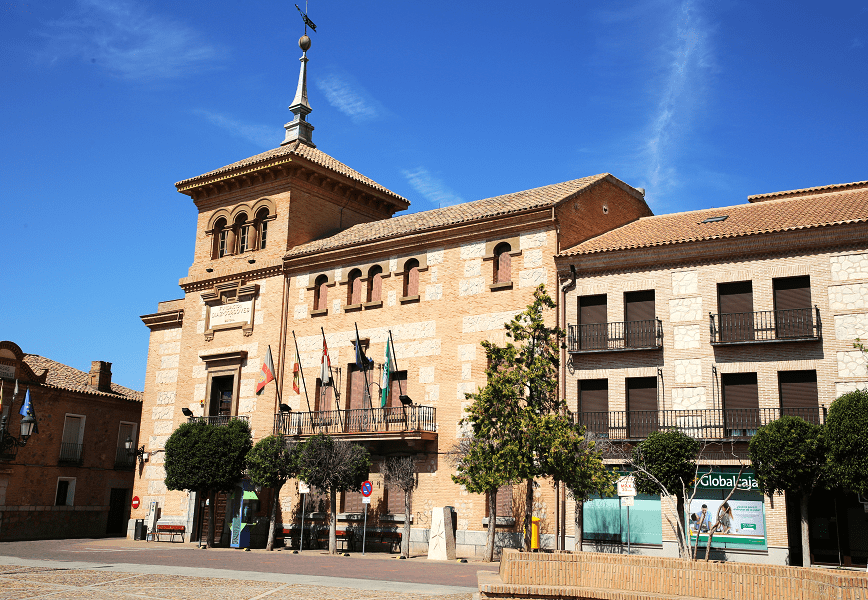