A concert of "Raphael Simphònic" accompanied by the National Orchestra of Andorra (ONCA) took place in Andorra on 30 September • All PYRENEES · France, Spain, Andorra 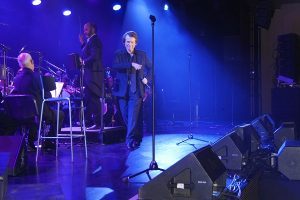 A concert of “Raphael Simphònic” accompanied by the National Orchestra of Andorra (ONCA) took place in Andorra on 30 September. Rafael – one of the most well-known and respected Spanish artists. Each of his songs – a little improvisation on stage, a beautiful story – about life, love, loneliness, frustration, happiness.

Rafael played his most famous songs. “For me, each concert – a new duel in which I can’t loose. I can not afford to at least someone came out of the hall dissatisfied. Someone can not like my singing, but nobody can say that I do not give away all my power”, said Rafael on his web page after the concert.

According to art director of ONCA Gerard Claret, Raphael’s concert – one of the most important cultural events of Andorra this year.

The concert was organized in the framework of the campaign “Andorra la Vella – the capital of the Latin-American culture in 2016”.

Miguel Rafael Martos Sánchez (born May 5, 1943 in Linares, Spain), often simply referred to as Raphael, is a worldwide acclaimed Spanish singer and television, film and theater actor. A pioneer of modern Spanish music, he is considered a major influence in having opened the door and paving the way to the flood of Spanish singers that followed on the wake of his enormous success. His wide-range voice, added to his quality as showman, has entertained and engaged people worldwide for more than five decades.