COMJIB and Andorra will discuss the possibility of accession of Andorra to the Treaty establishing COMJIB, to become a full member of this organization • All PYRENEES · France, Spain, Andorra 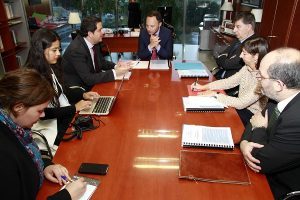 The Secretary-General of the Conference of Ministers of Justice of Latin America (Conferencia de Ministros de Justicia de los Países Iberoamericanos, COMJIB) Arkel Benítez arrived in Andorra to discuss the prospects of international cooperation in the judicial sphere.

During the visit he met with the Minister of internal affairs of Andorra Xavier Espot. The parties also discussed the possibility of accession of Andorra to the Treaty establishing COMJIB, to become a full member of this organization.

COMJIB – an international organization that brings together the Ministries of Justice and other similar institutions from 21 countries of the Latin American community. Its mission is to study and popularize the options of legal cooperation between the Member States. COMJIB work focuses mainly on the fight against transnational organized crime, reform of the prison system.