Campan - a French city in the Upper Pyrenees, famous for its marble deposits and a straw dolls exhibition • All PYRENEES · France, Spain, Andorra 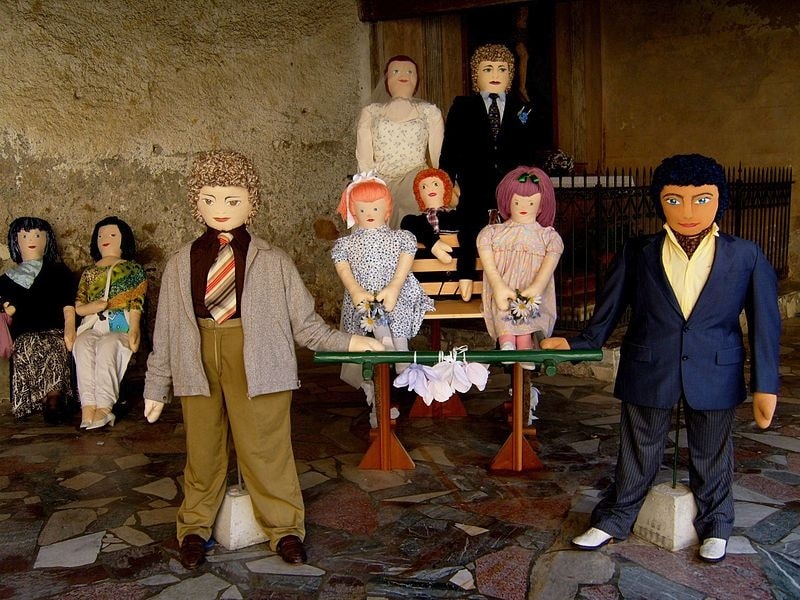 Campan (fr. Campan) is a commune in France, located in the Hautes-Pyrenees department, Occitanie region.

The town name probably comes from the Campon tribe name, which Roman commander Valerius Messala defeated in 28 BC. near the Payolle town – 13 km from Campan.

They built the first church in the Campan Valley in the 1st century AD. 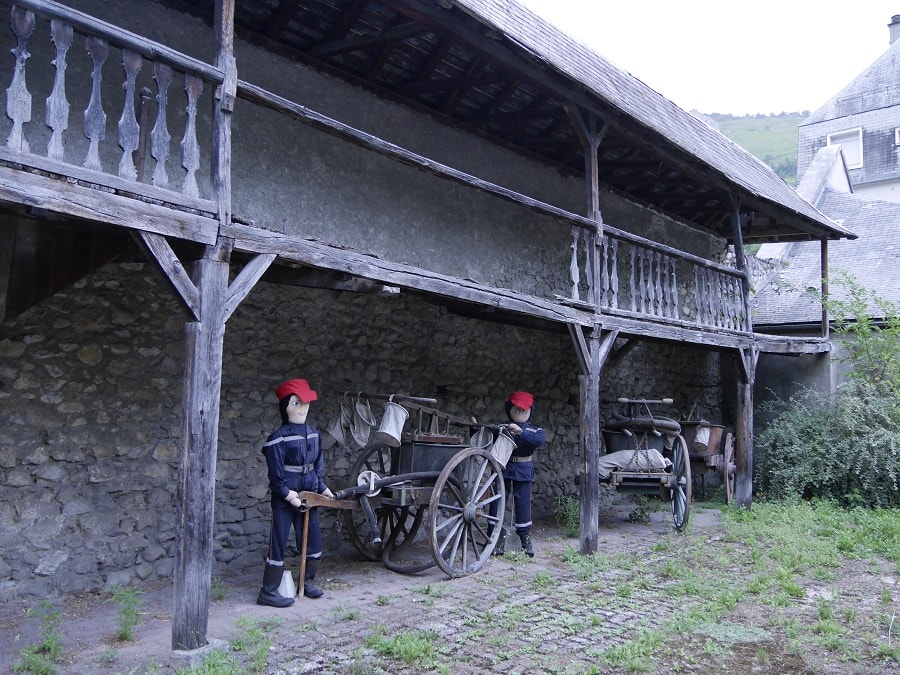 We know that between the 9th and 15th centuries the Campan inhabitants waged territorial civil wars with the Bigorre inhabitants, an area that represents a major part of the Upper Pyrenees department. Campan gained independence from Bigorre in 1429. The Campan consuls received the right to conduct an independent trial and criminals imprisonment from Gaston IV, Bigorre Count, in 1470. The Campanians also received the right to trade in their own city market, including livestock trade after almost a century, in 1582. 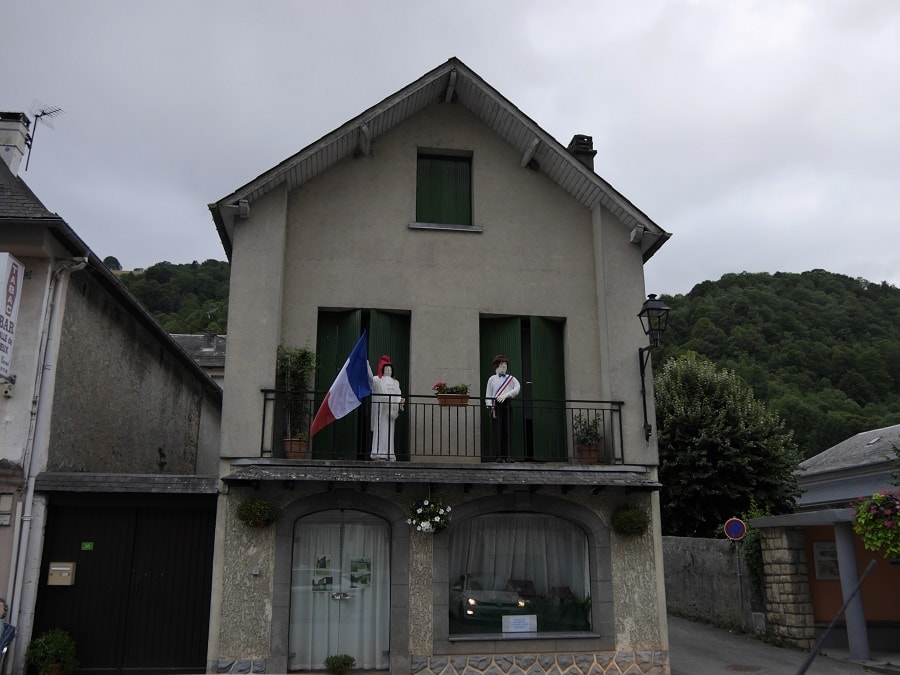 There were cagots in the Campan valley like in many regions of the Pyrenees (cagots is a derogatory term referring to a group of artisans who disgusted and disdained fellow citizens, especially in Gascony and in the Pyrenees foothills.

The cagots poor reputation is due to the superstition attributing leprosy to them). Cagots lived on the Adour River right bank. They built the San Sebastian (Saint-Sébastien) chapel in a place called Pré de Ferrand around 1580. A fire damaged the church in 1597, and another fire destroyed it completely in 1694. 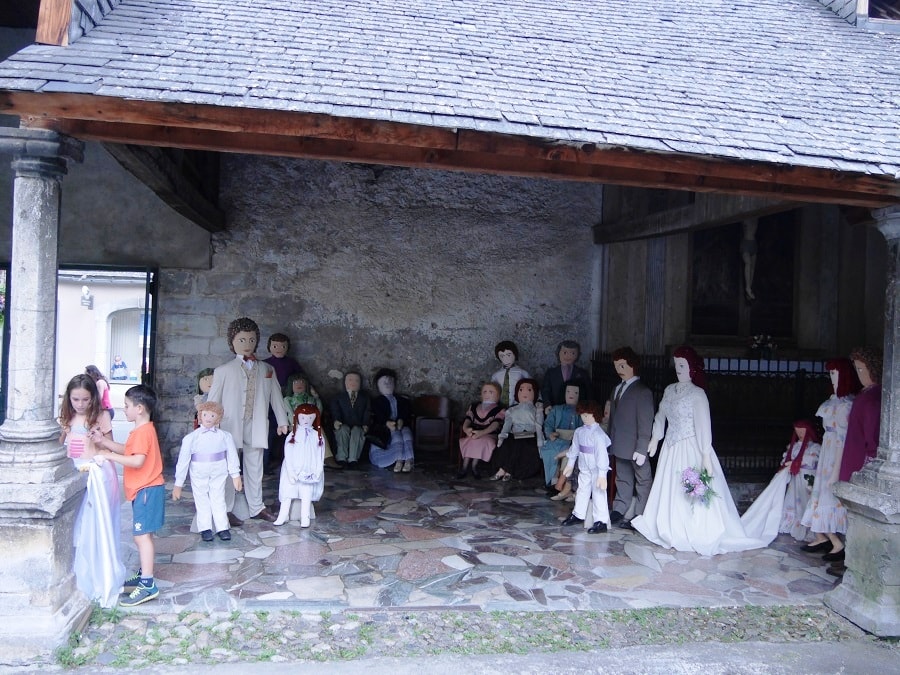 They call the bridge connecting the two banks of the Adur River the “Cagot Bridge” today.

The medieval religious wars influenced the Campan valley. The town, in particular, participated in the Catholic Army creation. 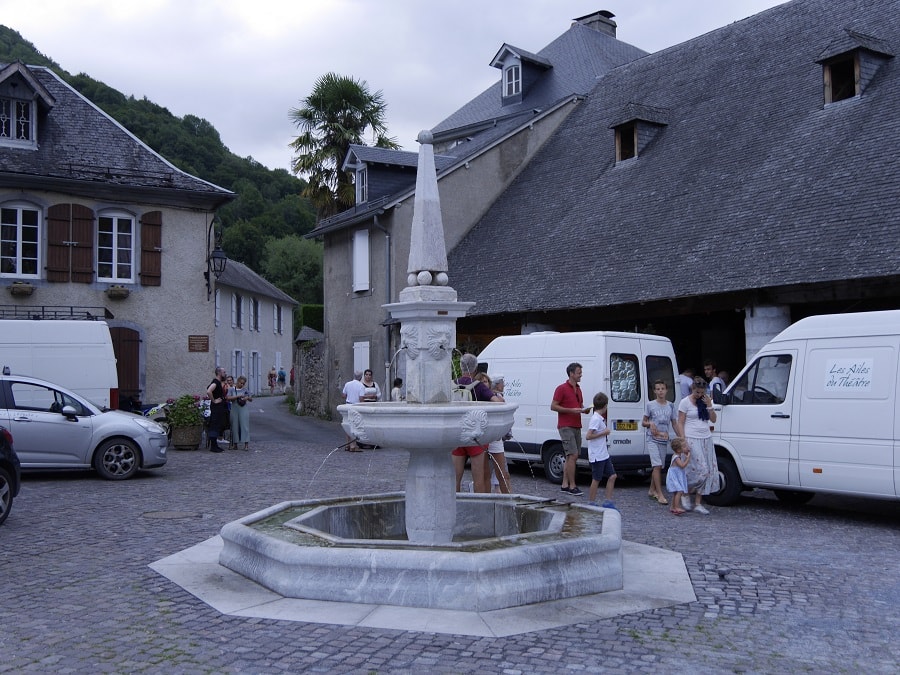 Campan suffered very much from the plague at the end of the sixteenth century, between 1588 and 1589.

The Campan “Golden Age” begins in 1600. The town begins active trade with its neighbors. Catalonia makes a big contribution to the town well-being – seasonal workers come to the city, as well as teachers and doctors.

Campan joins the Crown and officially recognizes the king in 1607. 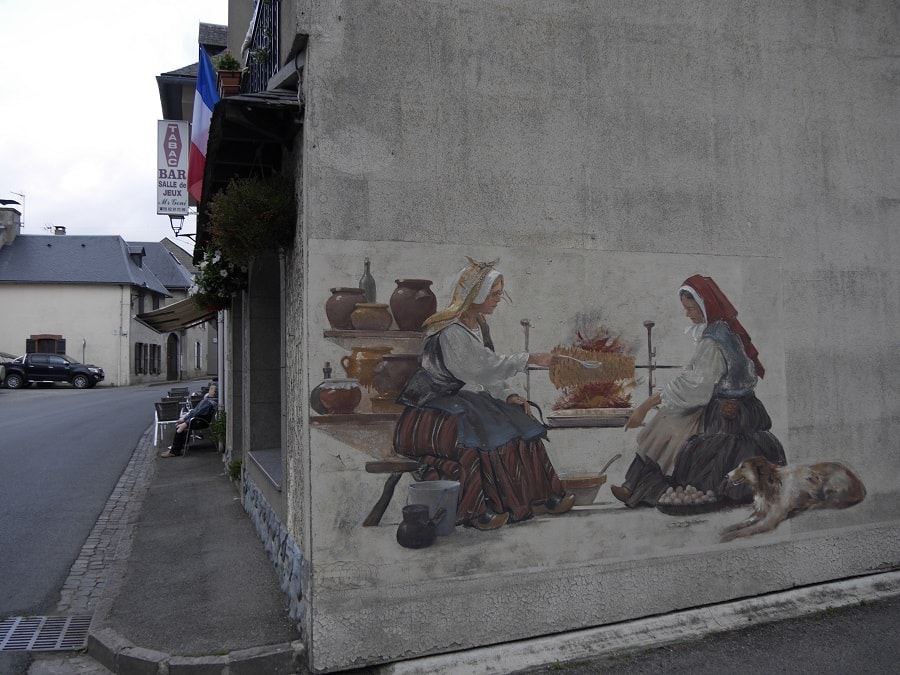 A new plague epidemic of 1628, which came from Toulouse, destroys the city and surrounding territories again. Only one out of 400 inhabitants survive in the neighboring village of La Séoube, 10 km from Campan. 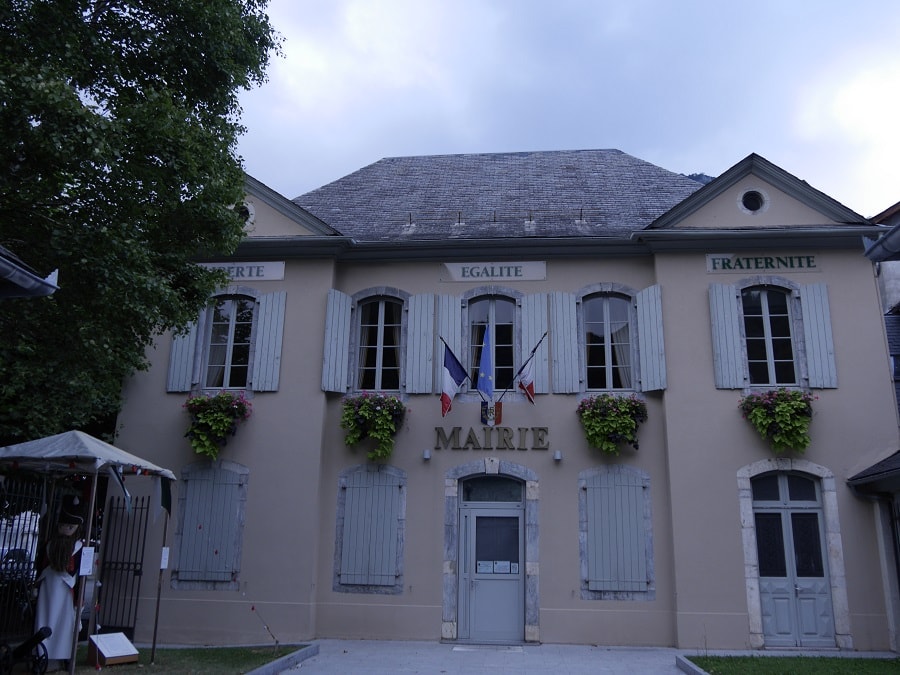 Another misfortune befell the city in 1694 – a fire devastates most of the town (about 70 houses and the city church). Two thieves were guilty of this, who set fire to a little-known tavern to take advantage of the residents’ panic and escaped with the loot. However, they were caught, taken to Toulouse, where they were convicted and burned alive.

They discovered the copper ores in the Campan Valley in 1779. 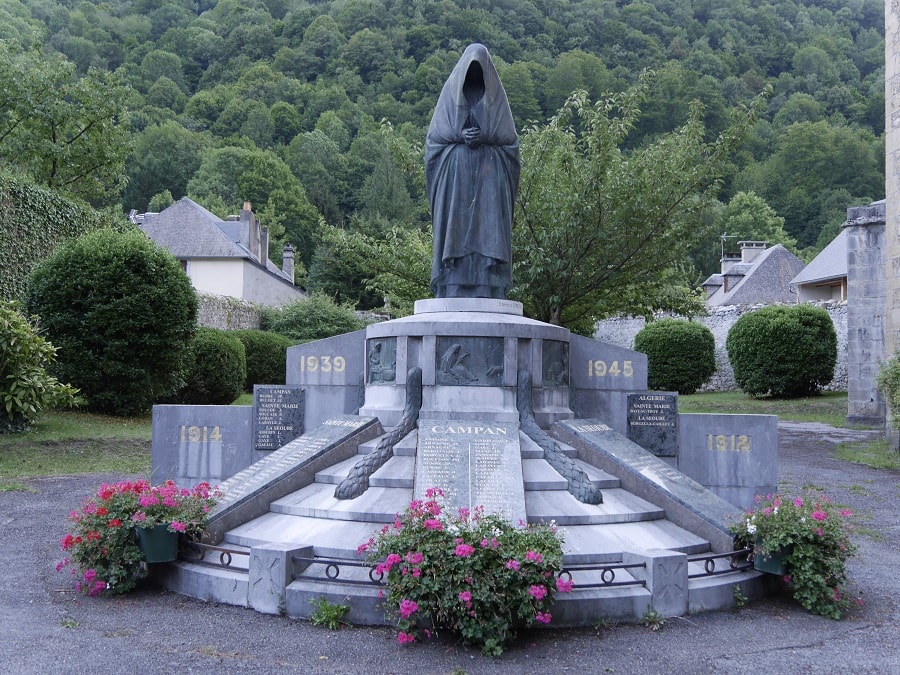 Reform affected Campan in 1779. The town mayor’s appointment became king privilege. The commune turns to the king with a petition, asking his majesty to return the citizens’ election right for a monetary reward. King agrees by accepting two thousand pounds. However, he extended the first consul powers, which causes great discontent among residents in 1782. However, during an inspection conducted by Bishop Bigorra in 1783, the asked question, “Who is the master of the parish?” The Campan residents answered unanimously, “We have no other lord but the king.”

Campan, with 4,329 inhabitants, became the department’s third settlement after Tarbes and Bagnères-de-Bigorre towns in 1820. 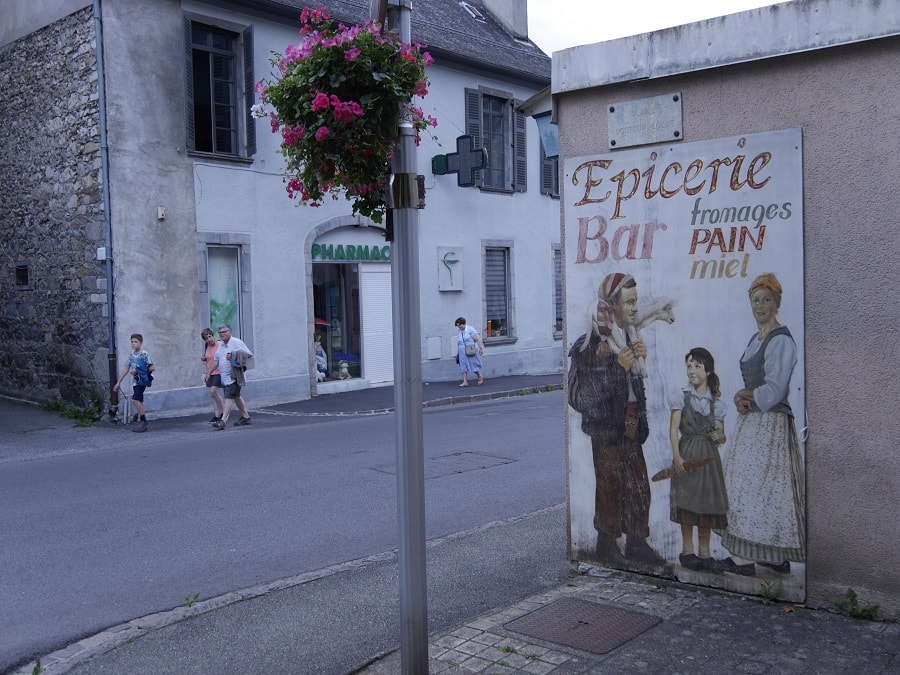 Campan Valley gained worldwide fame thanks to its marble deposits. Romans opened stone-pits here. Campan marbles have always been highly regarded. They had different color combinations and special texture. They called Campan green marble or Green Griotte marble Verd Verd. This marble was especially popular for the interior decoration of Versailles, as well as the Westminster Palace in England.

Life-size dolls (les Mounaques) – made of rags and hay and dressed in traditional clothes. These dolls are local traditions; they exhibited them every summer, from July to September. One can see them everywhere: on the streets, balconies, in the gardens.

There was a special system of inheritance of family property in the Campan valley: eldest child, regardless of gender, inherited it. The eldest son or eldest daughter received land, livestock, and house. Therefore, men traditionally “hunted” for the eldest daughters of wealthy families’ parents, and women were seeking to become elder sons’ wives. If the girl decided to marry a man from another parish, and the man decided not to marry a local girl, the town residents demanded compensation. So that the bride or groom did not forget about this, on the wedding eve they came to their house with cowbells on their neck and made noise under the windows. 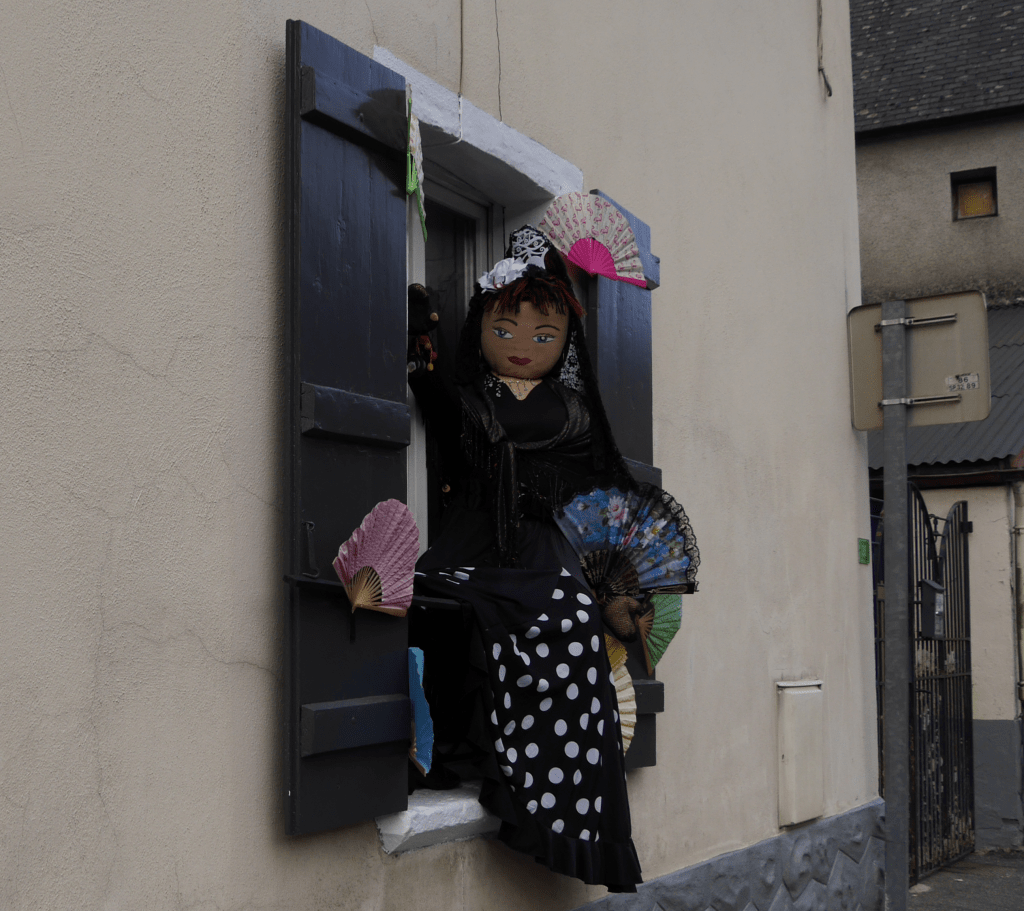 There is a famous monument to the dead in the courtyard. Monument to the fallen from Campan “La femme au capulet” by Edmond Chrètien – located at the St. John the Baptist (Saint Jean-Baptiste) Church territory. The monument facade is three tombstones with the three communes’ names: Campan, Sainte-Marie, and Séoube. They came together to express the pain and sorrow that the statue of a woman symbolizes. Her dress is the valley traditional woman’s cloth.

There is the covered market (La Halle de Campan) in the town center; it used to be a place for the cattle sale. The building has a slate roof; 13 stone columns and walls support the wooden frame. The building hosts cultural events, in particular, theater performances today. The building dates from the 16th century. It received the historical monument status in 1927. 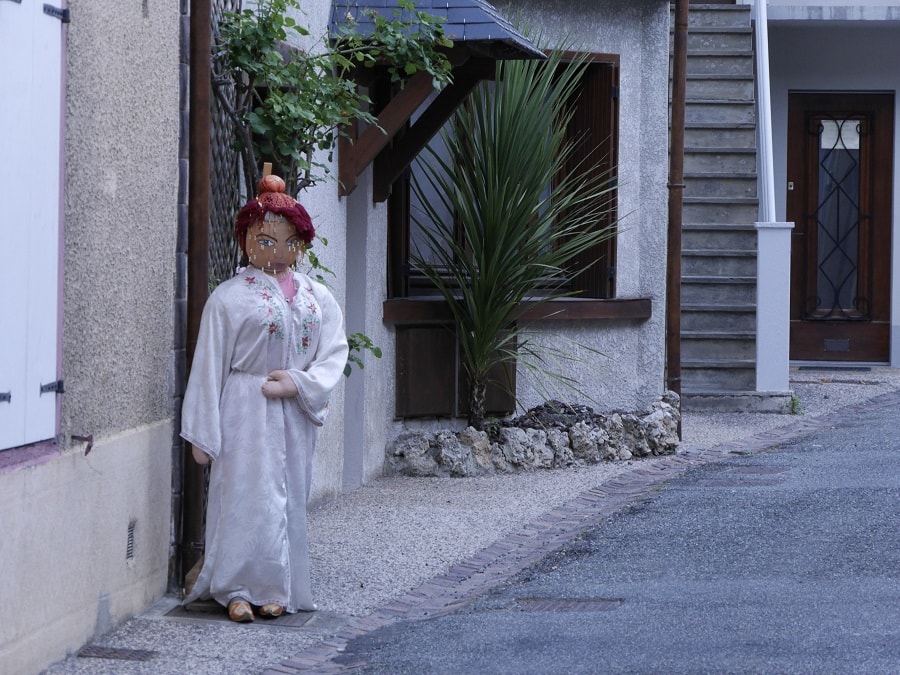 There is a stone fountain constructed in 1628, near the market building. The pyramidal fountain made of pink marble. The fountain is also a historical monument.

St. Mary Church of Campania (Notre-Dame-de-l’Assomption de Sainte-Marie-de-Campan) with a square bell tower, resting on a single nave. Timber rather than stone dominate in the interior. The church has been a historical monument since 1989.

Sainte Marie de Campan Smithy (La forge de Sainte-Marie-de-Campan) – one of the peaks of the Tour de France route. The famous French cyclist Eugène Christophe during the 1913 Tour de France stage had to stop here to fix his bike, as evidenced by a memorial plaque on the facade. A bronze statue depicting a cyclist appeared on Sainte Marie de Campan Square on July 18th, 2014.

Campan and the surrounding area is a favorite place for cyclists today.

There is Mongie town in 20 km from the town; from where you can take the cable car to the international starry sky reserve of France – Pic de Midi. 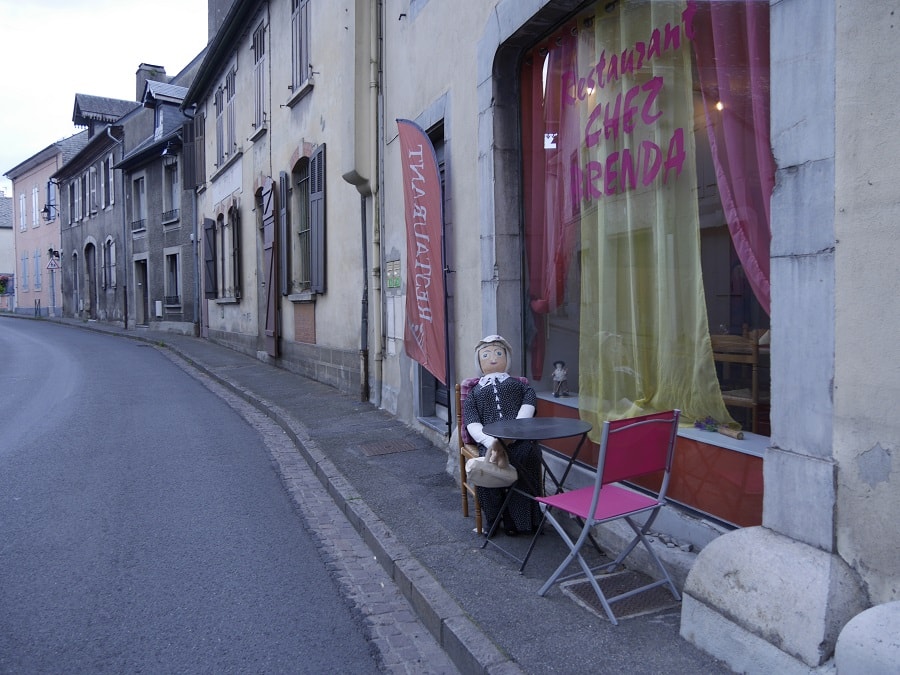 There are a few restaurants in the city. The most famous are Restaurant Chez Brenda (Italian cuisine), and Auberge Des Pyrénées and La Campanoise (traditional french cuisine, local produce).

There are several shops in the city where you can buy souvenirs including small straw dolls.

Chinchón and its Plaza Mayor 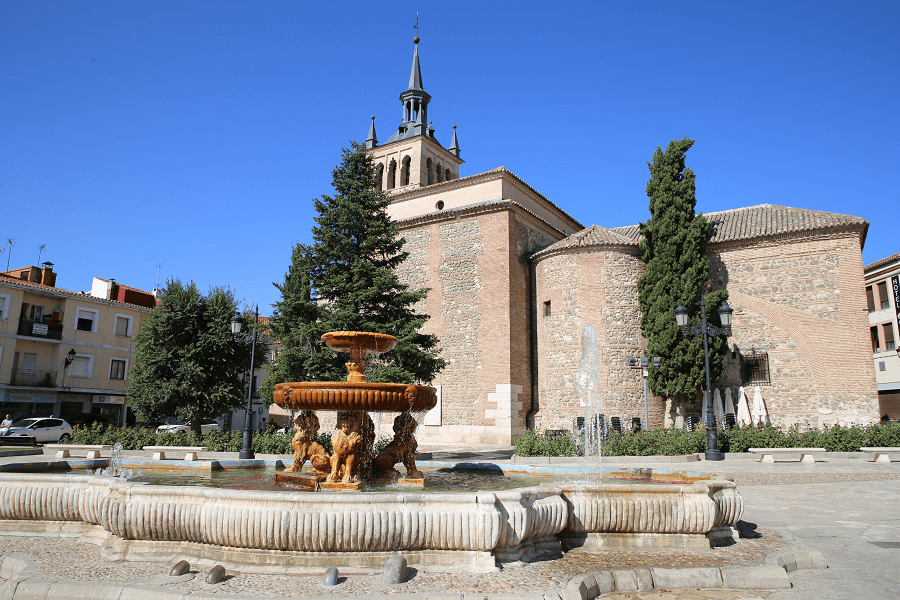 Illescas and its attractions 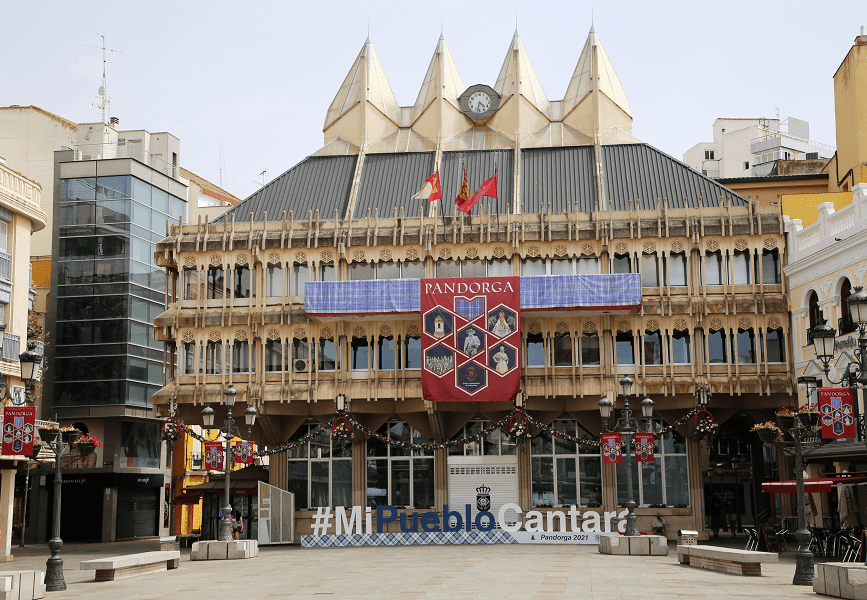 Ciudad Real and its attractions 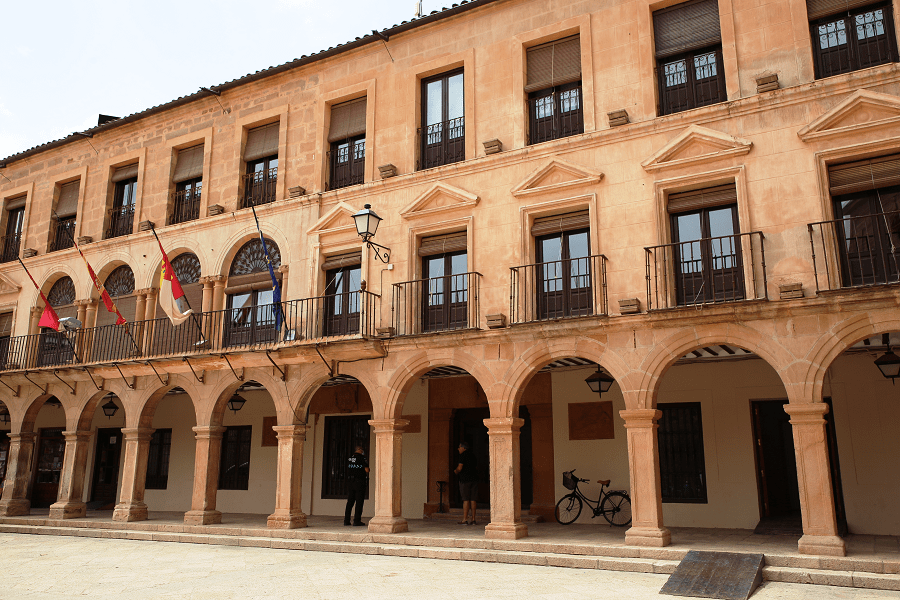