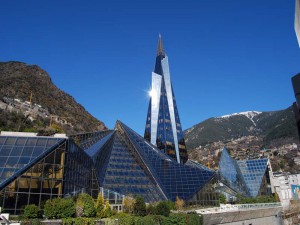 Caldea SPA resort (it is in Andorra and considered one of the best SPA resorts in Europe) reopened on 19 of June, 2015 after 20-day repair. As the architect of Caldea Jean-Michel Ruols explained, after twenty years of operation the building needed reconstruction. €500 thousand were spent for repair. In particular, color of a thermal lagoon was changed — it became lighter. New color, according to the architect, will allow to use more effectively illumination of an interior and illumination of water.

In general, within three years shareholders of Caldea intend to invest about €2 billion in global reconstruction of the resort. The main emphasis will be placed on the organization of good family rest. “We prepare the original concept which, we hope, it will be pleasant to our clients”, – the director of Caldea and Inúu (a new complex of thermal springs in Caldea) Miguel Pedregal declared.

The reconstruction plan will be submitted for discussion of shareholders of Caldea soon. It is known that creation of the big center of entertainment for children — analog of an aquapark is supposed. It is also planned to organize the additional areas for beauty and procedural shops, and also clothing stores, perfumery, medical and decorative cosmetics. “We want to create such center of leisure in which both adults and children would like to spend not one day”, – Miguel Pedregal summarizes.

Look here for details about Caldea and INUU SPA