A cable car to connect Andorra la Vella with Vallnord is very expensive and can cost between 30 to 40 million euros, says the president of Vallnord Pal Arinsal sector David Baró Riba • All PYRENEES · France, Spain, Andorra 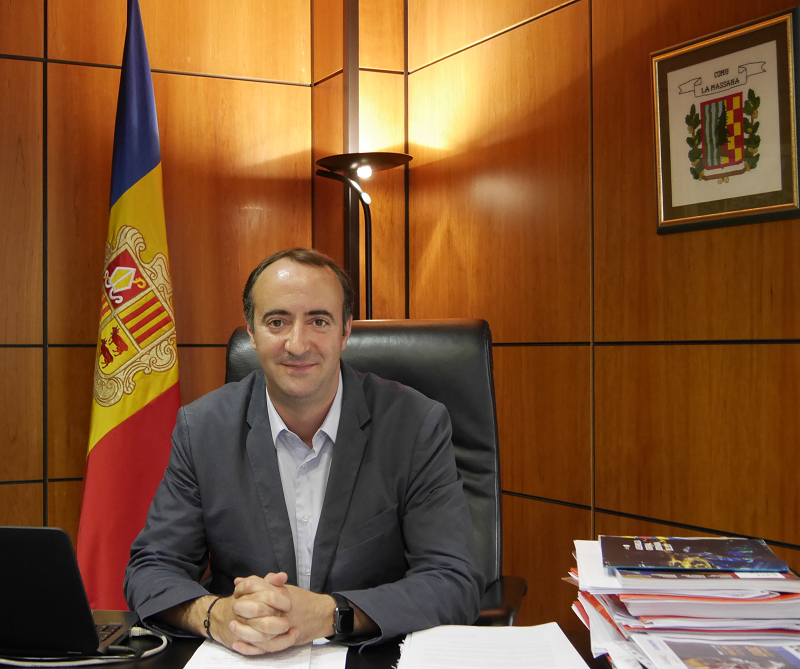 The president of the Andorra ski station, Vallnord Pal Arinsal, mayor of the administrative district of la Massana, David Baró Riba, told all-andorra.com about the major investment projects of the ski resort:

In 2014, the intention to build a cable car that would connect the capital of Andorra with the Vallnord ski station in Pal was announced. At what stage is this project now?

This project is very expensive – it would cost between 30 to 40 million euros – and requires a lot of investments, which should be 100% private. At the moment there is no investor which is a shame because the construction of a cable car would increase tourism interest for the whole country.

The second stage would be to connect the cable car to the station in Pal. This part of the project also needs 100% private capital.

The entire construction process must also meet all ecological and safety requirements.

The project will not be implemented without the consent of local residents, obtained by voting.

E.M. A. P. announced the intention to invest € 6.7 million over the next two years in developing the infrastructure of the Pal Arinsal sector. Do you plan to attract foreign investors?

E.M. A. P.’s strategy is reasonable. It is aimed at upgrading and improving the Pal Arinsal station, including the acquisition of new equipment, an increase in the range of services and installation of new cannons for artificial snow. Such guns will be installed in Pal, on the Font Roja and la Transversal slopes. For this purpose, 2.4 million euros will be spent this year and 4.3 million euros next year.

The first stage of the project will also include improving the arrival zone to the Coll de la Botella station – the construction of a new parking plot, the opening of a new ski school and new restaurants with large terraces.

The second stage of the project envisages arranging new routes for beginners in both sectors of Pal and Arinsal, as well as the creation of all necessary infrastructure for international competitions in mountain skiing. Investments will also be used to modernize the ski school in Arinsal (the total budget is 340 thousand euros).

In the area of ​​Comallemple will also plan to build a water basin of more than 20 thousand cubic meters. It is necessary for the production of artificial snow.

The work will be fully funded from la Massana administrative department’s budget.

E.M. A. P. is a company that is 100% owned by the administration of la Massana and its profit for the past ski season 2016-2017 was 17 million euros. We have been steadily fixing profits over the past four years and are not specifically looking for private investors. At the same time, we will be glad to hear alternative proposals for improving the infrastructure.

Does Vallnord interact with other ski resorts in Europe?

Yes, we are a member of FIANET (Association of Ski Resorts in Europe) and regularly participate in working meetings and meetings with other ski resorts in Europe and around the world.

What are the main sporting events planned for the summer season?

From 4th to 9th July we held the Andorra Ultra Trail (endurance race with different routes for professionals and fans of different levels of training). On 15th July, we held a competition for children from 2 to 5 years old “Kids Bike Riders Challenge”, as well as “Girls Bike Week-End” for women (high-speed mountain biking). On 16th July, the jubilee 40th Volta als Ports d’Andorra competition was held for cyclists with four different routes. In late July, we will compete in the mountains of the “Youth Skyrunning World Championship” (peak Comapedrosa).

In August we will organize a petanque championship, a mountain race from Ordino to la Massana and an X-Runners run in Arinsal.

There are also several competitions scheduled for September and October, in particular, the 3rd Vertical Kilometer race and the Mountain Bike Catalan Cup (VTT).

We work together with Ordino’s administrative department in order to increase tourists to Vallnord in winter and in summer. To do this, we actively invite private entrepreneurs to stop doing “seasonal business” and to be engaged in business all year round. This applies to the ski rental and equipment points – in the summer time, some centres began offering mountain bike rental services.

We also arrange gastronomic weeks for our tourists under the Vallnord brand, and now you can see an increase in the number of restaurants and bars opened in the summer.

The question, which is already asked by skiers: will the prices for ski passes in 2017-2018 increase?

We have not yet decided on one-day and other tariffs for ski passes. Last year, prices increased by 1 euro compared to the previous year (a one-day pass in our sector cost 38€). I do not think that the increase in prices in the next ski season will be greater.

What are the plans to develop the brand Vallnord outside of Andorra?

Our advertising policy is based on the principle of Bike & Ski, which works all year round, both in winter and in summer.

Can you name the main disadvantages of Vallnord today?

As I have already said, Vallnord is a trademark of two ski resorts: Pal-Arinsal and Ordino-Arcalis. Both resorts have their own characteristics. Pal-Arinsal is a wooded area, there are many trails for beginners, but slightly less trails for experienced skiers. This sector is ideal for outdoor activities for the whole family. Ordino-Arcalis – a resort with a wide area for freeriding, is more suitable for experienced skiers and professionals – there are less slopes for beginners, but these are seen as features rather than disadvantages.

What new tourist markets are most attractive to you as the president of Vallnord Pal Arinsal?

Vallnord is already trading in many markets in Europe, especially in Spain, Britain, Portugal, France and Russia. As for new markets, we are now interested in Brazil and China.