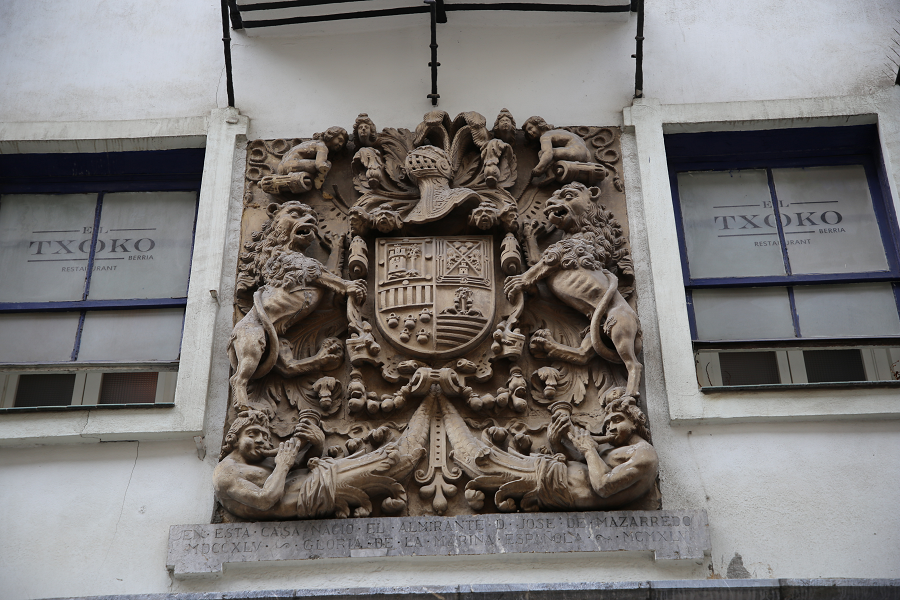 The remains of an ancient settlement dating from the 3rd or 2nd century BC were found in the vicinity of Bilbao on the top of Malmasin Mountain. Burials were found in the Artxanda ridge area as well whose age is about 6,000 years. Some researchers believe that Bilbao’s ancient settlement could be called Amanun Portus, mentioned by Pliny the Elder, or Flaviobriga described by Claudius Ptolemy.

Bilbao was one of the first cities founded in the 14th century – a period when about three-quarters of all Biscay cities were built one after the other.

Diego Lopez V de Haro is considered to be the founder of Bilbao – he published a city charter in 1300, which was approved by King Ferdinand IV of Castile, and founded a new city on the right bank of the Nervión River.

The next ruler, Maria Diaz I de Haro, expanded the trading powers and privileges of Bilbao with a new charter in 1310, making the port an obligatory stop for all cargo going from Castile to the sea. Bilbao then received exclusive trade rights with the city of Las Arenas in addition. John I of Castile further strengthened the city’s position in 1372, giving Bilbao a free port status and special privileges in the iron trade. This meant that in the future Bilbao would become an extremely important port associated with trade relations with Flanders and Great Britain.

Queen Joanna I of Castile ordered the Consulate of the Sea (Consulado del Mar) creation in Bilbao in 1511. The port of Bilbao has become one of the most important in the country thanks to this.

The capital of Biscay changed from Bermeo to Bilbao in 1602. A series of rebellions broke out around 1631 in the city against the salt taxes increase initiated by the Spanish Crown. The riot was suppressed and several of its leaders were executed.

Thanks to the iron deposits found, Bilbao has constantly developed economically, supplying iron ore to Europe.

Bilbao was captured and plundered by Napoleonic troops at the beginning of the 19th century. The French planned to annex the Basque lands to France, however, due to the Iberian War and, especially, the Battle of Vitoria of 1813, their plans were not destined to come true.

The Basque Country became one of the main battlefields during the First Carlist Civilian War in the 19th century. However, Bilbao developed actively in the 19-20 centuries despite the war, becoming the Basque Country’s economic center. It was during this period that railways were built and expanded, the Bank of Bilbao (subsequently becoming one of the largest banking institutions in Spain – BBVA) was founded, as well as the Bilbao Stock Exchange.

Bilbao’s steel industry flourished with many new plants being created, including Santa Ana de Bolueta and Altos Hornos de Vizcaya, created in 1902. The city was modernized with new streets and avenues, and modern buildings such as the City Hall, Basurto Hospital, and the Arriaga Theater appeared.

The Spanish Civil War began in Bilbao with a series of small uprisings that were crushed by republican forces. The city was first bombed by nationalist aircraft on August 31st, 1936. Nationalists scattered leaflets in September, threatening further bombing if the city would not surrender. Their threats were realized on September 25th, when German planes, dropped at least one hundred bombs on Bilbao in agreement with Franco’s forces.

Bilbao’s industrial growth continued and was accompanied by steady population growth after the war. The iron and steel industry revived over the next decade, becoming a strategically important industrial sector in Spain. Workers moved to Bilbao from other Spanish regions to work for metallurgical enterprises. Such massive migration led to the development of a slum area on the slopes of the hills, as well as the accession of neighboring municipalities to the city, as the demand for housing exceeded the supply significantly.

Several city projects were implemented in Bilbao in the 60s, new neighborhoods were created, such as Otxarkoaga, and a highway was built to the border with France. The University of Bilbao was founded in 1968, which was integrated into the University of the Basque Country later on.

De-industrialization and the transition to a service economy began in Bilbao in the mid-1990s, supported by investments in infrastructure and city renewal. The foundation for this became the Guggenheim Museum’s opening, after which other significant objects were erected and launched: the Euskalduna conference center, Santiago Calatrava’s Subisuri suspension bridge, the metro (the stations were designed by architect Norman Foster), Bilbao Tram, Iberdrola Tower, and others. The development plan for the Zorrozaurre artificial island, designed by Zaha Hadid, was approved in 2012.
Medieval Bilbao consisted initially of three walled streets (Somera, Artecalle, and Tendería), on the site of which Ronda Street now passes. There was a small monastery inside dedicated to the Holy Apostle James (now there is St. James’ Cathedral), which pilgrims visited on the road to Santiago de Compostela. Four more streets were built in the 15th century, forming the original Zazpikaleak (Old Town), known as “Seven Streets”. The city walls were demolished in 1571 after several floods and a major fire in 1569, which allowed for Bilbao’s further development and expansion.

Еngineer Amado Lazaro developed a project in 1861 to expand the then municipality (now it is one of the Bilbao districts) of Abando with wide avenues and traditional buildings. The Eixample district in Barcelona, designed by Ildefons Serda, was taken as an example. However, this excellent project was canceled by the city council, which considered it “utopian” and “excessive” because of its high cost.

The next major changes occurred in Bilbao in 1876, when the city annexed the neighboring municipality of Abando in several stages. The new modernization project was much more modest. Abando, in contrast to the Casco Viejo narrow alleys maze, had to become the Bilbao modern center, an area in the form of a grid of streets and equal quarters, with wide straight boulevards. The main avenue of the new district was Gran Via de Don Diego Lopez de Haro.

The modernization was half completed by the end of the 1890s, and the municipalities of Deusto and Begoña had been merged by 1925, as well as part of Erandio (the rest of Erandio became part of Bilbao in 1940). The last annexation took place in 1966 – Lujua, Sondica, Derio, and Zamudio joined Bilbao. Bilbao’s area reached a record size and amounted to 107 square km after that. However, all these municipalities regained their independence on January 1st, 1983 with the exception of Deusto and Begoña.

Old Town (Las Siete Calles or Casco Viejo in Spanish, Zazpikaleak or Alde Zaharra in Basque) – these are the different names of Bilbao’s medieval quarter, which is part of the Ibaiondo district. The names mean “Seven Streets” or “Old Town” respectively. This quarter, which included exactly 7 streets, which were connected by narrow alleys – cantons (kantoi / cantón), was surrounded by a wall until the end of the 19th century.

This area is considered to be the city’s most vibrant part due to the authentic architecture of Bilbao’s main sights, including several churches (Sant Anton, St John and St John, Santiago Cathedral, Sant Nicolas), many colorful shops and taverns, a large historical market (Mercado de la Ribera), the Arriaga Theater, the Basque Language Academy building (Euskaltzaindia), and the public library. One can access other parts of the city by the metro, tram, and bus from Casco Viejo. Three public elevators connect the Old Town with the Begoña and Solokoetxe districts, without which it would have been quite difficult to get there on foot.

Casco Viejo’s bars and restaurants are extremely popular not only with city guests but with local residents as well – the “bar hopping” tradition is very common here when middle-aged men move from bar to bar, drink a glass of wine (chiquitos) and sing songs in unison.

The business and financial district of Abando, covers most of the city center, across the river from the Old Town, on the Bilbao Estuary’s left bank.

The northern part of Abando, near the River Nervion (Abandoibarra means Abando shore in translation), has been restored and updated in recent years. There are the main Abando district (and the whole of Bilbao) attractions in this former industrial area now: the Guggenheim Museum, the Euskalduna Conference Center and Concert Hall, Isozaki Towers, Iberdrola Skyscraper, Azkuna Zentroa Multicenter, as well as many recreational zones and residential quarters.

The main city’s artery is Gran Vía de Don Diego López de Haro Avenue, which crosses the city center and is named after the founder of the city, Diego Lopez de Haro V, Lord of Biscay. It was conceived in 1876 when architects Alzola, Achuсarro and Hoffmeyer planned to expand the city (ensanche) on the wide plains of the former municipality of Abando. The avenue crosses Abando and connects it with Casco Viejo in the east and the San Mames district in the west. With a width of 50 meters, Gran Via de Don Diego Lopez de Haro stretches for 1.5 km. It begins on the Circular square, next to the BBVA building, passes through Moyua Square (Plaza Moyua), and ends on the Sacred Heart of Jesus Square (Plaza Sagrado Corazon de Jesus), in the center of which a statue of Christ stands. Bilbao’s main square – Federico Moyua Plaza is located in the middle of the avenue, about 500 meters from its beginning and 800 meters from the end. Gran Via de Don Diego Lopez de Haro Avenue is Bilbao’s most important commercial and business area, with BBK and BBVA headquarters here, and the famous Spanish department store El Corte Inglés occupying two buildings.

The Sabino Arana and Juan Antonio Zunzunegui avenues provide a direct route from the city’s central areas to the motorways, while Autonomia Kalea connects the southern districts with the eastern and western ones.