Bidache - the feudal castle ruins, which belonged to the Gramont Lords for centuries • ALL ANDORRA 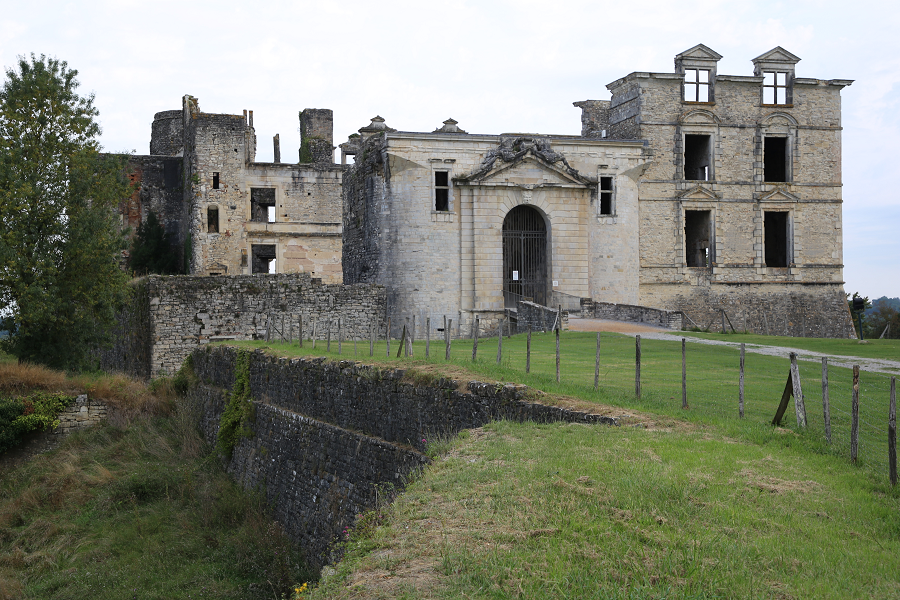 Bidache’s peculiarity was that it was located outside the borders of both France and Navarre, so the question of its belonging remained open for a long time.

The king of Navarre captured the fortress in the first half of the 13th century, and the King of England troops captured it later.

Gramont Lords decided to settle in Bidache. The first castle mentioning dates from 1329. It was an impressive and monumental structure, a symbol of the Gramont Lords’ power.

The castle faced several attacks and fires over the centuries, including the terrible attack of 1523 led by Charles V (Charles Quint). During this attack, the three hundred castle defenders preferred “to die in the fire or rush off the walls and die pierced by peaks than surrender to the enemy.” Castle was seriously damaged. The large round tower to the north-west (it is also a dungeon) and two towers at the entrance are the only remnants of a medieval castle, although restored.

The burnt medieval castle was replaced by a Renaissance castle: it is a undemonstrative classic-style decor with simple symmetrical lines. Gabriel Bourgoing was the first famous castle architect (there is no information about previous architects).

The 16th century elements that are still preserved are the square bulk of the building, called the “main house”, which is located between the two courtyards.

Each generation of Gramont Lords brought decorations to their castle. The castle, which performed defensive functions until the 16th century, was turned into a resort residence in the 17th century. An architectural ensemble was created in front of the castle, gardens were laid out, and a high entrance gate appeared, decorated with the Gramont family coat of arms.

It is known that the king’s architect Louis de Milhet worked on the castle in the 17th century – he is the Bayonne fortification plan author. Louis de Milhet, in particular, supervised the “theater” court creation.

Other changes include the Grand Marshal’s Pavilion (to the right of the entrance gate), as well as the Imperial Pavilion (visible from the road leading to the castle).

Cardinal Mazarin, Prime Minister under Louis XIV, lived in the castle until the famous Treaty of the Pyrenees, which secured the peace concluded between Spain and France in 1659, was signed. Cardinal Mazarin called the large staircase built inside the castle “the most beautiful staircase in France”, which, unfortunately, has not been preserved.

The Bidache Castle magnificence was known throughout the kingdom. It greeted pompously Antoine de Bourbon, the Duke of Vendôme and the husband of Queen of Navarre, Jeanne d’Albret, the mother of the future Henry IV, and Catherine de’ Medici, and her son Charles IX.

In the 17th century, Antoine III de Gramont, Marshal of France, Minister of State, King’s Ambassador to Frankfurt and Madrid, was the last owner of Bidache Castle, which was buried there. His descendants, attracted by Versailles, left Bidache at the end of the century.

The castle was turned into a hospital in 1793.

A fire destroyed it completely in 1796. It was never restored despite several attempts.

The feudal castle is ruined today.

It was classified as a historical monument on May 6th, 1942.

Open for visits (excursions only)

April, May, June: Wednesday and Saturday at 16 o’clock.

September and from October 1 to November 2 inclusive: on Wednesdays and Saturdays at 16 o’clock.