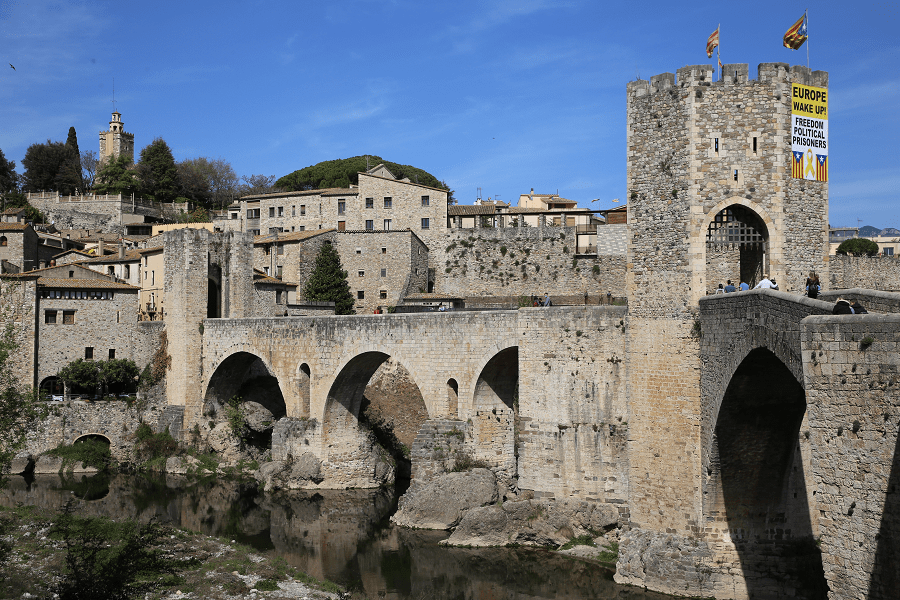 Besalu (cat. Besalu) is a city and municipality in Spain, la Garrotxa region, province of Girona, Catalonia. From its origins, Bisuldunum was a fortress between two rivers: the Fluvia in the south and the Capellades in the north.

The old town of Besalu is an architectural site declared a cultural heritage of national interest. In 1979 it was declared a “national ensemble” for its great architectural value. The scattered remains of the walls and fortifications of medieval Besalu have survived, often inside later buildings. It is known that the first walls protected the castle and its outbuildings. An example of this is the Portal de la Força on the Carrer del Comte Tallaferro.

In the twelfth century, a new fence surrounded the Jewish quarter, the church of San Vicenç i Vilarrobau (cat.església de Sant Vicenç i Vilarrobau), outside the monastery of Sant Pere (cat. Sant Pere), which was finally included in the last fortified building of the XIV century.

In addition to the old parish of Sant Vicenç de Besalu, the church of Santa Maria de Besalu, the monastery of Sant Pere de Besalú and the Besalú bridge (cat.pont de Besalú) across the Fluvia, the Romanesque façade of the church of Sant Julia de Besalú should be highlighted (cat. l’església de Sant Julià de Besalú) and the house of Llaudes or Cornellà on the Prat de Sant Pere. During the Gothic period, buildings appeared in Plaça de la Llibertat, belonging to the Royal Curia, and Can Cambó in rue Carrer Major, recently restored.

Recently, the Heritage Service of the Generalitat of Catalonia has developed a special plan for the protection and development of the historic center of Besalu, which has not yet been approved.

The origin of the city was the Besalu Castle, which is already documented in the tenth century, built on the hill where the remains of the Church of Santa Maria are located in the Middle Ages.

The current layout of the city does not correspond to its original state, but allows you to see the urbanization of the Middle Ages with the presence of important buildings: a bridge, Jewish baths, the church of the monastery of Sant Pere de Besalu and Sant Julia (cat. Sant Julià), a former hospital for pilgrims, houses Cornella, the Church of San Vicens and the Gothic Hall of the Royal Palace of the Curia.

Besalu is an architectural and urban structure that is quite consistent with the medieval past. The monumental significance of Besalu is given, first of all, to its great value as a complex, one of the most important and unique examples of medieval scenery in Catalonia.

The Besalu Museum of Miniatures and Microminiatures (cat. Museu de Miniatures i Microminiatures de Besalú) is located in the building of the old Cal Coro textile factory, next to the San Pere Monastery. It features over 2,000 miniatures and microminiatures by artists from around the world, organized thematically. It is one of the most complete and varied collections in Europe and the first of its kind in Catalonia.

The Besalu Synagogue (cat. Sinagoga de Besalú) is an archaeological site. It includes the remains of an ancient medieval synagogue, mikveh or ritual baths, a courtyard and a prayer hall.

In 2013, the entire Besalu Synagogue was declared a Cultural Site of National Interest (BCIN) in the category of archaeological excavations by the Department of Culture of the Generalitat of Catalonia.

The city is famous for its installation in the form of chairs on the walls – these are chairs for witches. Many centuries ago, people believed in the existence of witches and in every possible way tried to protect themselves from their evil spell. To do this, the smartest residents of the city decided to nail two chairs to the wall of one of their houses so that the witches, flying by, could sit down and rest without annoying the residents of the city.

Several episodes of the film “Perfume” based on the novel by Patrick Süskind were filmed in Besalu.

A visit to Besalu would be incomplete without buying souvenirs and gifts! Compared to other villages of La Garrotxa, the city has a lot more souvenir shops, which indicates that it is a more popular destination among tourists.

Most of them sell only local produce and merchandise.

The city has one restaurant with one Michelin star: Old bridge, Pont Vell 24, 40 – 60 EUR • Traditional cuisine.