The autumn session of the OSCE Parliamentary Assembly began its work in Andorra • All PYRENEES · France, Spain, Andorra 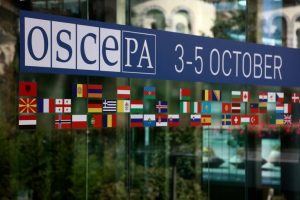 The autumn session of the OSCE Parliamentary Assembly began its work in Andorra, which will be held for three days – from 3 to 5 October. The session will include a forum “Mediterranean Sea”, whose goal is to promote the rapprochement of the OSCE member states with six members of the Mediterranean space: Algeria, Morocco, Egypt, Israel, Jordan and Tunisia.

The main topics of the session are cybersecurity, economics, ecology and education.

Andorra has been a member of the OSCE since 21st November, 1995, and since then has been participating annually in the work of the parliamentary assembly.

The OSCE Parliamentary Assembly consists of 57 national parliaments (320 parliamentarians) and 11 states of the Mediterranean and Asian regions cooperating with Europe.

The delegation of Andorra consists of two members and two alternates.