Antoni Martí discussed with the leaders of the parties of Andorra the results of the negotiations with Eurocomission on the association agreement with the EU • All PYRENEES · France, Spain, Andorra 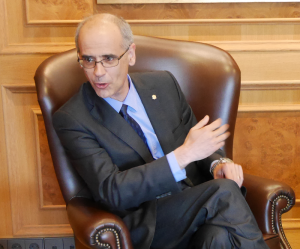 Andorran Prime Minister Antoni Martí discussed with the leaders of the parties of Andorra the results of the negotiations with European Comission on the association agreement with the EU . The meeting was attended by the representatives of the Liberal Party (Josep Pintat, Joan Carles Camp and Carles Naudi), a coalition of the Social Democratic Party + Union of “Progress” (Víctor Naudi and Sílvia Bonet), as well as the leader of the Social Democrats Pere López.

Antoni Martí informed the parties’ representatives on the progress of talks in Brussels on 6th October with the European Commission president Jean-Claude Juncker, President of the European Council Donald Tusk, as well as with co-Princes of Andorra (Bishop Joan-Enric Vives and French President François Hollande) on 24th October.

Among the issues discussed at the meeting by Antoni Martí and parliamentarians, was also the question of health care reform, as well as the promotion of Andorra as a candidate to host the XXVII Summit of heads of Ibero-American States in 2020.