Antoni Martí held a traditional meeting with the media at the end of the year • All PYRENEES · France, Spain, Andorra 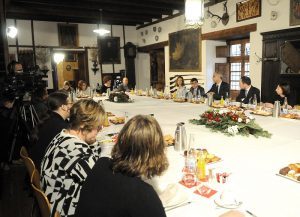 On 23d December the Head of Government of Andorra Antoni Martí held a traditional breakfast with the media at the end of the year. The event took place at the historic building of the museum Casa Museu d’Areny-Plandolit in Ordino. The meeting was attended by Finance Minister Jordi Cinca, the Minister of Justice, Social and Internal Affairs Xavier Espot, Minister of the Environment and Agriculture Silvia Calvó and the newly appointed Minister of public relations and administrative reforms Eva Descarrega.

Talking about health care reform, Antoni Martí noted that before making a decision to impose an additional tax in order to get more funds for the healthcare system, the Andorran Government would study the issue in detail, as well as the possible consequences.

Talking about the reform of police and state administration, the Prime Minister noted that the mission was now in charge of the new Minister of public relations and administrative reforms Eva Descarrega.

During a business breakfast with representatives of the media the head of the Andorran government also paid attention to the agreement on the association of Andorra with the European Union. He pointed out that “it is a long and complex process, which affects all sectors of the economy and business, as well as the social sphere. This is, in particular, a question of freedom of movement of goods”. Antoni Martí recalled that “the Government plans to hold a referendum to know the Andorran citizens opinion on the matter”.

Speaking about the current economic situation, the head of the Andorran government reported that gross domestic product (GDP) will amount to about 1% this year. “These data confirm that the economy is recovering from the crisis of Andorra during last few years. This is evidenced by a reduction in unemployment,” he concluded.