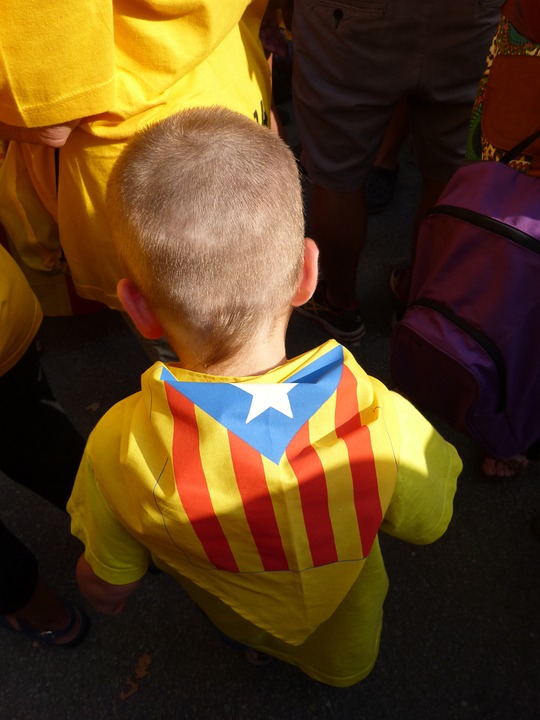 “My name is Luke, I’m 13 years old and I live in Andorra,” says a young man with long hair and a flag of Catalonia in his hand. And he continues: “My parents are Catalans. They told me that they considered unfair what was happening in Catalonia, I read the local newspapers and decided to accompany them today, ” he added.

On the Andorran street in front of Spanish Embassy there was a crowd of children, youth and adults. All of them demand the freedom of those who are called “political prisoners.” “What is happening is a threat to all Spaniards,” comment in the crowd. Comments are heard: “This is a pure manifestation of dictatorship.”

Among the slogans we can hear “Freedom for political prisoners!”, “You are not alone!” Or “This is unfair!” “Andorra cannot remain indifferent because we are neighbors,” comments Carmina Figuera, and adds: “It’s a pity that the government does not render public supporting democratic action such as voting. ”

Andorrans and residents of Catalonia who live in Andorra took part in protests against the sentence to the organizers of the referendum on the independence of Catalonia. The most severe sentence was handed down to the former deputy chairman of the general government (highest self-government body) Oriol Junkers – 13 years in prison. The charge required 25 years in prison.

Former regional government advisers Raül Romeva, Jordi Turull i Dolors Bassa were sentenced to 12 years. The ex-speaker of the Parliament of Catalonia and community leaders received from 9 to 11.5 years . The court found the other three former members of the government guilty only of disobedience and ordered them to pay fines of 60 thousand euros.

The reaction to the verdict did not take long. The Catalans immediately mobilized and took to the streets. Protests were shown on social networks, videos laid out visible one by one. Demonstrators blocked roads, barricades were built on the carriageway. In Barcelona, some metro stations were closed, and the railway connection was partially interrupted.

The epicenter of the riot was El Prat Airport. The police tried to stop the crowd with batons, moving towards the entrances to the terminals. More than 100 people turned to doctors for help, several dozen flights have already been delayed.

The action at the airport is held for the first time. “This fact will be immediately noticeable, people from outside of Spain will see what is happening and disseminate information through friends and family members. The Supreme Court’s ruling is unfair, people took to the street because they were outraged, ”said protesters in Andorra.

The results of the events of recent months are proof that the “system is collapsing,” and the situation in the country is becoming more polarized.” People are convinced that their will must be taken into account.

“What happens in Catalonia is directly related to Andorra because of the proximity and because Andorra and Catalonia are connected. Andorra shares with Catalonia the language and many traditions, ”commented the protesters.

The shares plan to continue on October 17 and 18.