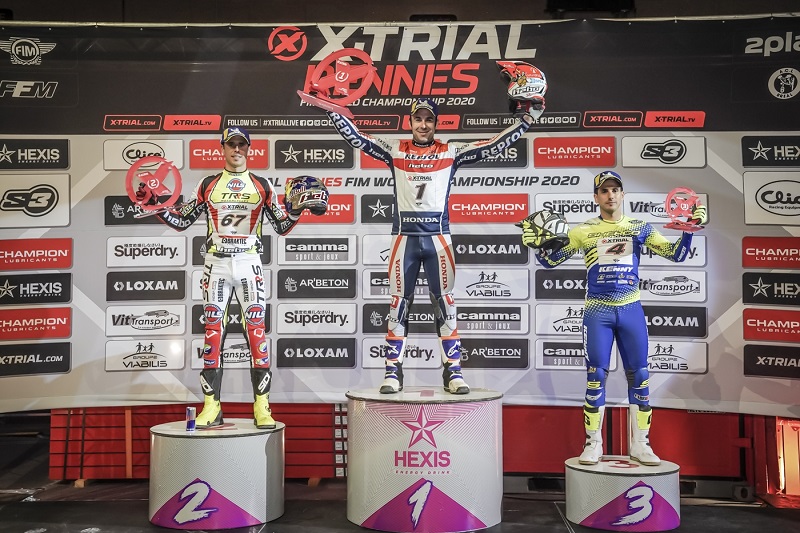 The first ever X-Trial Rennes, witnessed by over 3,500 spectators that packed in to the Glaz Arena, saw Toni Bou (Repsol Honda) continue his reign, extending a ten-point World Championship lead into the mid-winter break. Following his La Réunion victory over main rival Adam Raga (TRRS) a week ago, this was an even more dominant performance in a Final that demanded the absolute maximum of both competitors.

Bou immediately seized the upper hand by completing Section One with a mere two-mark score, following on from Raga who had dropped five with the first of a troubling run of consecutive fiascos. Even Bou found Section Two impossible, but it wasn’t long before he was back on the march: gaining seven marks on Raga over Sections Three and Four to all-but confirm his victory. Finishing with a flourish, Bou recorded the only clean of the Final in the closing section, officially opening the party in Rennes.

Jeroni Fajardo took an important third position that ensures his participation in X-Trial Budapest when the Championship gets back underway in January. The veteran enjoyed a successful first outing on the Sherco, battling through a hard-fought Heat One against Jaime Busto and then overcoming his Vertigo teammate Miquel Gelabert in a Consolation Final that went down to tie-break.

In a close-fought first Round, debutant Toby Martyn (Beta) suffered a baptism of fire after a mechanical problem forced him onto his spare bike. Meanwhile Gabriel Marcelli (Montesa) failed to recapture his promise from the preliminary phase in La Réunion as he bowed out early in a competitive field at X-Trial Rennes, albeit by just two marks.