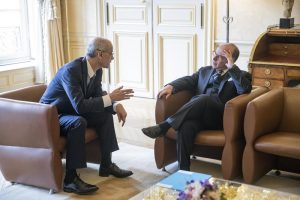 Andorran PM Antoni Martí and his French colleague Bernard Cazeneuve signed a bilateral agreement on improving road traffic between the countries. According to the document, Andorra undertakes to participate in financing the access road to the principality in order to prevent avalanches, in particular, in the Hospitalet area.

The total cost estimate is 21 million euros, France and Andorra will share the budget equally. Works will last six years. In 2018, both sides will shake 1.5 million euros for the construction of four parking lots, where it will be possible to prepare vegicles with special equipment (snow chains). During next five years, Andorra and France will invest in improving the road 2 million euros.

The signed agreement is part of a global project to improve the national road RN20. The total investment of France is estimated at 136.9 million euros.

Within the framework of the meeting, Andorra and France noted good relations between the countries. Anthony Marti also expressed his gratitude to the French president and co-prince of Andorra, Francois Hollande, stressing that he has always contributed to the process of reforming Andorra.