Andorran delegation meets co-princes of the Principality to discuss negotiations with the EU on the agreement on free trade unions • All PYRENEES · France, Spain, Andorra 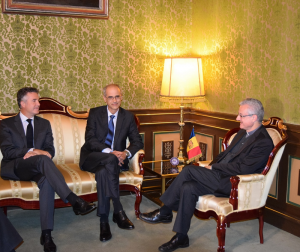 The aim of the meetings – informing the co-princes of Andorra on the political and economic situation in the country, as well as the promotion of negotiations with the European Union on the agreement on free trade unions within the EU.