Andorran College of architects signed an accession agreement to participate in the architectural strategy of the country • All PYRENEES · France, Spain, Andorra 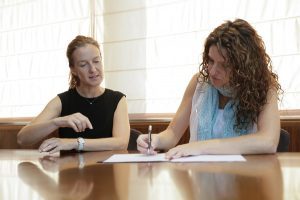 The minister of Environment and Agriculture Silvia Calvó and the head of the Andorran College of architects Zaira Nadal signed an accession agreement, which allows Andorran architects to participate in the architectural strategy of the country. The document was originally signed in 2012 and relates to the period 2013-2020.

It includes the construction of new roads and tourist facilities in the mountains, villages and towns of Andorra. The document requires developers to take into account the particularities of the principality’s landscape.

Silvia Calvó thanked the Andorran College of architects for the decision to favour the agreement.

Zaire Nadal, in her turn, reiterated the desire to work together and stressed the importance of a collective approach to the architectural development of the principality.