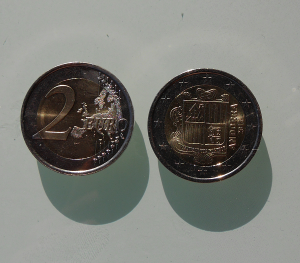 According to the Andorran Minister of Finance, Jordi Cinca, 40,000 sets of Andorran coins in denominations of 1 and 2 euros and 50, 20, 10, 5, 2 and 1 cents issued in 2015 were presented to the Andorran market. The order of 37,110 sets was delivered. 4,500 sets will be distributed within Andorra to 12 numismatic shops. The remaining kits will be distributed on the international market by 204 companies from 22 countries.

The same method will be used for the distribution of 85,000 coins of 2 euros, issued to commemorate the 25th anniversary of the signing of the customs agreement with the European Union.

The same number of coins was issued in honor of the 30th anniversary of the recognition of 18 as the age of majority.